With half-term coming up BritishTheatre.com highlights some of the best shows for children and families in London’s West End. 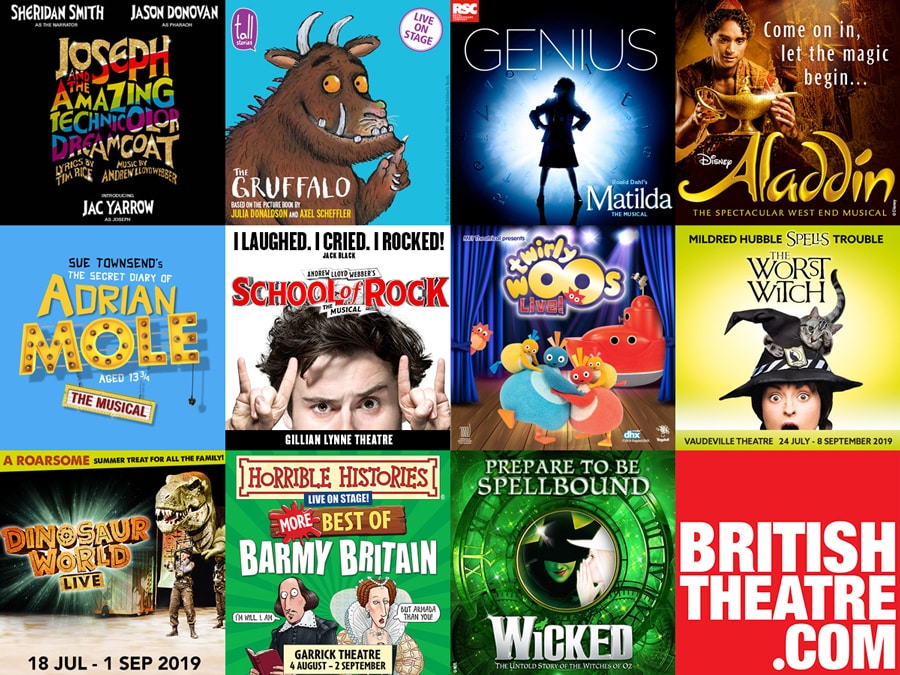 Check out our selection of shows for all ages that are taking place in and around London’s West End this half term.

A new production of Andrew Lloyd Webber and Tim Rice’s multi-award winning musical is returning to The London Palladium in summer 2019 for a strictly limited run!

Joseph and the Amazing Technicolor Dreamcoat features songs that have gone on to become pop and musical theatre standards, including Any Dream Will Do and Go Go Go Joseph.

Jason Donovan returns to the West End to play the Pharaoh, with Sheridan Smith as the Narrator and Jac Yarrow making his West End debut in the title role.

BOOK TICKETS TO JOSEPH AND THE AMAZING TECHNICOLOR DREAMCOAT

‘Packed with wit, storming songs and beautiful costumes’ (The Guardian), Wicked imagines an ingenious backstory and future possibilities to the lives of L. Frank Baum’s beloved characters from The Wonderful Wizard of Oz and reveals the decisions and events that shape the destinies of two unlikely University friends on their journey to becoming Glinda The Good and the Wicked Witch of the West.

A timeless tale of teenage angst, family struggles and unrequited love, told through the eyes of tortured poet and misunderstood intellectual Adrian Mole. One of the most enduring comedy characters of all time, he’s the hapless, hilarious, spotty teenager who captured the zeitgeist of 1980s Britain.

BOOK TICKEtS FOR THE SECRET DIARY OF ADRIAN MOLE

Matilda is a captivating musical that revels in the anarchy of childhood, the power of imagination, and the inspiring story of a girl who dared to change her destiny. This magical show is pure escapism for all ages and the lead performance of the young Matilda has to be seen with your own eyes to believe. Never before has such a young talent filled a West End stage so magnificently.

Based on the iconic, hit movie, this irresistible new musical follows Dewey Finn, a failed, wannabe rock star who decides to earn an extra bit of cash by posing as a supply teacher at a prestigious prep school. There he turns a class of straight-A pupils into a guitar-shredding, bass-slapping, mind-blowing rock band. But can he get them to the Battle of the Bands without their parents and the school’s headmistress finding out? With a new score from Andrew Lloyd Webber, lyrics by Glenn Slater, book by Julian Fellowes and the original songs from the movie, School Of Rock is musical treat for all ages.

BOOK TICKETS TO SCHOOL OF ROCK

Disney’s Aladdin has “landed triumphantly in London’s West End” (Daily Telegraph). Featuring all the songs from the Academy Award-winning classic film, this “shining, shimmering spectacle” (Huffington Post) is everything you could wish for and more.

A mouse took a stroll through the deep dark wood… Join Mouse on a daring adventure through the deep, dark wood in Tall Stories’ magical, musical adaptation of the classic picture book by Julia Donaldson and Axel Scheffler.

Searching for hazelnuts, Mouse meets the cunning Fox, the eccentric old Owl and the high-spirited Snake. Will the story of the terrifying Gruffalo save Mouse from ending up as dinner for these hungry woodland creatures? After all, there’s no such thing as a Gruffalo – is there?

Songs, laughs and monstrous fun for children aged 3 and up and their grown-ups, in the much-loved show that’s toured Britain and the world! Running time 55 minutes (no interval)

BOOK TICKETS FOR THE GRUFFALO

Mildred Hubble was an ordinary girl who found herself in an extraordinary place: a school for witches. Now in her final year, accident prone Mildred and her fellow pupils are about to embark on their biggest and most important adventure yet…

Jealous Ethel Hallow is always out to spoil Mildred’s fun. Miss Hardbroom is opposed to all fun in general. And just as Mildred sparks some inevitable mayhem certain to upset them both, an old enemy returns with a plan for revenge that could threaten not just the Academy, but the whole world.

BOOK TICKETS FOR THE WORST WITCH

We all want to meet people from history! The trouble is everyone is dead!

So it’s time to prepare yourselves for Horrible Histories live on stage with the smash hit production of Barmy Britain – Part Four! Would you be shaken or stirred by Richard III? Mount a mutiny against King Henry VIII! See Mary Tudor knock the spots off Mary Queen of Scots! Will Queen Elizabeth I endure her terrible teeth? Would you be hanged by King James I for being a witch? Peep into the world of Samuel Pepys and help Georgian detectives find the headless man! Take a trip into the night with the night soil men and discover how to survive the first ever train ride! After seven sensational years in the West End, Barmy Britain is back!

From the producers of The Very Hungry Caterpillar Show and Sarah and Duck Live on Stage comes another enchanting show for young audiences. Toodloo, Great BigHoo, Chickedy, Chick and Peekaboo welcome young fans in a brand-new theatrical adventure, as the Twirlywoos embark on a new adventure onboard their Big Red Boat.
Expect mischief, music and plenty of surprises as they share the delight of discovery. With beautifully inventive puppetry the show promises a cast full of all your favourite characters from the hit TV show.

Dare to experience the dangers and delights of Dinosaur World Live in this roarsome interactve show for all the family.

Grab your compass and join our intrepid explorer across unchartered territories to discover a pre-historic world of astonishing (and remarkably life-like) dinosaurs. Meet a host of impressive creatures, including every child’s favourite flesh-eating giant, the Tyrannosaurus Rex, a Triceratops, Giraffatitan, Microraptor and Segnosaurus!

A special meet and greet after the show offers all our brave explorers the chance to make a new dinosaur friend.