Producers of the 50th anniversary production of Hair have announced that the show will extend its run for a further six weeks to 14 January 2018. 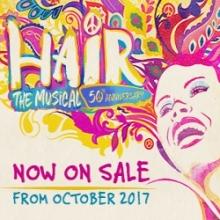 Hair opens at The Vaults in London on 4 October 2017 following an acclaimed season at the Hope Mill Theatre in Manchester. Directed by Jonathan O’Boyle, this new production will take advantage of the Vaults immersive space.

Hair has a book and lyrics by James Rado and Gerome Ragni with music by Galt McDermott.