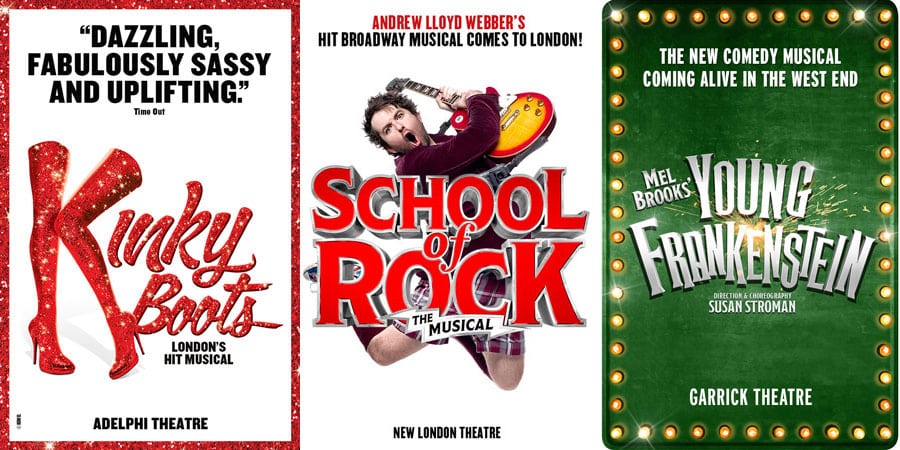 KINKY BOOTS – SAVE UP TO 57%
Book before 28 February.
The summer’s hottest musical Kinky Boots at the Adelphi Theatre is now strutting into its third fabulous year with Emmerdale star Verity Rushworth joining the cast along with Simon-Anthony Rhoden as Lola and David Hunter as Charlie Price.

Inspired by true events, Kinky Boots takes you from a gentlemen’s shoe factory in Northampton to the glamorous catwalks of Milan. Charlie Price is struggling to live up to his father’s expectations and continue the family business of Price & Son. With the factory’s future hanging in the balance, help arrives in the unlikely but spectacular form of Lola, a fabulous performer in need of some sturdy new stilettos.

Winner of the 2017 Olivier Award for Outstanding Achievement in Music, School of Rock the musical has truly landed in London’s West End.

Based on the iconic, hit movie, this irresistible new musical follows Dewey Finn, a failed, wannabe rock star who decides to earn an extra bit of cash by posing as a supply teacher at a prestigious prep school. There he turns a class of straight–A pupils into a guitar-shredding, bass-slapping mind-blowing rock band. But can he get them to the Battle of the Bands without their parents and the school’s headmistress finding out?

BOOK NOW FOR SCHOOL OF ROCK

YOUNG FRANKENSTEIN – SAVE UP TO 65%
Terms and Conditions Apply

Grandson of the infamous Victor Frankenstein, Dr. Frederick Frankenstein (pronounced ‘Fronk-en-steen’) inherits a castle in Transylvania leading him to fulfill his grandfather’s legacy by bringing a corpse back to life. With help and hindrance from hunchback henchman Igor, buxom assistant Inga and needy fiancée Elizabeth, his experiment yields madcap success and monstrous consequences.