The cast of Salad Days will be led by Lowri Hamer as Jane and Laurie Denman as Tim. Both are making their professional debut having recently graduated from Guildford School of Acting. They will be joined by Maeve Byrne as Asphynxia, Darrie Gardner as Mrs Dawes, James Gulliford as Nigel, Emma Lloyd as Rowena, Lewis McBean as Tom/Fosdyke, Sophie Millett as Lady Raeburn, Karl Moffatt as Uncle Clam, Tom Norman as Boot, Stephen Patrick as The Inspector, Francesca Pim as Fiona, James Seickell as Troppo, Tom Self as The Tramp and Ashlee Young as Marguerite. 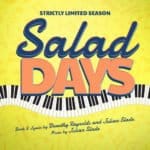 Salad Days is the delightful story of recent graduates Tim and Jane in the midst of a sunny summer in 1954. Glum with their overbearing and pushy parents insisting that they ‘find themselves something to do’, Tim and Jane take on a job looking after a piano in a park. Little are they prepared to deal with the magic that follows, getting them into all kinds of musical trouble and choreographic hilarity. Madness ensues!

For the full 1950’s ‘picnic in the park’ Salad Days experience, there will be special limited-availability front row ‘PICNIC’ seats from which audiences can enjoy front-row action from cushions and blankets spread on the floor.