Sir Tim Rice, Stuart Brayson and cast members of the West End production of From Here To Eternity are to appear in a special one night only reunion. 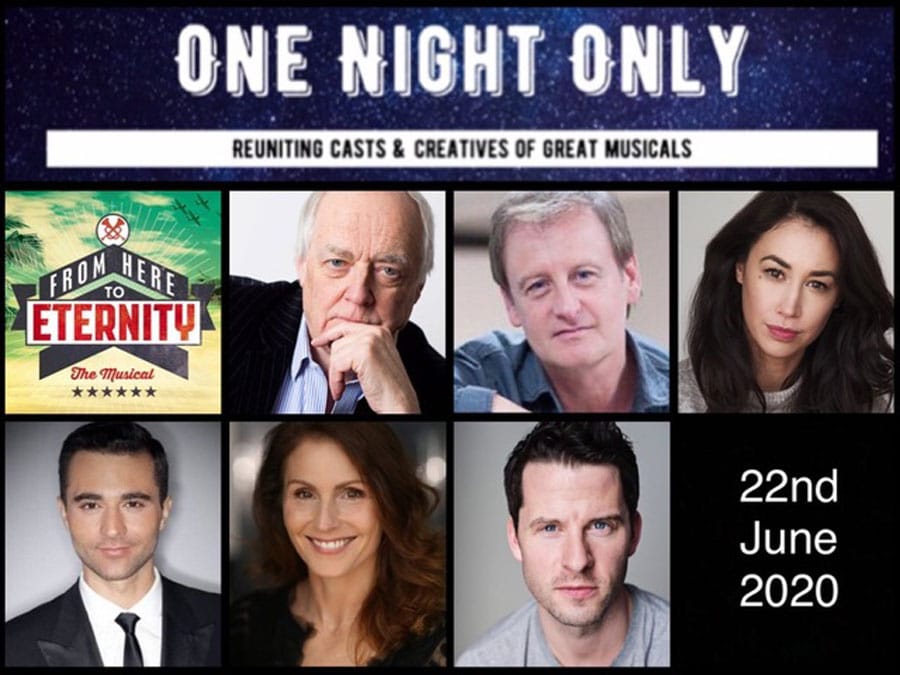 SimG Productions and Musical Theatre Radio have joined forces to present ‘One Night Only’ on Monday 22nd June at 7.30pm (GMT). This unique, virtual, interactive event will reunite cast and creatives from the original West End production of ‘From Here To Eternity’, including writers Sir Tim Rice and Stuart Brayson, and original cast members Darius Campbell, Siubhan Harrison, Rebecca Thornhill and Robert Lonsdale.

Hosted by director/producer Simon Greiff, the ‘virtual’ evening will feature a live Q&A with the guests, performances from songwriter Stuart Brayson, and a post-show virtual stage door mix and mingle with some of the guests.

‘One Night Only’ is taking the virtual theatrical experience to another level. Imagine a cabaret with tables so you and your friends can sit and talk. Fans of ‘From Here To Eternity’ can jump from table to table meeting other lovers of musical theatre from around the world. This is not a streaming event, but a one-time ‘live’ experience – the next step in the evolution of theatre.

From every ticket sold, a percentage will be donated to Acting For Others who provide financial and emotional support to all theatre workers in times of need through the 14 member charities.

‘From Here To Eternity the Musical’ was based on the original novel by James Jones, with music and lyrics by Sir Tim Rice and Stuart Brayson, and book by Bill Oakes. The original London production played at the Shaftesbury Theatre from October 2013 to March 2014, and was directed by Tamara Harvey, with choreography by Javier De Frutos, orchestrations by David White, set and costume design by Soutra Gilmour, lighting design by Bruno Poet and sound design by Mick Potter.