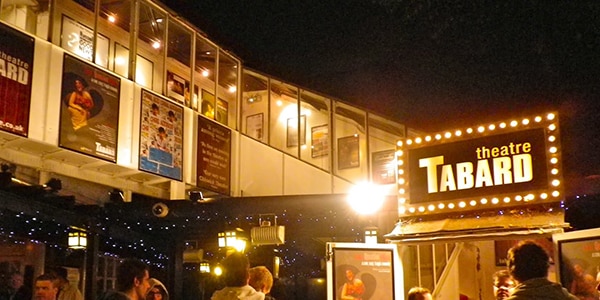 The Chiswick Playhouse is located above the Tabard Pub.

The theatre opened in 1985, founded by a collective of playwrights. Since its opening, it has established a reputation for the presentation of new writing and experimental theatre, as well as hosting stand-up comedy performances (comics who have played the theatre include Dara O’Briain, Al Murray, Russell Howard, and Chris Addison).

Pulling Focus Ltd took over the theatre in 2005 and began extensive refurbishment (now completed). From 2007, the theatre began producing in-house to some acclaim (both New Boy and Wolfboy transferred to the west end in 2009 and 2010 respectively).

A popular local venue, Chiswick Playhouse may be a small space but it has big ambitions and promises a fantastic opening season to mark its exciting relaunch.

Chiswick Playhouse will produce new work as well as reimagining classic stories. It will create its own in-house productions and bring shows of West End calibre to West London at a fraction of the ticket price!

Mark Perry, Executive Director of Chiswick Playhouse, comments, Having been a Chiswick
resident myself for over 15 years, I’m aware of the remarkable history of artists and theatre practitioners that have lived and worked in the area. By changing the name, we want to demonstrate our pride in our local heritage and ensure that the local community recognises the venue as Chiswick’s local theatre.

Otherwise, please click here to continue to the Chiswick Playhouse...
x
Send this to a friend