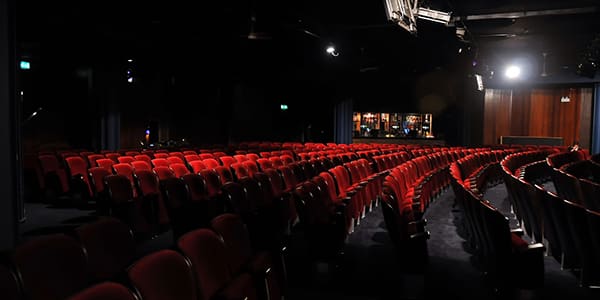 The building that became the Leicester Square Theatre originally opened as a French cultural centre called the Notre Dame Hall in 1953. In the 1960’s it became a music venue called the Cavern in the Town before returning to its original name in the 1970’s. It presented an exciting line up of punk music including The Sex Pistols and The Clash, who previewed material from London Calling in the space in 1979.

It continued to host music until 2001, when it was converted into a theatre and renamed The Venue. Notable productions during this period were Taboo, Round the Horne, and The Vegemite Tales.

The theatre was renamed the Leicester Square Theatre and opened in August 2008 with a 12 week run of Joan Rivers’ one woman show. Since then, it has become one of London’s most prestigious venues for comedy, cabaret, and music. Comedians to grace the theatre include Bill Bailey, Richard Herring (who regularly records a podcast in the venue), Russell Howard, Julian Clary, and US comics Sandra Bernard, Roseanne Barr, Chris Hardwick, and Doug Stanhope.

The theatre also runs the New Comedian of the Year competition. The theatre’s main house seats 420, while the accompanying basement space (suitable for smaller acts) seats 60.

Get social with Leicester Square Theatre:

Otherwise, please click here to continue to the Leicester Square Theatre...
x
Send this to a friend