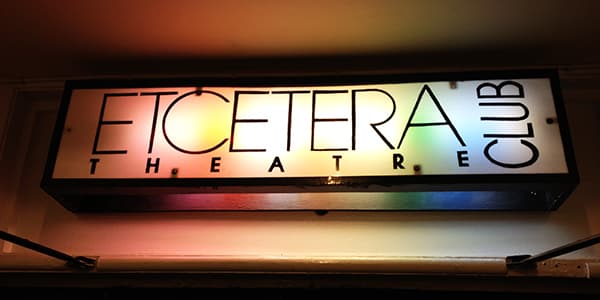 The Etctetera Theatre was founded by David Bidmead in a function room above the Oxford Arms pub. Since its inception, the 42-seat space has hosted over 2,500 productions of theatre and comedy.

Notable stage productions include the previews of Stefan Golaszewski Speaks About A Girl He Once Loved, the stage debut of Blue Jam by Chris Morris, and the premieres of Bill Hicks: Slight Return, What I Heard About Iraq, and Kafka’s Dick. Comedians to have used the space as warm-up venues include Simon Amstell, Robin Ince, Bill Bailey, Russell Howard, and We Are Klang.

Until 2004, the theatre had its own in-house production company. Etecetera Theatre Company won a Guinness Ingenuity Award in 1996.

The theatre hosts a number of festival seasons including an Edinburgh Fringe Preview Season, the One Person Play Festivals, the Festival of European Culture, and the Together Alone Season.

The Etcetera remains a popular space for new writing and comedy.

Get social with Etcetera Theatre: