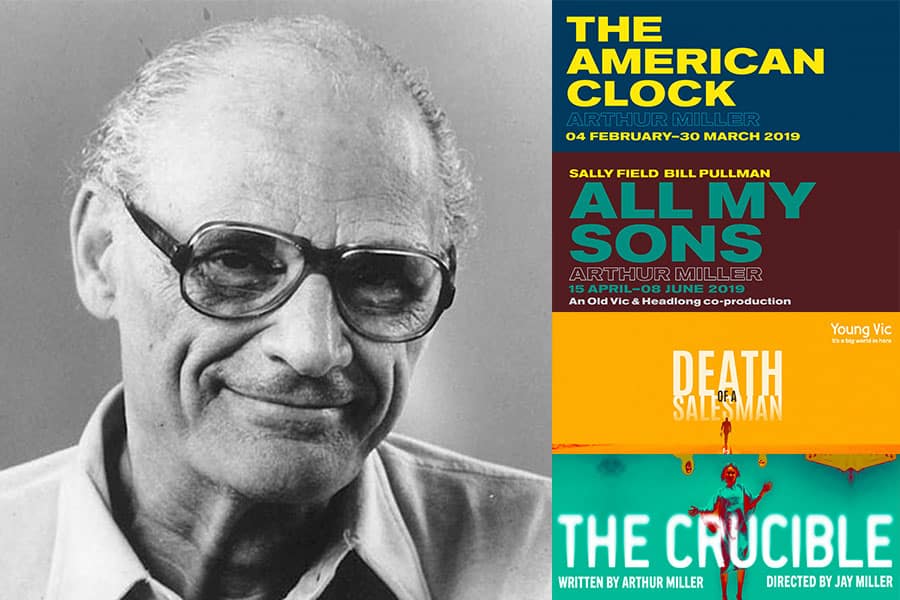 There is so much theatre I’m looking forward to this year, regionally, in London and on the Fringe. It’s always difficult to pick out the potential hits of the year, but two well established names will dominate much review coverage in London. One is Pinter, with the Pinter at the Pinter season now crossing the half way mark and continuing with Pinter 5.6 and 7, with the much anticipated Martin Freeman/Danny Dyer pairing in The Dumb Waiter, and Tom Hiddlestone afterwards in Betrayal. But it’s Arthur Miller that will enjoy an almost festival like staging of his greatest plays, and they all offer superb acting, directors and staging.

The Old Vic gets this informal season off with a staging of Miller’s epic play about the stock market crash in 1929 and the subsequent Depression of the 1930s. As with all of Miller’s great plays, society is examined through the experiences and stories of a central family, here the Baums, and has a soundtrack of jazz and period music. I saw the National Theatre production n 1986, indicating how rarely this play is performed, and the director is Rachel Chavkin, whose production of Hadestown is currently delighting audiences at the National. It’s a real opportunity to experience an underrated Miller, and runs from 4th February- 30th March.

BOOK TICKETS TO THE AMERICAN CLOCK

Just pipped by the Old Vic on London’s West End arrives the Theatre Royal Bath’s production of The Price, marking the play’s 50th anniversary.  Victor and Walter Franz meet in the attic of a condemned New York brownstone with the aim of selling some of their family possessions. Watched over by the wily furniture dealer Gregory Solomon, the brothers are party to revelation after revelation, by which they slowly come to realise the consequence of their past decisions. The cost of the furniture is overwhelmed by their life choices many years ago. David Suchet returns to the role of Gregory Solomon, and Brendan Coyle again plays Victor, superb casting. At the Wyndhams Theatre  5th February- 27th April.

BOOK TICKETS TO THE PRICE

ALL MY SONS – OLD VIC THEATRE

Following The American Clock, The Old Vic returns to a Miller classic. Sally Field. Bill Pulman. On stage together. Does there need to be more incentive to see this production? Oh yes, it’s a co-production with the mighty Headlong and directed by Jeremy Herrin! This should be one of the finest ensembles of the year, with Jenna Coleman and Colin Morgan in the cast, and the play is a powerful examination of guilt and buried secrets. I’ve seen the play a few times, and I can’t wait to see the mighty Sally Field tackle the unfolding drama. April 15th– 8th June.

BOOK TICKETS TO ALL MY SONS

DEATH OF A SALESMAN – YOUNG VIC

Arguably Miller’s greatest play, and what arguably could be the production of the year, the Young Vic, (the best London theatre of 2018), present an all black cast in Miller’s powerful destruction of the American Dream. Directed by Marianne Elliott, perhaps the finest director working at the moment, her visionary production will feature a cast headed by Wendell Pierce, (The Wire), and Sharon D Clarke, currently bringing audiences to their feet in Caroline, Or Change. Pierce is making his UK stage debut as Willy Loman, and this should be a solid gold 2019 highlight. (Young Vic 1st May- 29 June.)

BOOK TICKETS TO DEATH OF A SALESMAN

And what of Miller’s classic play about witch hunts and persecution, which I always feel is being staged somewhere in the world at any time.  And what new can be found in this oft staged play? Well, The Yard Theatre in Hackney Wick is staging a female led version of the play, with a woman playing the lead of John Proctor.  It not only counter acts the imbalance of white male playwrights and male heavy cast lists, new light will undoubtedly be thrown onto the text. It is a risky challenge, and one that should be well worth checking out. The Yard Theatre, 27th March- 11th May.

BOOK TICKETS TO THE CRUCIBLE

Of course, this is just one playwright, and the team will be doing our best to cover as much as we can, including new voices and talent, as diverse as possible!