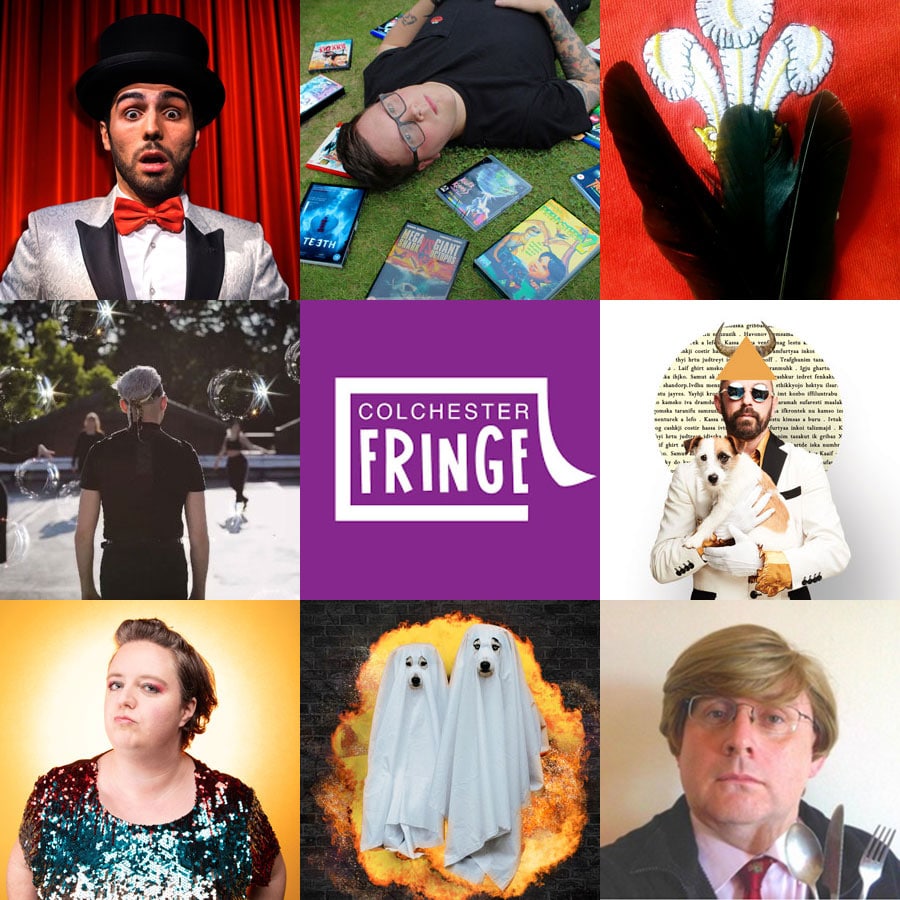 Twice delayed by Covid, the first Colchester Fringe Festival kicks off from October 21st-24th, with a rich array of theatre, dance, performance art, music and comedy!

The four-day festival takes place in multiple venues such as theatres, pubs, bars, and shops all within walking distance of each other in the town centre. The programme features theatre, comedy, drag, dance, and family-friendly performances. There will be 23 shows in total performing up to 3 times each over the four days. Venues include The Headgate Theatre, The Bull Soundhouse, Culver Square, Lion Walk, Coda, and Best Days Vintage. All venues are fully accessible, and all tickets cost just £7, so you can take a risk and see brand-new work without hitting your wallet!

I will admit straight away, I have a new show, and The Miner’s Crow is actually my story! “Once upon a time there was a boy who grew…and grew… and just didn’t stop growing! As if being born in a rain-drenched Welsh village wasn’t enough, Paul has to negotiate his way through childhood trauma, an abusive father, burgeoning creativity, and a confusing sexual awakening! There’s a crow on his shoulder that digs its claws deep, but music offers a way through each crisis. Can The Greatest Single in the History of the World EVER save him? And it might just might save you too!” (Headgate Theatre October 21/23/24)

Other LGBTQ+ highlights include one of Colchester’s leading drag performers Shar Cooterie who will be running her own Drag Bingo night at The Headgate Theatre as well as presenting her won show, Nice To Meat You, and I’m intrigued by Let’s Try Gay, in which two straight friends shoot a gay adult movie as an art project. Or if drunken knife throwing, mind-blowing mind-reading and life-threatening tricks is your thing then you will love the show Friendzy brought to you by comedy magicians The Underdogs at The Bull (Soundhouse). There are also lots of options for the whole family including turbo-charged, chaotic award-winning comedy magic by SESKA or Chasing Fairytales: Japan who tell their unique stories through masks and puppets. Ghost Therapy is an hilarious show in which Dr. Soul has to counsel several unsuccessful ghosts that are failing to spook the humans! Jose Pedro Fortuna presents magic theatre in Entrée, a silent physical theatre adventure!

Lost Dolls is a new piece created by the Headgate Youth Company, and there is Dance represented by Ink’d, a forty-minute show of the exploration of a relationship between a Cis-Male and a Trans-Female, and Back To The Roaring Twenties is a theatrical movement time warp. Radio Vision presents two audio plays, performed live, with Jumbo and Number One The North Sea.

If you love comedy, the Fringe has an array of treats for you! At  The Bull Soundhouse, so not miss Ian Crawford’s Accident Avoidance Training for Cutlery Users, and if you like movies, Luke Poulton’s Bad Movies will be the show for you- the emphasis being on BAD movies and I’m really looking forward to Everything I know I learned From Eurovision by local comedian Jo Fletcher-Cross.

There is more, and there is something for everyone. Brought to life by two local arts producers, Cameron Abbott-Betts and Steve Goatman, Cameron said, “I am so excited to be showcasing such talent in my hometown. We have managed to attract top acts from all over the U.K and even as far as Italy and Portugal. We are hoping to create a real festive, fun atmosphere within that town over the four days and we believe that there is something for everyone within our programme”.

To browse the full programme and to book, go to the Colchester Fringe Festival Website