Rhys Jennings on bringing new musical The Wicker Husband to the stage. Currently running at the Watermill Theatre, Newbury until 26 March staging this new British musical was not without its challenges. 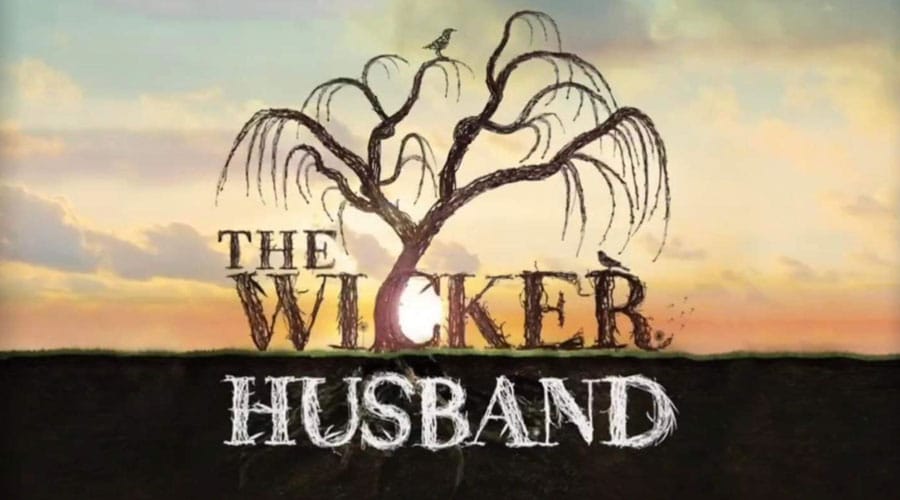 ONCE UPON A WITHY
“Dear Ursula,” said my email. “I recently stumbled across your short story, The Wicker Husband, and I had this wonderful feeling…like walking into an unmarked room and finding just what you’re looking for.”

This was September 2011, but I still remember that raw thrill of discovery. Here was a story which felt both ancient and fresh, epic and intimate. For such a short piece, it spoke volumes about how we treat one another. I knew, somehow, I had to bring The Wicker Husband to the stage.

Luckily, Ursula’s reply was emphatic: “It’s an idea. Use it, abuse it, beat it up, see what comes out of it.”

Eleven years on and here we are at one of the country’s most prestigious musical theatre venues gearing up to remount this beautiful show. What a family we’ve built, and what an adventure it’s been…

OUR WICKER MAN
Like all good ideas, this one swam about the shallows awhile. Every now and then I’d sketch a scene or flesh out a backstory, but the truth was I didn’t know where to begin.

This was a big fish. I needed help to reel it in.

I shared the The Wicker Husband with Charlotte Westenra, a director I’d long admired. Her response: “I’d be much more interested in working on that than some crusty old Greek nonsense. But don’t you think it should be a musical?”

A musical? Interesting. But how?

The Wicker Husband spent two more years gathering dust but no momentum, until one day I was touring in a quirky children’s show with a devilishly witty score by some bloke called Darren Clark. Over a few-too-many pints at The Rusty Bicycle in Oxford, Darren and I unearthed a mutual love of folk tales. I teased him with one in particular – something I quite fancied adapting but couldn’t fathom how. “It needs music though, don’t you think?”

A few weeks later, a message: “Yo dude, haven’t been able to help myself. Been writing songs for this already.” Would I fancy a listen?

November 2013. Hunched over a battered guitar in his dingy little studio in Waterloo, Darren began to strum. He played and talked me through a handful of songs – sketches really, half-formed things – but rich with joy and love, wit and humour. He hadn’t just been inspired – he’d dived heart-first into the belly of the whale.

Don’t get me wrong, I still hadn’t the foggiest idea what I was doing! But that didn’t matter anymore. Because in Charlie and Darren I’d found my allies, and they were both as excited and delighted by this story as I was.

SWAMP
Charlie persuaded The Unicorn Theatre to lend us a studio for one week. Sometimes that’s all it takes to get the ball rolling, just a little space and time. Our aim was to explore the world of the story, to uncover its language and discover for whom it should be told.

We put in an Arts Council application to fund the hiring of actors and materials. It was unsuccessful.

Determined to make the most of the free space we’d been generously given, we put out a call amongst our collaborators and friends: could anyone spare us a week, a day, an hour of their time? Over forty creatives of all disciplines – actors, musicians, singers, dancers, puppeteers – dropped in throughout the course of that week, and what emerged from it felt both organic and collaborative.

We knew puppetry was part of its vocabulary, and thanks to the Little Angel’s Incubate Scheme we were able to explore some early puppetry ideas. We got down to the finals for the KSF Artists of Choice Award, ran an enthusiastically received crowdfund and had our fair share of rejection along the way: “too big”, “too expensive”. The usual.

Without the infrastructure to support new musicals available to us, we struggled finding resources (time, space, money) to undertake the dramaturgical work it needed. To our rescue came offers from some of the country’s leading drama schools to workshop material with their students. The Royal Welsh College of Music and Drama, Guildhall and Trinity Laban each stepped up to the plate, for which we are ever grateful.

Then, in 2016, we applied for – and won – the inaugural Stiles and Drewe Mentorship Award.

THE HEART OF THE WEAVE
On stage at the Novello Theatre, shaking hands with our new mentors George Stiles and Anthony Drewe, we knew this was a turning point. But none of us could’ve predicted how transformational that win would prove. (To think we almost missed the application deadline by minutes!)

Our mentorship year began with a writing retreat in France with George and Ants on hand.

“Don’t you think there’s a song missing here, chaps”, George would say, and a few hours later Darren would serenade us on the sun-kissed patio with the first draft of something or other. Each day held a little discovery, a carefully reassembled plot point or an exciting new number.

The mentorship prize included two ‘labs’ offering us an opportunity to work with a professional cast. The feedback from the audience and the industry panel at both labs was unquestionably constructive, and the lessons we learnt working alongside actors of that calibre proved invaluable.

This chapter of our journey culminated in a showcase performance at The Other Palace.

The anticipation leading to that day was unlike anything we’d experienced before, and the satisfaction of performing The Wicker Husband to a packed theatre for the first time was quite something!

AUTUMN HEADS FOR WINTER
The showcase was well-attended and greatly received. In the aftermath, a flurry of excitement surrounded The Wicker Husband and we met several producers keen to mount a full production.

But Darren, Charlie and myself were united in our stubbornness. By this stage, we’d come to accept our duty of care to this story, this child of ours. It had the potential to be something truly breathtaking and, for us, it was all or nothing. Trimming down the cast, reducing the band, circumventing the puppetry – these simply weren’t compromises we were willing to make. We were still unknown writers with an unknown story so the audacity must’ve been unnerving, but we made it clear that any producer who wanted The Wicker Husband would need to be incredibly brave.

After the thrill of the previous year it felt as though we’d reached an impasse. Many a gloomy evening was spent feeling sorry for ourselves, sighing into our empty pint glasses and wondering why new British musicals were such a risky pursuit.

Meanwhile, on a whim, we entered The Wicker Husband into a musical theatre festival in the US. As a British writing team we knew we only had a slim chance of getting through, but we figured it was worth a shot.

When I got the call from New York offering us one of the eight coveted slots at the festival I did the first cartwheel of my adult life.

SUCH A SIGHT WERE NEVER SEEN
The National Alliance for Musical Theatre is a not-for-profit organisation devoted to the nurturing and furthering of musical theatre. Their annual Festival of New Musicals attracts investors, producers and artistic directors from all over the world.

Each writing team prepare a 45 minute excerpt to be presented twice over the course of two days. We were blessed with an exceptionally talented cast who rehearsed around busy Broadway schedules. To see how enthusiastically both actors and audiences responded to our material was a delight. Despite its uniquely British flavour, it demonstrated just how universal the story of The Wicker Husband could be.

Our experience at NAMT also shone a light on just how cautious, London-centric and overly reliant on well-established writing teams we are in the UK.

We don’t trust new stories and we certainly don’t trust audiences to come with us down untrodden paths. We were amazed to hear of the countless awards, bursaries, writing retreats and investment opportunities available – each dedicated to nurturing innovative new ideas and fresh writing talent. They take the business of new musicals very seriously out there; it’s part of the cultural DNA. We could learn a thing or two from that attitude.

The reception to our festival presentation, and the myriad connections we made in its aftermath, was eye-opening. But amongst all the producers and theatre companies in attendance from across North America and beyond, there was one festival attendee who excited us more than any other: Paul Hart.

I’LL SUPPLY THE WITHY
The Artistic Director of The Watermill had been on our radar for years. He was on the panel for both labs during our mentorship, and since then we’d all flirted with the idea of a production, Paul included. To bring The Wicker Husband to life in such a bucolic setting, with its willow trees and winding river; how wonderfully meta.

But despite being a perfect fit, The Wicker Husband was also a big and demanding show; it would require plenty of careful, strategic planning. To be honest, we’d almost put the idea to bed.

So when Paul flew to New York to attend our NAMT presentation it felt like that moment in a Richard Curtis movie when the romantic lead arrives at the airport just in the nick of time. We don’t know exactly what strings Paul had to pull – which magic spells he cast – but somehow, miraculously, it all fell into place.

March 2020. The last day of rehearsals. I’d spent my days slipping in and out of various rooms at The Watermill for weeks – offering up rewrites, sneaking in to watch puppets come alive, passing actors in corridors running lines, peeking through windows while dances are staged. A beautiful machine. Theatre at its finest.

March 16th, 7:30pm. “Folks, thank you all for coming”. Paul Hart stands on Anna Kelsey’s beautiful set in front of our Press Night audience. He tells us the Prime Minister has just made an announcement – though this audience needs no informing; phones have been buzzing and beeping all evening. It is the government’s “very strong advice” that all theatres must close. The Watermill invites us all to please stay and enjoy this one last performance.

And so it was. Blissfully unaware of how long this might last, or when it all might blow over, the cast and crew of The Wicker Husband took to the stage.

But oftentimes we don’t know the way at all. We stumble blindly through the mud, hoping there’s something just beyond those trees. Just behind that door.

Weaving The Wicker Husband has felt, at times, a little like that. There’s been no pretty little footpath to follow, just a series of brave leaps and wrong turns and kindly helpers.

When the show suffered that mighty blow in 2020 I figured that was it. That was our one chance. The loss was… profound. I sat beneath an actual willow tree, just a few strides away from the theatre, and wept. To lose a child is a terrible thing.

But it takes a village to raise a child, and when I finally looked up from my grief, I found The Watermill, Charlie, Darren, our mentors, friends and companions, our village, all resolved to tell the tale. It hasn’t been easy, but here we are to tell it.

And here you are to hear.

FIND OUT MORE ABOUT THE WICKER HUSBAND HERE