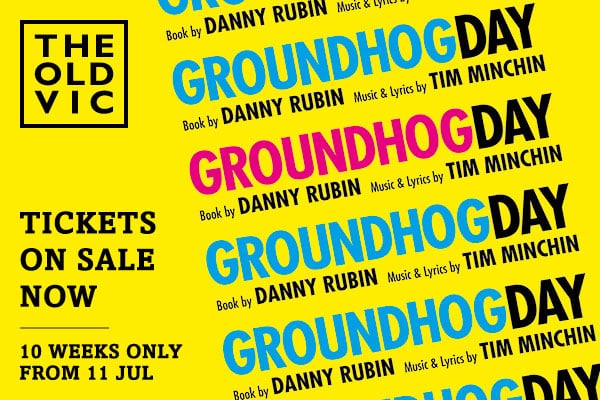 Following the international success of his first musical Matilda, Tim Minchin is back with his new musical Groundhog Day.

BritishTheatre.com and Encore Tickets are pleased to announce an exclusive pre-sale booking period for Groundhog Day at The Old Vic where it will be presented from 11 July – 17 September 2016.

Tim has teamed up with Danny Rubin to collaborate on this new musical based on the 1993 hit film. Andy Karl’s numerous Broadway credits include On the Twentieth Century, Rocky, The Mystery of Edwin Drood, Jersey Boys, Wicked, 9 to 5, Legally Blonde, The Wedding Singer and Saturday Night Fever.

Join us this summer for the world premiere of Groundhog Day a new musical directed by Old Vic Artistic Director Matthew Warchus. Groundhog Day is the story of Phil Connors (Andy Karl), a cynical Pittsburgh TV weatherman who is sent to cover the annual Groundhog Day event in the isolated small town of Punxsutawney, Pennsylvania, when he finds himself caught in a time loop, forced to repeat the same day again and again…and again. As each day plays out exactly the same as before Phil becomes increasingly despondent, but is there a lesson to be learnt through his experiences, will he ever unlock the secret and break the cycle?

BOOK NOW FOR GROUNDHOG DAY AT THE OLD VIC