Craig Christie’s musical Eurobeat – The Pride of Europe is to streamed online at the end of April in a new online version. 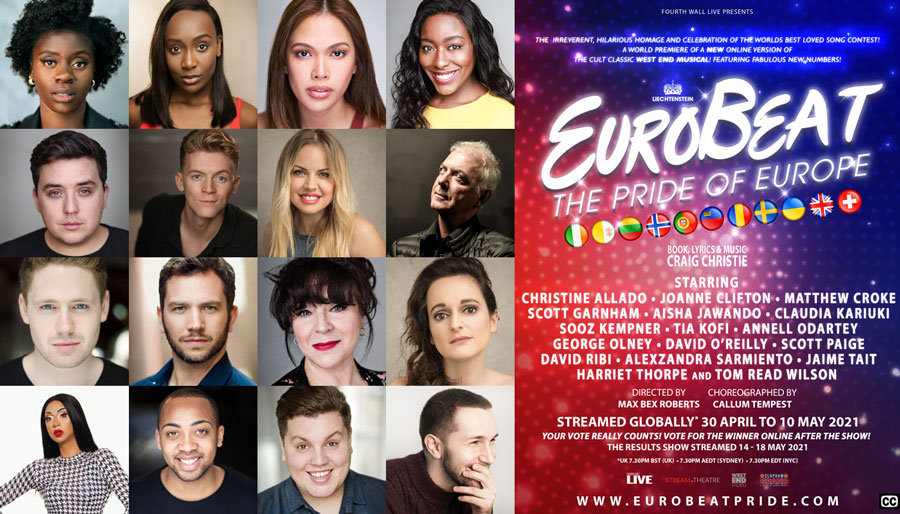 Fourth Wall Live are to present the world premiere of a new online version of the cult West End Musical Eurobeat – The Pride of Europe from late April 2021. Tickets are on sale now.

This irreverent, hilarious homage and celebration of the world’s best-loved song contest will be filmed at The Clapham Grand and streamed globally from 30 April – 10 May 2021 on Stream.Theatre. Viewers will be asked to vote online after watching the show (Your vote really counts!) and The Results Show will be streamed from 14 – 18 May 2021.

Now featuring additional new songs and material Eurobeat – The Pride of Europe has been delighting audiences since its 2008 West End run, this is the latest iteration to join the Eurobeat canon, which (much like its real-life counterpart) is continuously evolving, adapting and reflecting current times. After Moldova and Bosnia & Herzegovina, it is now Liechtenstein’s turn to crown this year’s Eurobeat champion. Take a trip to this tiny Alpine nation for some hilarious new songs, and some old favourites.

This loving send-up is bound to delight any fan of Europe’s largest television event! A live stream of power ballads galore, outrageous dance routines, key-changes, drag queens, a sprinkle of politics and the drama of crowning a winner! Eurobeat: The Pride of Europe is a celebration of an ever more diverse continent that sure loves to party. A song contest that reflects quirky, colourful and camp Europe, where even the smallest can come out and make it big!

Eurobeat – The Pride of Europe has a book, music and lyrics by Craig Christie, is directed by Max Bex Roberts, choreographed by Callum Tempest and the musical supervisor is Adrian Kirk.