Emilia Clarke is to make her West End debut in Anya Reiss’ adaptation of Chekhov’s The Seagull directed by Jamie Lloyd at the Playhouse Theatre. 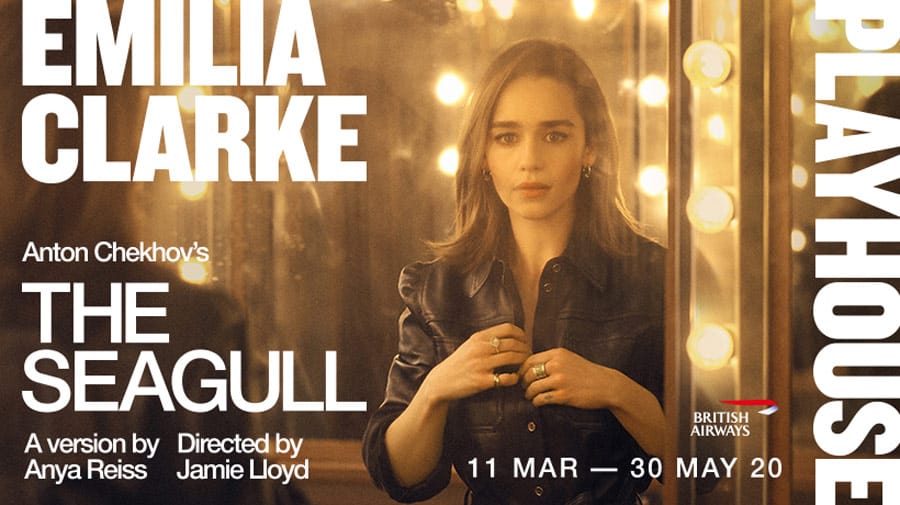 The season, directed by Jamie Lloyd, opened this month with the critically acclaimed production of Edmond Rostand’s Cyrano de Bergerac, freely adapted by Martin Crimp and starring James McAvoy – running until 29 February 2020; and closes with Henrik Ibsen’s A Doll’s House, in a version by Frank McGuinness with Jessica Chastain which opens on 18 June, with previews from 10 June and runs until 5 September 2020.

Emilia Clarke said today, “I am over the moon to be playing Nina in Jamie Lloyd’s interpretation of The Seagull. I’ve long been a fan of the singular vision he brings to each of his masterful productions and the way he approaches classical texts. We are so lucky to be working with Anya’s brilliant adaptation, as she brings a light touch of modernity to this beautifully crafted play. I cannot wait to get stuck in with these two visionaries.”

Anya Reiss added, “It’s a cliché, but the classics really do age and change with you, so I’m thrilled to get another chance to work on The Seagull. I’m even more excited to work with Jamie and Emilia.”

‘We need the theatre, couldn’t do without it. Could we?’

A young woman is desperate for fame and a way out. A young man is pining after the woman of his dreams. A successful writer longs for a sense of achievement. An actress wants to fight the changing of the times. In an isolated home in the countryside where dreams are in tatters, hopes dashed, hearts broken and there is nowhere left to turn, the only option is to turn on each other.

BOOK TICKETS FOR THE SEAGULL