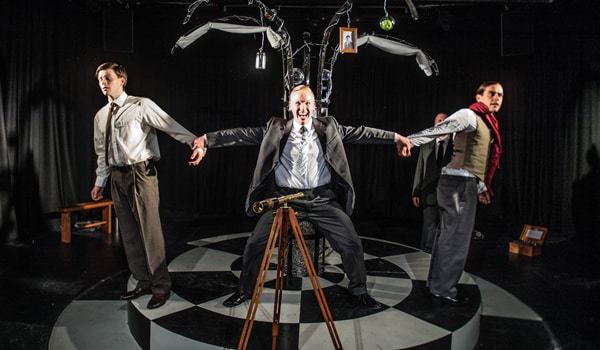 Transferring to the King’s Head Theatre following successful runs in Wales and at the Edinburgh Fringe Festival 2015 is Scriptography Productions’ To Kill a Machine.

Catrin Fflur Hews’ play tells the story of war-time cryptanalyst Alan Turing through the lens of a gameshow. It examines his pioneering work considering whether a machine could think, asking the questions “what is the difference between a human and a machine?” and “If a human is prevented from thinking, do they then become a machine?”

At the heart of the play is a powerful love story and the importance of freedom, in relation to Turing’s own life, death and posthumous re-evaluation. It is the story of Turing the genius, Turing the victim and Turing the constant in a tumultuous world.

Created in 2012, Scriptography Productions looks to support and develop writers, find new platforms for text based work to be produced and encourage cross disciplinary collaborations.

The cast includes Gwydion Rhys, Francois Pandolfo, Rick Yale and Robert Harper. It is directed by Angharad Lee and produced by Sandra Bendelow for Scriptography Productions.

After an exciting and innovative 45th year, the King’s Head continues its new artistic policy of being a crucible of new writing and critical rediscoveries, whilst also welcoming the much-anticipated return of pub opera, with the aim of being the best pub theatre in London.