The Edinburgh Fringe Festival brings together LGBTQ artists and writers from around the world, and here Paul T. Davies picks out those plays that have caught his Queer Eye. 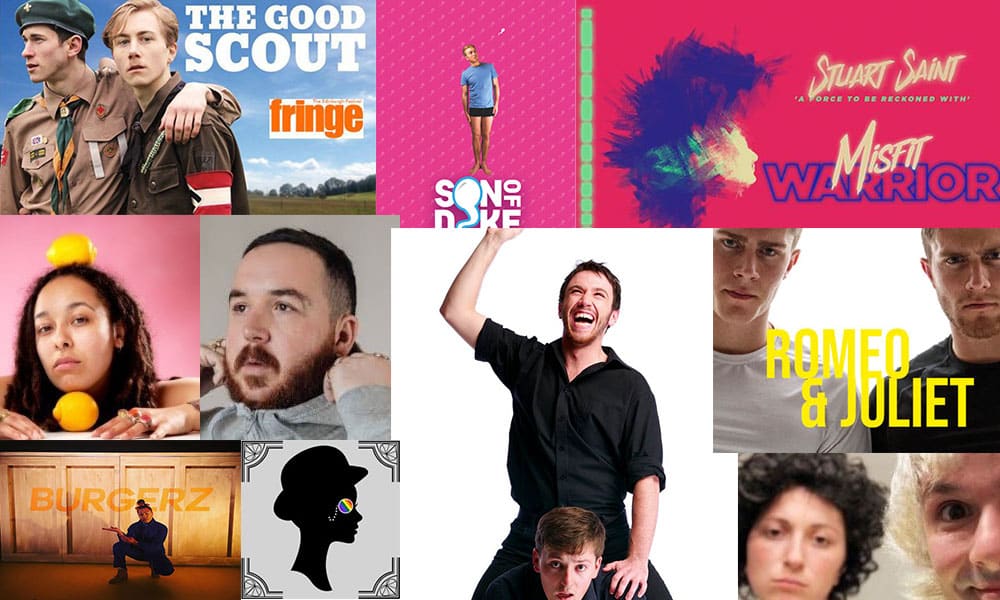 It’s daunting knowing where to start when deciding what to see at Edinburgh, but if you are LGBTQ+, there is wealth of entertainment and lots of opportunities to see Queer lives on stage. I find it’s always good to start looking at venues, and The Space venues are becoming a major host of the genre.  At The Space on the Mile Outcast Theatre from Australia present a double bill from playwright Stephen Dawson, whose play The Importance of Being Earnest with Three F*cking Queers and a Duck was an irreverent hit last year! This year they bring back their 2008 “filthy” comedy Adventures of Butt Boy and Tigger, and Greek Drama gets the Outcast treatment with Bitch, Antigone. They play back to back, so you don’t even have to leave the venue!  Still on the Mile, Love/Sick is about the kind of love you still don’t usually find in Fairy tales, and Dark Play or Stories For Boys explores that notion further. In week three Section 28: The Legacy of a Homophobic Law promises to tackle that history face on with its September 1988 setting

Just up the road Space@Surgeons Hall is The Good Scout, this year’s production from writer and director Glenn Chandler, a contrast to his hit last year, Kid’s Play, this one features British Boy Scouts and members of the Hitler Youth in England in the 1940s as war looms.  Le Monocle, is the true life story of Francine as she discovers the eponymous lesbian bar and her story is interwoven with that of Violette Morris, an acclaimed athlete-turned-Nazi SS agent, and the LGBTQ+ community of 20th-century Paris. The Mannequin takes us on a journey from the streets of Soho and drag bars, and Marrow takes us into the mind of a physically traumatised dancer and condemns violence against LGBTQ people. You have A Match, staged by Two Girls and a Bottle of Savvy, explores online dating and the friendship between a straight and a gay woman.  . At the Space on North Bridge, highlights include Misfits Warrior, Stuart Saint’s autobiographical account of HIV and cancer and it’s domino effect leaving him as a “survivor in crisis”, and the welcome return of The Orange Works Trans Pennine, which found a lot of love from audiences last year, and quite rightly so, it’s a tender, poignant and funny tale well worth catching.

I’m always concerned that the B in LGBTQ doesn’t get enough space, so I’m really pleased to see more visibility this year.  At the Pleasance Courtyard, Algorithms is billed as a “Bisexual Bridget Jones for the online generation”, a tragic-comic one woman play developed on the Soho Theatre Writer’s Lab and definitely one to catch. I’m intrigued with Bi-Cycle, which promises to be a spin class with a chiselled, flawed instructor, and a spin class with a difference! (Underbelly, George Square). Whilst at the Underbelly, try and catch Son of Dyke, Jordan Waller’s hilarious true story of a cock sure gay man who crumbles after the death of his lesbian mother, a big hit at London’s Vault Festival.

Throughout the Festival, at the Traverse, is Burgerz, created by performance artist Travis Alabanza, after someone made a transphobic slur and threw a burger at them. How burgers are made, how they smell, how they feel on skin create a show about reclaiming an act of violence and carving out your identity.

Assembly Roxy is hosting some excellent plays. Collapsible follows Essie after she loses her job and her girlfriend and she now feels more like a chair than a person- a collapsible chair at that!  The Queer House and High Tide are presenting some intriguing work, especially Pink Lemonade, exploring female masculinity and gender identity with poetry, movement and beats, and Since U Been Gone, the superb looking new piece by Teddy Lamb, featuring an original pop music score. While there catch Scottee: Class, his new work about what it is to be embarrassed and pretending to be posher than you are, and do not miss his classic Fat Blokes, which I loved in London last year: (Assembly George Square Studios.) Read our review of Fat Blokes.

At Zoo Playground, two transgender performers say “Up Yours” to the gender binary and invite us to party in Sound Cistem, also featuring recorded interviews with Trans and non binary people. It’s good that ageism on the gay scene is being explored in Morning Glory at the Planet Bar Stage, and at Summerhall comes the fascinating double bill of Tramboy/ Tramgirl with alternating perspectives of a male/female sex worker, performing on alternating nights. At the Assembly Rooms, Yours Sincerely sounds charming as Will, who has accidentally stolen 300 second class stamps from the Post Office, decides to make them count by writing letters to old friends and ex boyfriends.

Returning hits include Romeo and Juliet by Curious Pheasant, a reworking of Shakespeare’s tale but this time set in the world of rugby, a physical theatre piece with love crossing the team divide, (Assembly Rooms) and Tilda Swinton Answers An Ad On Craigslist, Tom Lenks portrayal of the actress that have earned sell out tours and rave reviews since appearing at the festival last year.

You’re not going to have time to see everything, and I haven’t mentioned every show here- Drag and Cabaret/Musicals will form another preview! Best thing to do is browse the brochure either online or on physical form and just follow your instincts!