Earl Carpenter and Daniel Boys are the latest stars announced for the charity gala performance of Boublil and Schonberg’s The Pirate Queen at the London Coliseum on 23 February.

West End stars Earl Carpenter and Daniel Boys are the final stars to be cast in a star-studded charity gala performance of Boublil And Schönberg’s ‘The Pirate Queen’ at the London Coliseum on Sunday 23 February. They join the previously announced Rachel Tucker (as Grace O’Malley, Irish Chieftain and notorious pirate), Hannah Waddingham (Queen Elizabeth I), Steph Parry, Emma Norman, ‘Britain’s Got Talent’ winner Jai McDowall and Matthew Pagan from Collabro as headliners. This concert production of The Pirate Queen marks its West End debut.

Based on the real-life story of history’s Grace O’Malley – an Irish Chieftain and notorious pirate, ‘The Pirate Queen’ is an adventure chronicling the compelling, inspiring heroine who led an extraordinary life as a rogue, lover and mother in 16th-century Ireland. To protect her people and save her one true love, O’Malley must confront the one woman more powerful than her — her fierce rival, Queen Elizabeth I of England.

From the writers of ‘Les Misérables’ and ‘Miss Saigon’, the show combines classic storytelling and a sweeping score, with the powerful, vibrant traditions of Irish dance and song, to create a modern musical event that is both historical romance and a timeless epic. 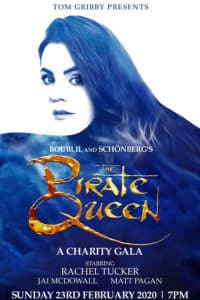 Proceeds are going to Leukaemia UK.

BOOK TICKETS FOR THE PIRATE QUEEN