The Donmar Warehouse London has announced further programming for their 2022 season. 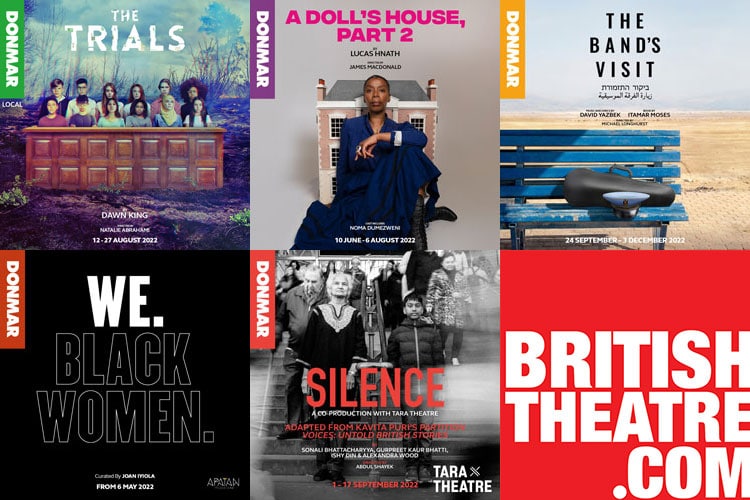 The Donmar Warehouse 2022 season have announced the inclusion of the European premières of Lucas Hnath’s A Doll’s House, Part 2 and David Yazbek and Itamar Moses’ The Band’s Visit, The UK première of Dawn King’s The Trials, A first-time co-production with Tara Theatre with Silence, and A free exhibition – WE. BLACK WOMEN. curated by Donmar Associate Artist Joan Iyiola, running alongside Jackie Sibblies Drury’s Marys Seac.

Michael Longhurst, Donmar Artistic Director commented “I am thrilled to be announcing the European premieres of two major Broadway shows, in brand new productions at the Donmar:  A Doll’s House, Part 2, an audacious sequel from the dazzling mind of Lucas Hnath starring Noma Dumezweni returning to the London stage; and the deeply moving, awards-sweeping musical The Band’s Visit by David Yazbek and Itamar Moses.

In between, the Donmar breaks new ground platforming the next generation of young performers opposite the current generation’s leading actors in Dawn King’s The Trials, a courtroom drama unlike any other; deepening our investigation into the climate crisis and our sustainability practices.  And we are proud to be co-producing with Tara Theatre a vital new commission Silence to mark the 75th anniversary of Partition in India, inspired by extraordinary testimony, acknowledging events that need to be spoken of in Britain.

In a deeply conflicted world, this season celebrates the power of connection to change and heal. Familial, generational, religious, historic – the divisions that sit under these works hold up our need to find and celebrate our shared humanity.

Finally, Donmar Associate artist Joan Iyiola has curated an exhibition WE. BLACK WOMEN., with leading actresses celebrating their unsung heroes, which will run alongside Marys Seacole. It is such a joy to see our theatre full again, with audiences enjoying our recently refurbished spaces. Please do join us for more important stories, thrillingly told.”