Deathdrop the Dragatha Christie murder mystery starring Courtney Act and Monét X Change will return to the Garrick Theatre this May. 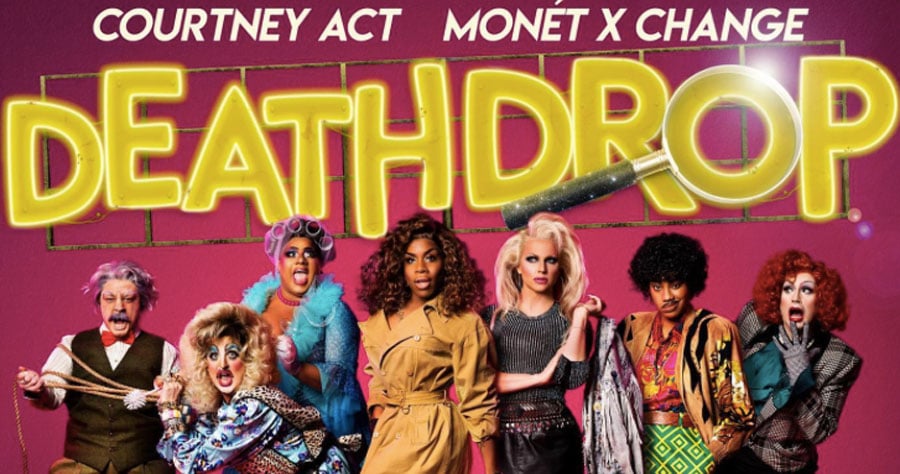 Murder can be such a drag! Deathdrop the new drag murder mystery comes back to the Garrick Theatre London from 19 May 2021 starring Ru Paul’s Drag Race superstars Courtney Act and Monét X Change along with a full drag cast. It will be like nothing you’ve ever seen on a West End stage.

DEATH DROP STOP PRESS (14 March 2021) – With the gradual re-opening of West End Theatres producers have announced that Death Drop will return to the Garrick Theatre London from 19 May – 11 July 2021. Tickets are on sale now!

It’s 1991 and a gaggle of guests gather on Tuck Island for a soirée like no other. The tension rises as the outrageous guests reveal their suspicious and sordid pasts, and one by one they sashay away, until at the last, nerve-shredding, side-splitting moment the surviving guests find out who-dunnit!

This rampant, raucous, ridiculous romp of a murder mystery has gallons of gags, and more twists and turns than a drag queens wig.

In what will be their West End debuts, Celebrity Big Brother winner and current star of ITV’s Celebrity Karaoke Club, Courtney Act, will play the role of 80s pop sensation Shazza, starring alongside Monét X Change appearing as Summer Raines, a glamorous American weather girl living in London, in front of a socially-distanced theatre audience this festive season.

On announcing the show, Courtney Act says: “I can’t wait to get back onto a stage in front of real people this Christmas and I especially can’t wait to make my West End debut in Death Drop! It’s such a hilarious show and it’s just what we all need after months of being locked away. The Garrick Theatre, I’m coming for you!”

Monét X Change added: “Let’s see, you have Monét X Change, Courtney Act, and a full cast of drag stars!? Ms. Thing, Death Drop is an absolutely brilliant show and I am super excited to perform it in London’s fabulous West End!”

Deathdrop is produced by Tuckshop and Trafalgar Theatre Productions.

Read our review of Deathdrop

BOOK TICKETS FOR DEATHDROP AT THE GARRICK THEATRE