The West End sold out dragtastic show Death Drop sashays into the Criterion Theatre, London this March for its third West End season. 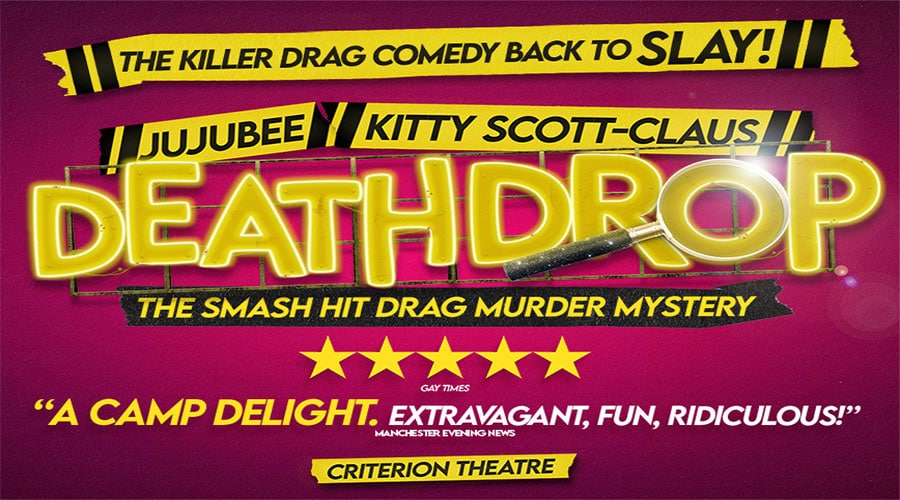 Death Drop, the dragtastic killer comedy sensation sashays into the Criterion Theatre for its third West End season of 7 weeks only from 4 March to 24 April 2022.

It’s 1991 and a gaggle of guests gather on Tuck Island for a soirée like no other. The tension rises as the outrageous guests reveal their suspicious and sordid pasts, and one by one they sashay away, until at the last, nerve-shredding, side-splitting moment the surviving guests find out who-dunnit!

This rampant, raucous, ridiculous romp of a murder mystery serves up all the drama, comedy, twists and turns you’ll ever need!

Death Drop was described as a “killer show” and “rollicking good fun” by The Guardian, this new London residency will feature the talents of RuPaul’s Drag Race legend Jujubee and RuPaul’s Drag Race UK star Kitty Scott-Claus. They will be joined by Holly Stars and a full drag cast for this hilarious murder mystery.

Jujubee, who is about to star in the BBC’s RuPaul’s UK Drag Race vs The World, said : “I am so excited to be joining the cast of Death Drop in London’s West End. I cannot wait to perform alongside these incredible artists”

A dazzling and laugh-out-comedy, Death Drop is written by Holly Stars. It’s a whodunnit like nothing you’ve ever seen before that we all need right now.

“Kitty Scott-Claus, RuPaul’s Drag Race UK Series Three finalist, said: “I am thrilled to be heading back to the West End with the wonderful team at TuckShop! I’ve got some big heels to fill following Courtney and Willam – but luckily I’m a size 10 so I’m used to big shoes.”

Death Drop is presented by TuckShop and Trafalgar Productions.

Read our review of the previous season of Death Drop