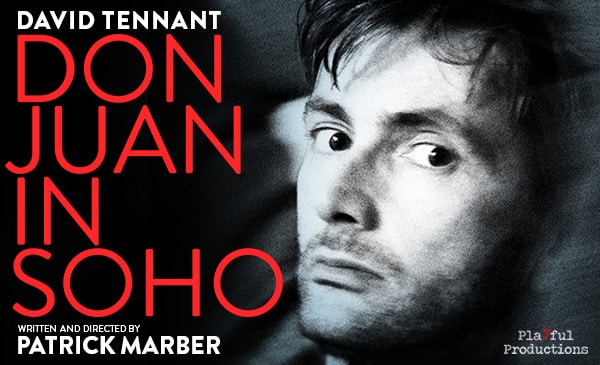 “Please don’t be charmed, he’s not a lovable rogue…” Loosely based on Molière tragicomedy ‘Don Juan’, this savagely funny and filthy modern update transports the action to contemporary London and follows the final adventures of its debauched protagonist – a cruel seducer who lives only for pleasure.

David Tennant is well known to television, theatre and film audiences alike through performances which have won him The Critics’ Circle Award for Best Shakespearean Performance and the National Television Awards’ Outstanding Drama Performance. He is best known for his performances in Doctor Who and ITV’s Broadchurch and for the Royal Shakespeare Company in Richard II and Hamlet. His film credits include Harry Potter and the Goblet Of Fire, Fright Night and Bright Young Things.

Patrick Marber’s plays include Dealer’s Choice, After Miss Julie, Closer, Howard Katz, Three Days in the Country and The Red Lion. His plays have won Evening Standard, Olivier, Time Out, New York and London Critics’ Circle and Writers’ Guild awards. His TV work has received BAFTA, British Comedy and Royal Television Society awards. His screenplays have been nominated for Golden Globe, BAFTA and Academy Awards. He received the British Independent Film Award for Notes on a Scandal.

Marber’s Don Juan in Soho, which premiered to great acclaim ten years ago at the Donmar Warehouse, is now produced in the West End by Matthew Byam Shaw, Nia Janis and Nick Salmon for Playful Productions in association with Sonia Friedman Productions.

BOOK NOW FOR DAVID TENNANT IN DON JUAN IN SOHO