Casting has been announcedx for a brand-new site-specific production of David Hare’s The Permanent Way to be staged at The Vaults beneath Waterloo Station this September. 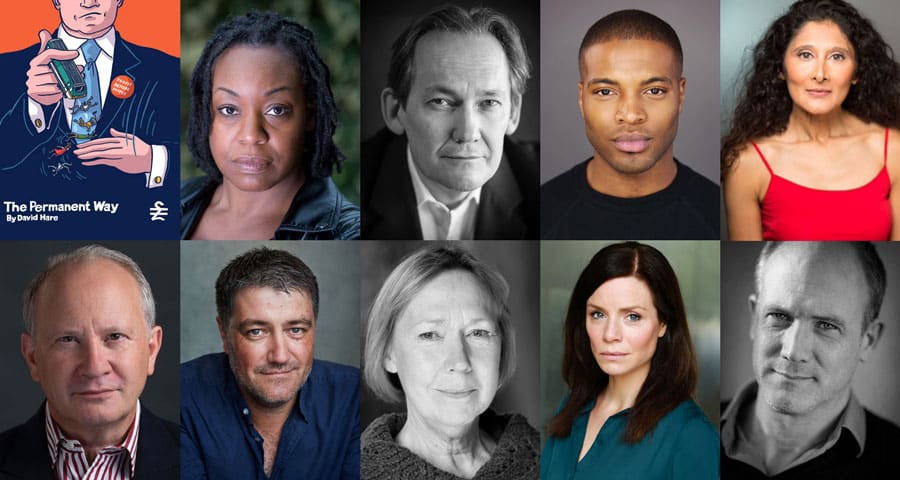 David Hare’s award-winning play roars to life in a provocative new site-specific staging performed in The Vaults, London’s alternative subterranean venue beneath Waterloo Station, running from Friday 13 September – Sunday 17 November, 2019. Casting has been announced for the first major revival of The Permanent Way, which first had an award-winning run in York and then at the National Theatre in 2003.

Revelatory, witty, and moving, The Permanent Way is an astonishing interrogation of the chaos arising from the botched privatisation of Britain’s railways. Told through the first-hand accounts of those involved at every level, from passengers to Civil Service mandarins, this extraordinary verbatim piece asks challenging questions of responsibility and governmental mismanagement. Have we learned anything from recent history?

“As a major new government report into the current state of the nation’s railways is being prepared to be released in the autumn, and with the Rail Review chair Keith Williams comments that the UK railway needs “revolution, not evolution” we feel this play is more timely than ever, commented director Alexander Lass.

David Hare said, “I had hoped my 2003 play would become outdated. But the latest Independent review in 2019 proves the truth of what the play argued over 15 years ago: that the state of the railways is a whacking great distressing metaphor for just how badly the British were governed, and how even more hopelessly badly they’re governed today.”

The cast of The Permanent Way will be as follows:

Anna Acton, best known for roles in EastEnders and The Bill, will play “An Investment Banker/A Second Bereaved Mother”

Jonathan Coote, co-founder of Red Shift Theatre Co, and National Theatre regular, with credits including Home, Emil and the Detectives and As You Like it and West End credits including The Audience will play “A Senior Civil Servant/A British Transport Policeman/Another Senior Operating Executive/Lord Cullen”

Jacqui Dubois, whose recent credit include the national tour of Ghost the Musical, People, Places and Things in the West End, tour and Broadway, Emil and the Detectives at the NT, and Looking for Obama at the Bristol Old Vic, will play “Dawn/A Bereaved Mother”

Lucas Hare, whose National Theatre credits include The Curious Incident of the Dog in the Night-time, Children of the Sun, Scenes from an Execution, The Last of the Haussmans, Season’s Greetings and whose screen credits include The Crown, Broadchurch and Die Another Day, will play “A High Powered Treasury Thinker/A Managing Director of Railtrack”

Gabrielle Lloyd, whose recent extensive stage credits include Misalliance at the Orange Tree, The Heresy of Love at The Globe and The Lady in the Van at the Theatre Royal Bath, will play “A Campaigning Solicitor/A Bereaved Widow”

Tej Obano, whose recently been seen in The Jumper Factory at the Bristol Old Vic and whose screen credits include EastEnders and film LoveSticks, will play “A Senior Rail Executive/A Young Man in Denim/A Vicar of Hatfield”

Sakuntala Ramanee, whose recent stage credits include East Is East at the Trafalgar Studios, Romeo and Juliet for the RSC and Bring on the Bollywood at the Coventry Belgrade and on tour, will play “Wendy/A Survivor Group Founder”

Jonathan Tafler, whose recent stage credits include The Mousetrap in the West End, The Crucible UK tour and The Mighty Walzer at the Royal Exchange, will play “An Experienced Rail Engineer/A Bereaved Father/A Scottish Literary Editor”.

“Why aren’t people angry? They were robbed. What belonged to them was taken from them by a bunch of bankers and incompetent politicians. What was theirs was given away. What was foredoomed to fail failed. And they weren’t angry.”

The original production of The Permanent Way was based on a series of verbatim interviews by Hare, and then directed by Max Stafford-Clark with Out of Joint. It premiered at the Theatre Royal, York on 13 November 2003 and toured – winning ‘Best Touring Production’ from the Theatrical Management Association. It opened at the National Theatre in January 2004, where it was such a huge critical and box office hit that it transferred from the Cottesloe to the Lyttelton.

The Permanent Way will be directed by Alexander Lass, nominated for Best Director at the 2017 Stage Debut awards for 46 Beacon at Trafalgar Studios 2, and whose other credits include Associate Director on Shakespeare in Love at the Theatre Royal Bath and on tour, and on No Man’s Land in the West End.

The Permanent Way will have Set and Costume by Ruth Hall, lighting design by Rick Fisher, sound design by Roly Witherow, movement direction by Siân Williams, casting by Ellie Collyer-Bristow CDG, and is produced by Debbie Hicks.

BOOK TICKETS FOR THE PERMANENT WAY AT THE VAULTS, LONDON