David Harbour and Bill Pullman are to star in the World Premiere of Theresa Rebeck’s new play Mad House at the Ambassadors Theatre, London. 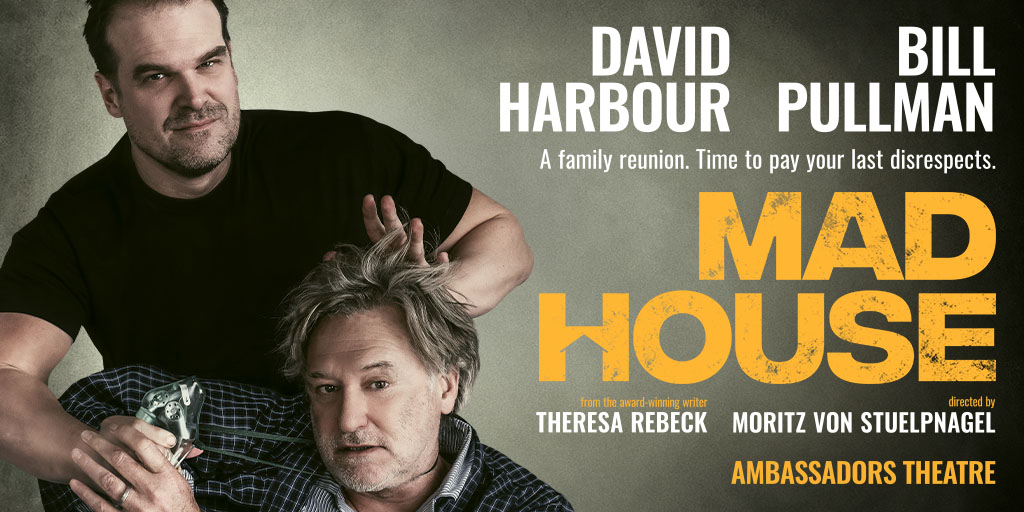 Moritz von Stuelpnagel is to direct David Harbour and Bill Pullman in the world première of Theresa Rebeck’s dark and funny new play Mad House which will play at the Ambassadors Theatre, London from 15 June to 4 September 2022. Mad House tickets are now on sale.

A family reunion. Time to pay your last disrespects.

In rural Pennsylvania, Michael has returned to his childhood home to look after his dying father. His siblings Ned and Pam soon arrive, determined to work out how much money Dad actually has left and how they’re getting their hands on it.

Theresa Rebeck said today, “There are those projects when the stars simply align, and to see David and Bill together on stage is beyond my wildest dreams. I’m very much looking forward to being back in the rehearsal room with Moritz as we bring the play to production here in London.”

David Harbour added, “So excited to return to the London stage with Theresa’s blistering new dark comedy.  It features two of my favourite things: the abyss of madness that lies at the pit of every family as they stare blankly, incomprehensively into the nature of our fleeting existence, and real estate.”

Bill Pullman plays Daniel. Bill recently appeared with Sally Field at The Old Vic in All My Sons, The Other Place, Oleanna, The Goat or Who is Sylvia? (Broadway), and in films including Independence Day, While You Were Sleeping, Resurgence and American Ultra.

BOOK TICKETS FOR MAD HOUSE AT THE AMBASSADORS THEATRE