Curve Leicester’s socially distanced season of Sunset Boulevard in concert has had to cancel live performances and will be streamed online instead. 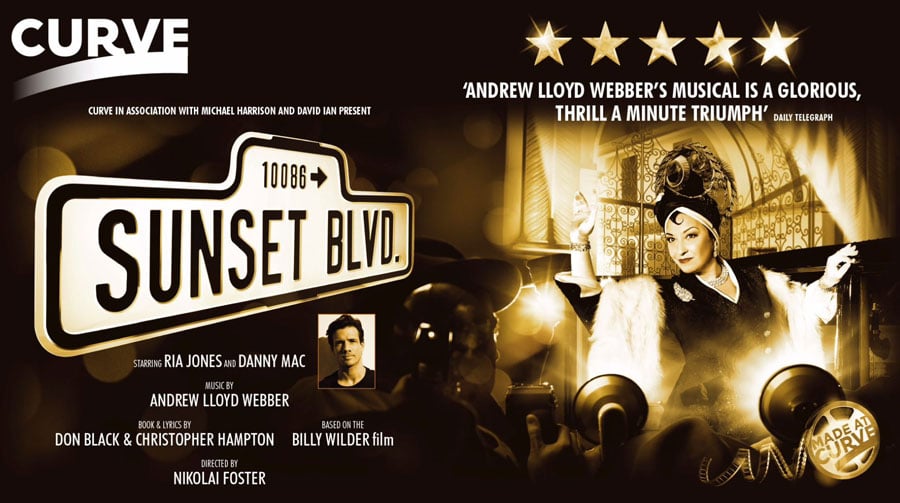 Following the latest lockdown measures in England, Curve’s production of Sunset Boulevard in concert has cancelled live performances and will instead be filmed in HD for streaming between 22nd December 2020 and 9 January 2021.

There will be up to three different performance times daily. The streamed version will be available for audiences in the UK and all territories across the world, with the exception of North America. Tickets are on sale now and can be booked via the theatre’s website or by calling the Box Office.

All current ticket holders will be contacted as soon as possible by Curve’s Box Office team, and will be eligible for either a full refund or an exchange for an ‘at home’ ticket.

Curve’s Chief Executive Chris Stafford and Artistic Director Nikolai Foster said “Due to Leicester entering Tier 3 and the uncertainty of when we will be able to reopen, we have made the difficult decision to cancel public performances of Sunset Boulevard. We are incredibly disappointed not to welcome audiences back to Curve this Christmas, especially as we have invested significantly in measures to ensure we can operate in a Covid-safe way.

However, the show must go on and in a Curve first, we will be bringing back our terrific Sunset Boulevard company to film the production for audiences to watch from the comfort of their own homes. The concert staging will see our stalls cleared of seats to accommodate our socially distanced 16-piece orchestra and we will celebrate every corner of Curve’s astonishing in-the-round auditoria with Andrew Lloyd Webber’s magnificent score. Although we are sorry not to be able to come together in person this Christmas, we are delighted we can share this specially-created concert with audiences across our city and beyond. Our sincere thanks to Really Useful Group, Paramount Pictures, UK Theatre, the Musicians Union, our sponsors PPL and the Culture Recovery Fund for helping make this possible.”

Ria Jones is to play Norma Desmond with Danny Mac as Joe Gillis will reprise their roles in Sunset Boulevard joining a host of original company members from Curve’s award-winning 2017 touring production. Molly Lynch will reprise her role as Betty Schaefer, Adam Pearce returns as Max Von Mayerling, Dougie Carter as Artie Green and Carl Sanderson as Cecil B DeMille.

Set over a turbulent New Year’s Eve in 1940s Hollywood, Sunset Boulevard is a gripping tale of romance, glamour and obsession. Curve’s Artistic Director Nikolai Foster will once again direct this production of Andrew Lloyd Webber’s musical masterpiece, which features book and lyrics by Don Black and Christopher Hampton and is based on the 1950 film by Billy Wilder.