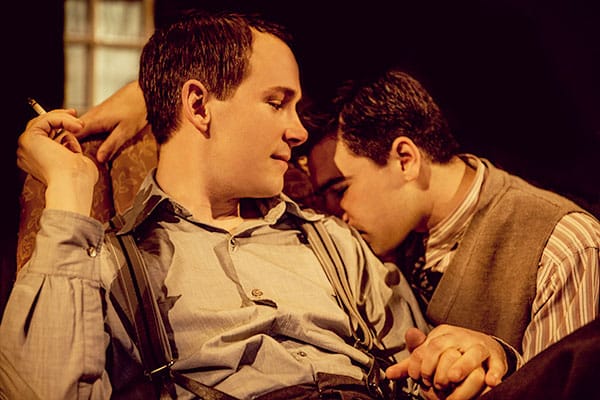 A well structured, naturalistic and beautifully performed play takes my choice as the best new play of 2016. Kenny Morgan was the real life lover of playwright Terence Rattigan, who, after his life spiralled into despair after leaving Rattigan, took his life by gassing himself in front of a gas fire. As a result, Rattigan wrote The Deep Blue Sea, which opens with his heroine, Hester Collier attempting to gas herself. Mike Poulton’s play, in many ways, is the play Rattigan couldn’t have written. Central to the production was Paul Keating’s powerful and moving performance as Kenny Morgan, for me, the male actor of the year. Yet the whole ensemble were terrific, the set perfect and the script shimmered with restrained, tragic dignity. I still hope it will get a West End run.

Emma Rice, one of the best directors in Britain, brought her Kneehigh fun and invention and made Shakespeare’s classic look like a brand new play. Cast colour blind, gender blind, sexuality and age blind, the production was a joy from start to finish. The mechanicals were the Globe font of house staff, (Bottom in charge of Health and Safety), Puck was armed with water pistols, Helena became Helenus and the gay pairing threw new light on the oft-tedious lovers. Ground-breaking and ground shaking, I was deeply moved when the audience of school parties cheered the same sex kiss. Yet the Board had apparently never seen an Emma Rice production before, and they have shoved her out. Catch everything she does at the Globe in her second and final season in 2017, and let the increased box office takings speak for themselves. She will be a tough act to follow.

Originating at the Sherman Theatre in Cardiff and playing at the National during its tour, this was a one woman tour-de-force by Sophie Melville, the best female performance this year. Effie is the kind of young woman you would cross the road to avoid- hardnosed, drunk, loud, aggressive, unemployed, her life changes when she meets a wounded soldier in a club. So far, nothing special. Yet the tragedy that then unfolds becomes an angry rallying cry against NHS cuts and austerity, and playwright Gary Owen makes this woman, in the final moments, a revolutionary. Perfect theatre: intelligent, moving and deeply relevant. This summer, Owen and the Sherman will co-produce Killology at The Royal Court. I have a feeling that will be one not to miss.

Because I cannot separate them, this is either joint third or an additional entry! Late to the party, I saw Duncan McMillan’s masterpiece during its West End run. The story of an addicted actress and her road to recovery, the script and production constantly played with reality and theatre, and contained THAT performance from Denise Gough. She was never off stage, mesmerising, and no one else could have won that Olivier award.  The ensemble matched her and this was an unforgettable night at the theatre.