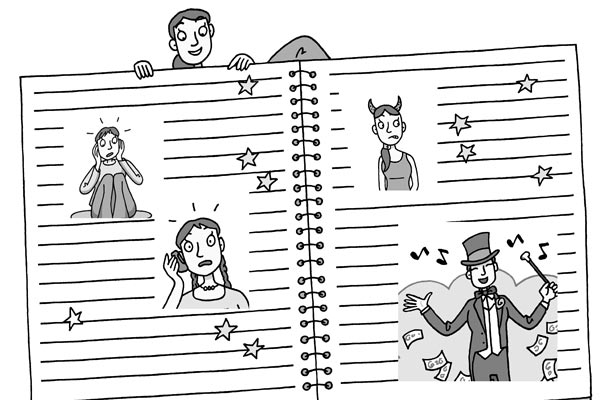 I don’t know why, but I’ve always loathed admitting to strangers that I’m an actress. Probably because, most of the time, I’m not actually acting. I suppose that to admit you’re an actress without that essential acting job, to people who don’t understand the highs and lows of the profession, causes moderate confusion on their part. Not to mention severe embarrassment on mine. Parents’ dinner parties, family weddings, in fact any social event away from the industry, all lend themselves to a wearisome array of questions to do with my seemingly alien profession. I find myself answering the same questions, feigning the same excitement about my chosen path and faking the same wonderment at the glory of acting. And yet, the questions I ask myself are very different from the ones on other people’s minds. They may want to know if I have any famous friends, or if I’ve been in Casualty, but mine usually consist of at least one, or more likely a combination, of the below:

* How on earth did I end up not being in control of my own destiny?

* How did I end up earning a daily wage – yet for most of the time in a different profession from the one I trained for?

* How did I end up doing a hundred different part-time jobs that don’t give me any fulfilment at all?

* When did I make the decision to make my life as difficult as possible?

* When did I decide on the rollercoaster, not the merry-go-round?

* How did I end up sitting here at my desk trying to file away my day into a cabinet bursting with crappy auditions?

* One simple question to sum up all others: How did I end up here?

I’ve always tried to be an achiever. I’ve always tried to reach for the top, strained for that top, and put way too much pressure on myself to get there. But, in the throes of my life at university I never envisaged I would end up in a career rife with struggle, disappointment or frustration. I never did, because you don’t know about it until you arrive, enthusiastically knocking on that door behind which lies all of your ambitions. No-one tells you that the door is not only tough to open but that, once you’ve made it through, the room on the other side is not only overcrowded. It’s literally bursting with fellow competitors.

From this endlessly tiring profession, as I put myself through endless auditions, there are questions and evaluations that never end.

* What did they think?

* Was I good enough?

* Should I have picked a different song?

Out of all of these questions, one stands out:

* Why do I feel like the only way I’m ever going to achieve what I really want in this business, is to sneak in through the fire exit that someone left open by mistake? In other words, why don’t I feel worthy of entering through the big front gates of success?

Who am I?
You may have walked past me at 22, graduating from drama school full of hope and anticipation, excited at the possibilities for my future. At 23, you could have seen me gasping for fresh air as I left Pineapple Dance Studios, wondering why my technique was no better after weeks and weeks of classes. At the ripe old age of 24, you possibly passed me en route to an audition with my portfolio, water and a bag full of nerves.

You may well have spoken to me at 25, if you were booking theatre tickets. I was spending more time at my part-time job than acting, and wondering whether I was ever going to smell the sweet scent of success again. And at 26, if you’d asked me, I could have told you about the never-ending battle between my head and my heart, as I wondered what my next step in this world should be.

I got into acting pretty late. Ballet at three years old, jazz at five, singing lessons at seven, competitions at eight, awards at ten… That was not me.

I was fourteen when I was bitten by the bug, after winning a role in the school production of The Little Matchgirl. I only auditioned because my friend Lucie didn’t want to go alone. I stood up and sang along with the other hopefuls and didn’t think much of it… until my name appeared on the school noticeboard for a recall. Then, I learned that script as if my life depended on it and, when I got a part, truly gave it my all. The morning after the first performance, still on a high from the night before, I floated down the school corridor as Miss Barker emerged from the staffroom. She stopped me and said ‘Congratulations on last night, Jo. You know, you have real stage presence. Well done.’ Compliments indeed. Miss Barker was the Head of Music and one of the most senior, well thought of teachers in the school. My life was never the same. I suddenly wanted to have that feeling with me always. The feeling of acknowledgement, of achievement and of fulfilment.

If only Miss Barker knew the impact that one sentence has had on my life.

I don’t know what I’m doing with my life. I just know I love performing. And I’m good at it. I know I need to be patient, but why isn’t it happening for me?

‘What are you in at the moment?’

Actual answer:
I’m not actually in a contract right now but I’ve got a few irons in the fire. I’m working on a concert and I’m down to the finals for a big job, so fingers crossed. I should know next week.

Honest answer:
Nothing. I haven’t had an audition in weeks. My life is on pause. My career is at a standstill.

PURCHASE A COPY OF CONFESSIONS OF A (STRUGGLING) ACTRESS THROUGH AMAZON.CO.UK