The Tony Award-winning musical Come From Away will receive its West End premiere at the Phoenix Theatre from 30 January 2019.

Come From Away the musical is the remarkable true story of the 7000 stranded passengers that were welcomed by the people of Gander Newfoundland during the wake of 9/11. Cultures clashed, and nerves ran high, but as uneasiness turned into trust music soared into the night and gratitude grew into enduring friendship.

Critically acclaimed Come From Away was a surprise hit on Broadway where it continues its sold-out record-breaking run. Come From Away launches a 60-city North America tour in October an Australian production is confirmed for Summer 2019 and a feature film adaptation is in the works. 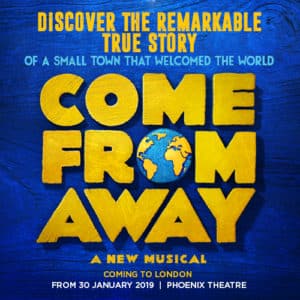 Casting for Come From Away will be announced soon.

Book, music and lyric writers, Irene Sankoff and David Hein, said: “The humour, the music, and the infectious generosity of spirit of the people of Newfoundland inspired us to write this musical, however along the journey we discovered that this isn’t just a Canadian story – it’s a universal story of how, when faced with global atrocities, the world comes together to respond with kindness and cooperation. We are particularly thrilled to be sharing this story with audiences in the UK and Ireland.”

Come From Away features a book, music and lyrics by Irene Sankoff and David Hein and is directed by Christopher Ashley, with musical staging by Kelly Devine, music supervision and arrangements by Ian Eisendrath, scenic design by Beowulf Boritt, costume design by Toni-Leslie James, lighting design by Howell Binkley, sound design by Gareth Owen, orchestrations by August Eriksmoen, and casting by Pippa Ailion CDG and Natalie Gallacher CDG.

COME FROM AWAY TICKETS