Broadway’s Come From Away is a Best Musical winner all across North America and in London’s West End.

Broadway’s COME FROM AWAY is a Best Musical winner all across North America!

This New York Times Critics’ Pick takes you into the heart of the remarkable true story of 7,000 stranded passengers and the small town in Newfoundland that welcomed them. Cultures clashed and nerves ran high, but uneasiness turned into trust, music soared into the night, and gratitude grew into enduring friendships.

Don’t miss this breathtaking new musical written by Tony® nominees Irene Sankoff and David Hein, and helmed by this year’s Tony-winning Best Director, Christopher Ashley. Newsweek cheers, “It takes you to a place you never want to leave!”.

COME FROM AWAY – WHAT THE CRITICS SAID

“Although the residual shock of 9/11 gives it a strong current of emotion, Come from Away’s multiple narratives mostly have low stakes; it’s essentially a show about a bunch of people inconvenienced at once. When it touches on weightier concerns-one passenger is the mother of a missing firefighter-it falters; it is better at celebrating less consequential things, like a rowdy evening of initiation at a local bar, where the visitors are urged to kiss a cod and try a local rum called screech. A band of eight plays the spirited, Celtic-accented score, heavy on fiddle and bodhran and flute. Under Christopher Ashley’s fluid direction, the 12 versatile actors form a true ensemble cast, playing dozens of roles as both the Plane People and the plain people who welcome them to their rock…Despite minor stumbles of craft, Come from Away makes a persuasive case for the value of good intentions. For this kind of uplift you don’t need planes”
Adam Feldman – Time Out New York 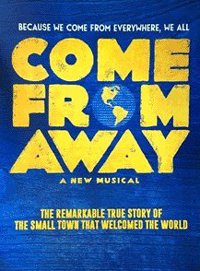