Cirque Du Soleil has announced that their production Kurios will have its European Premiere at the Royal Albert Hall for a limited season from 13 January 2023. 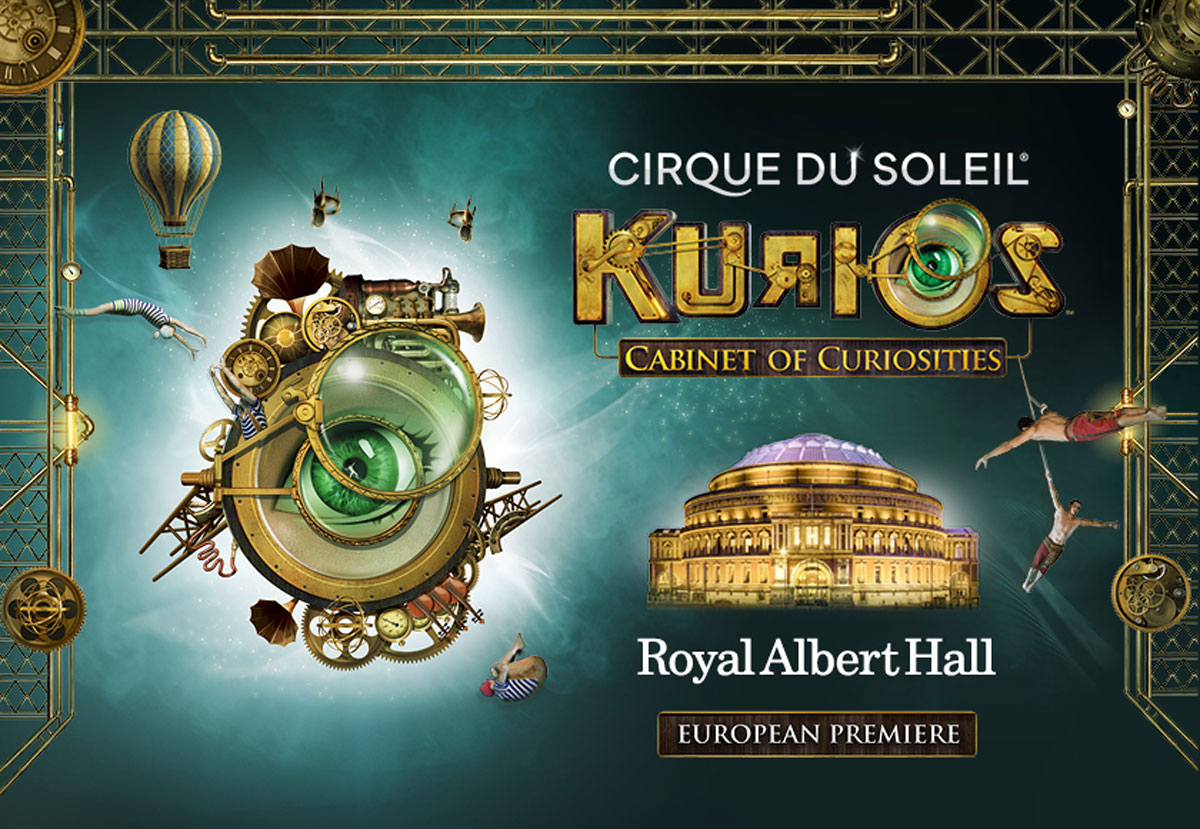 Cirque du Soleil is proud to announce the London run for one of its most critically acclaimed touring show KURIOS — Cabinet of Curiosities. Opening on 13 January, audiences are invited to escape reality and step into a world of extraordinary imagination at the iconic Royal Albert Hall for a limited series of performances. Pre-sale tickets are on sale now.

Taking aesthetic inspiration from the Victorian era and 19th century industrial revolution, KURIOS fittingly arrives in 2023 at the prestigious Royal Albert Hall in London, the venue where the show truly belongs, with the residency coming to the hall during the venues 150th anniversary celebrations. The run of KURIOS marks the 26th year that Cirque du Soleil have performed at the renowned venue, having graced the stage over 1,200 times and having sold almost 3.8 million tickets since 1996.

The only historic venue worldwide to have installed permanent technology to accommodate Cirque du Soleil’s wonderous performances, this year the Royal Albert Hall in collaboration with Cirque du Soleil have installed additional steelwork beneath the stalls to strengthen the venue in specific locations allowing this and all future Cirque du Soleil shows to be bigger and better than ever before. Work began on the steel installation in January 2022 and the nine month long project is is expected to be completed this week. In addition, for the first time the production of KURIOS at the hall will require the floor to be elevated to accommodate the unusual set design, transforming the ground level of the venue to the eyes of the regular visitor. KURIOS at the Royal Albert Hall promises to be a circus event like no other.

“KURIOS was an absolute joy to create. Inspired by one of the most creative and forward-thinking periods in time, the second half of the 19th Century,  we created it with inventiveness in mind as a way to celebrate life and bring people together more, with the intention that the audience would reconnect with the optimism and the feeling that everything IS possible. During the creation period, we were already dreaming of the day when KURIOS would arrive in the iconic setting of the Royal Albert Hall as they are meant for each other. We’re so excited to perform the show’s European Premiere in London! The Royal Albert Hall has always been an incredibly special home for Cirque du Soleil in the UK and we’re proud to be celebrating its 150th anniversary with KURIOS, our Cabinet of Curiosities!” Michel Laprise, Writer and Director of KURIOS

“We are delighted to be welcoming Cirque du Soleil back to its London home, the Royal Albert Hall. This long-running partnership has consistently captivated audiences over the last 26 years and we cannot wait to see the steam-punk themed production they have in store for us with KURIOS. Cirque du Soleil are renowned for creating immersive experiences with their performances, and it is an honour to have them here, marking their European debut of KURIOS in this historic venue.” Craig Hassall, CEO Royal Albert Hall

Critically acclaimed the world over, KURIOS—Cabinet of curiosities astonishingly revisits the signature Cirque du Soleil style of performance by weaving jaw-dropping acrobatics with a refreshing touch of poetry, artistry and humour. Featuring never seen before acts, KURIOS is a mind-boggling escape from reality, unveiling a festive, steampunk-inspired universe where the unexpected lies at every corner.

In an alternate yet familiar past, KURIOS steps inside the mechanical lab of an inventor convinced that there exists a hidden, invisible world—a place where the craziest ideas and the grandest dreams await. Once the inventor succeeds to unlock the door to this world of wonders, time comes to a complete stop and an uplifted cast of otherworldly characters invades his curio cabinet, bringing his makeshift creations to life one by one. As the visible becomes invisible and perspectives transform, KURIOS bursts into a celebration of the power of the imagination.

Premiered in Montreal in 2014, KURIOS has mesmerized over 4.5 million spectators in 30 cities worldwide with over 2,000 performances brought to life by its cast of 49 world-class artists.