Kander and Ebb’s Chicago is the longest-running American musical in Broadway history now playing at the Ambassador Theatre. Give em the old razzle dazzle!

Chicago is an ageless story about ambition and greed, fame and scandal. When star act Velma is put on trial for murdering her cheating husband, Chicago’s number one lawyer Billy Flynn is called in to defend her. But things get a little complicated when aspiring singer Roxie Hart also ends up in jail!

From the Legendary writers John Kander and Fred Ebb (Cabaret, Kiss Of The Spiderwoman, The Visit), Chicago features one of Broadway’s classic scores with songs including Razzle Dazzle, All That Jazz! They Both Reached For The Gun, When You’re Good To Mama, and the Cell Block Tango.

Mondays, Tuesdays, Thursdays, Fridays and Saturdays at 8pm
Saturday and Sunday at 2.30pm
Sundays at 7pm

Running Time: 2 hours and 30 minutes including one interval
May be inappropriate for 12 and under. 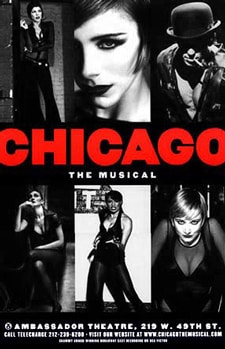