London continued its long affair with one Stephen Sondheim in 2018 with not one but two major productions of two of his earlier musicals Company (which concludes it’s run at the Gielgud Theatre at the end of March) and Follies which is having an encore season at the National Theatre commencing shortly. 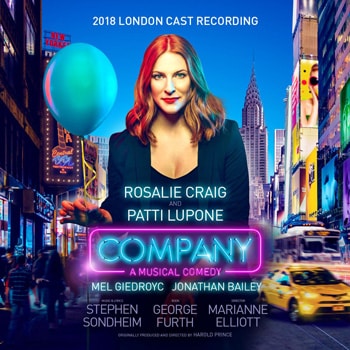 Company was not your run-of-the-mill revival. Under Marianne Elliott’s direction and with the co-operation and involvement of Stephen Sondheim, audiences were presented with a re-imagined production where several roles including the show’s lead had undergone gender reversal. It’s a musical about life, love and marriage and it’s a tribute to the original writers that at its core the show seems as relevant and as fresh as when I first saw it in the 1980s.

Luckily, this new version of the show has been captured by record producer Nigel Wright and Joel Fram for Warner Classics. This recording features all the lyric alterations and new orchestrations by David Cullen. Musically supervised and conducted by Joel Fram’s superb show orchestra Sondheim’s score springs to life and it’s glorious to hear!

Cullen’s new orchestrations ditch the more synth driven electronic elements of previous recordings giving the recording a fresh, modern feeling taking it from being a ’70s period piece to what many pundits have called the “post Sex and the City era”. The recording also features Marry Me A Little as the Act One closer and Sam Davis’s wonderful dance arrangements.

Musical numbers wise this album is a treasure trove of riches. Rosalie Craig delivers knockout renditions of Marry Me A Little, Someone is Waiting and Being Alive. Sorry-Grateful featuring Gavin Spokes, Richard Henders and Ben Lewis strikes just the right tone, whilst George Blagden’s Another Hundred People offers a new take on a song that to me had become a victim of its own success.

I’m glad to report that my two favourite numbers from the show are still as stunning here. Patti LuPone’s The Ladies Who Lunch is a masterclass in musical theatre perfection, whilst Jonathan Bailey, Alex Gaumond and Daisy Maywood make the mayhem of Getting Married Today explode off the recording.

The cast album also features Curtain Call and Exit Music which make it as close to reliving the live theatre experience as you can get.

Sondheim’s open-minded attitude to his work allowed Elliott to deliver this standout production last year. Word has it that it’s Broadway Bound and rightly so. With a sterling CD to act as its calling-card pre-arrival, it should be welcomed with open arms. For those like me buying the CD to remember this remarkable production of a remarkable musical, it should keep the flame burning bright for not only musical theatre fans but for a new generation of fans.