Casting has been announced for the UK premiere of On Your Feet – The Story of Emilio and Gloria Estefan which is to play a limited season at the London Coliseum from 14 June 2019. 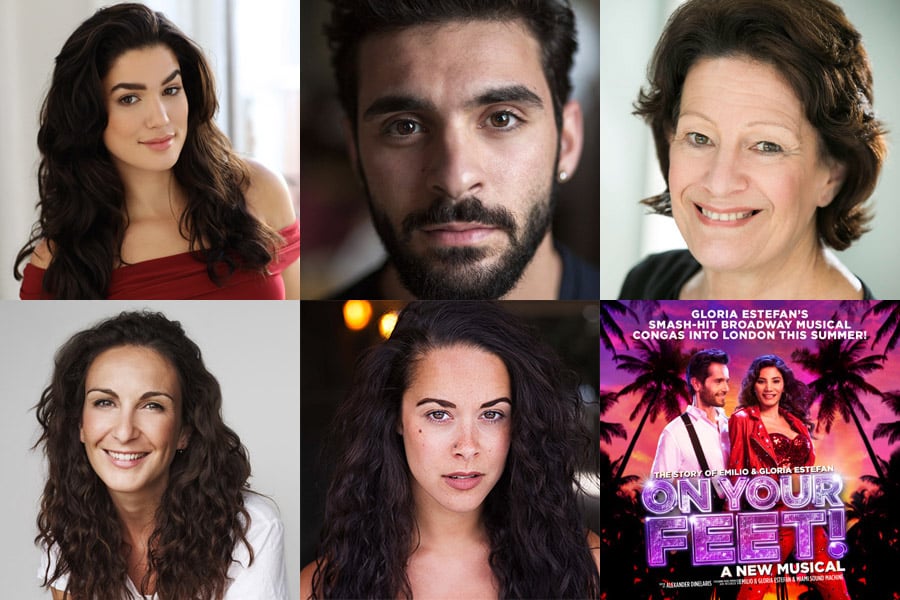 On Your Feet! is the inspiring true love story of Emilio and Gloria and charts their journey from its origins in Cuba, onto the streets of Miami and finally to international superstardom and features some of the most iconic pops songs of the era, including ‘Rhythm is Gonna Get You’, ‘Conga’, ‘Get On Your Feet’, ‘Don’t Want To Lose You’ and ‘1-2-3’.

Gloria Estefan has sold over 100 million records worldwide and is the most successful Latin crossover performer in the history of pop music.  In addition to her 38 number 1 hits across the Billboard charts, Gloria recorded the Oscar-nominated song ‘Music of My Heart’ and has received numerous honours and awards over the course of her illustrious career. Emilio Estefan is a founding member of the pioneering Miami Sound Machine, who created a brand new Latin crossover sound – fusing infectious Cuban rhythms with American pop and disco. Combined, they have won a staggering 26 Grammy awards.

Christie Prades played the role of ‘Gloria Estefan’ in “On Your Feet!” on Broadway and can currently be seen in the same role on the US tour of the show. Christie’s other credits include ‘Vanessa’ in “In the Heights”and “West Side Story”.

George Ioannides has appeared in the West End productions of “Annie” and “Mamma Mia!” and was most recently seen as ‘Eduardo Cortez’ in “An Officer and a Gentleman” at Curve, Leicester and on national tour.

Philippa Stefani played ‘Mimi’ in the recent national tour of “Rent”. She has also played ‘Daniela’ in “In The Heights” at King’s Cross Theatre. Her other theatre credits include the original London casts of “Wicked” at the Apollo Victoria and “I Can’t Sing” and “Sister Act”, both at the London Palladium. She has also appeared in “High Society at the Old Vic and ”Ghost” at the Piccadilly Theatre.

Madalena Alberto’s West End credits include the title role in “Evita” at the Dominion Theatre and ‘Grizabella’ in “Cats” at the London Palladium. She has also appeared as ‘Fantine’ in the 25th Anniversary tour of “Les Miserables” and was most recently seen as ‘Giulietta’ in “Aspects of Love” at the Southwark Playhouse.

Karen Mann’s many credits include ‘Golde’ in the national tour of “Fiddler on the Roof” opposite Paul Michael Glaser, ‘Marley’ in “Scrooge” at Curve and ‘Mother Superior’ in “Sister Act” also at Curve and on national tour. Her extensive work at the Watermill Theatre in Newbury includes ‘Gladys’ in “Copacabana”, ‘Viv’ in “Spend Spend Spend” and ‘Mrs Lovett in “Sweeney Todd”, which transferred to both the New Ambassadors Theatre and Trafalgar Studios.

The Tony Award® nominated show ran on Broadway for two years, playing for over 750 performances. It is currently on a two year US tour, whilst the production in Holland played to sell out business and standing ovations for a season in 2017/18.

On Your Feet plays at the London Coliseum from 14 June to 31 August 2019. Prior to the London run there will be seven performances at Curve Leicester from 3 – 8 June 2019.

BOOK TICKETS FOR ON YOUR FEET

Otherwise, please click here to continue to the Curve Leicester  >>>

Please click here to continue to the Curve Leicester  >>>