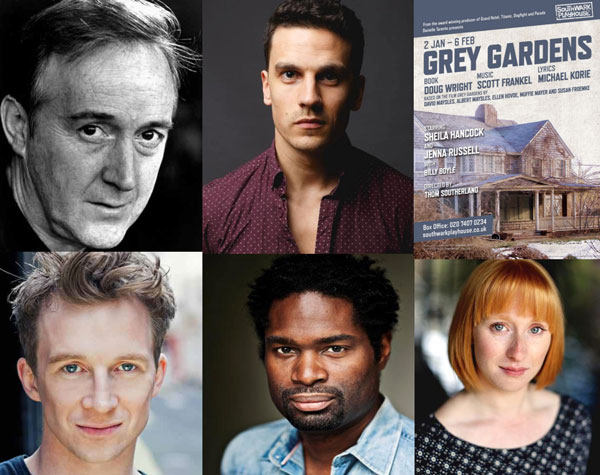 Final casting has been announced today for the European premiere of Grey Gardens the musical which will play at the Southwark Playhouse from Saturday 2 January – Saturday 6 February 2016.

The musical Grey Gardens is based on the iconic documentary, telling real life rise and fall of Jacqueline Kennedy Onassis’s aunt and cousin, Edith and Edie Bouvier Beale.  Starting in 1941 at an engagement party at Grey Gardens, the Bouvier’s mansion in East Hampton, Long Island, the musical tracks the progression of the two women’s lives from American aristocrats to reclusive social outcasts living in such squalid conditions, in a home overrun by cats, that the Health Department deemed the mansion ‘unfit for human habitation’.

Billy Boyle, who has just finished two years playing Grandpa George in Charlie and The Chocolate Factory at the Theatre Royal Drury Lane, is a veteran of the West End stage having played leading roles in over 15 hit shows from his big break in Maggie May in 1964 to Barnaby in Hello, Dolly! at The Theatre Royal Drury Lane, Maurice in Disney’s Beauty and the Beast and Dirty Dancing.

Aaron Sidwell joins the cast direct from starring as Johnny in Green Day’s American Idiot at the Arts Theatre. His other starring roles include the original West End cast of Loserville (Garrick) the lead in Cool Rider (Duchess Theatre) and Carl Bruner in Ghost The Musical. He played Steven Beale in over 100 episodes of EastEnders.

Rachel Anne Rayham has just played Louisa in The Sound of Music. This is her London professional debut.

Grey Gardens, with Book by Doug Wright, Music by Scott Frankel, Lyrics by Michael Korie, is produced by Danielle Tarento.