The Bunker Theatre in London has announced a new season including a festival of work from black artists, a new play from Anna Jordan and debuts from emerging writers.

The theatre’s autumn season will open with This is Black, a curated festival from Steven Kavuma, founder of Diversity School Initiative, providing a supportive fringe space for black creatives to produce new work.

It will explore identity, hate crime and family relationships with alternate double bills of All the Shit I Can’t Say to My Dad by Abraham Adeyemi and Blue Beneath My Skin by Macadie Amoroso as well as …cake by babirye bukilwa and The Sun, The Moon, and the Stars by Dipo Baruwa-Etti. There will be an accompanying exhibition by Sophia Tassew, who created the recent plus-size mannequins for Nike. The festival runs from 5 to 25 August.

Jade City by Alice Malseed will examine masculinity, vulnerability and friendship through the rich language of Belfast. Directed by Katherine Nesbit, it will run from 3 to 21 September.

The theatre will be transformed into a pub for We Anchor in Hope by Anna Jordan whose previous work includes Yen, Chicken Soup and the adaptation of Brecht’s Mother Courage and Her Children at Manchester’s Royal Exchange. Directed by The Bunker’s artistic director Chris Sonnex, it will interrogate the impact on the community when the local pub closes. Running from 25 September to 19 October, it is presented in association with the Royal Court.

Germ Free Adolescent by Natalie Mitchell is an OCD love story for anyone who has ever worried they are not normal and is based on the writer’s own experiences. Directed by Grace Gummer, it runs from 29 October to 9 November.

Two debut plays, i will still be whole (when you rip me in half) by Ava Wong Davies, and Before I was a Bear by Eleanor Tindall, will share the space from 12 to 23 November. Davies’ lyrical piece explores the relationship between women in a family as Tindall’s considers sexuality, friendship, celebrity and shame. 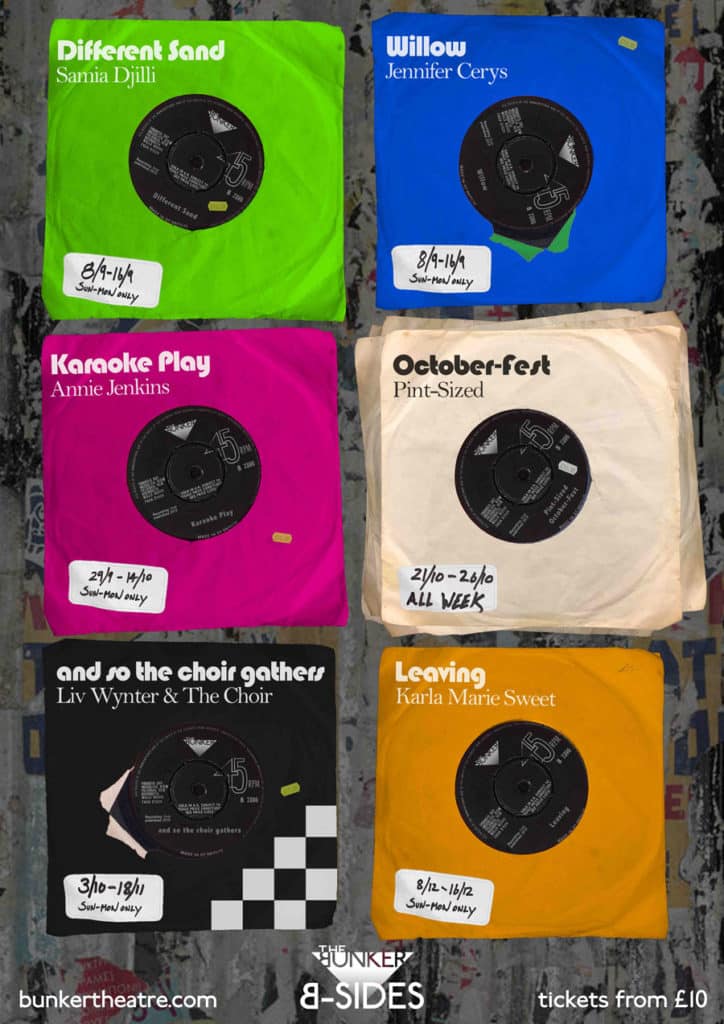 The critically acclaimed My White Best Friend and Other Letters Left Unsaid… from Rachel De-Lahay and Milli Bhatia returns to The Bunker from 25 to 30 November. Aimed at exploring and exposing privilege, it features especially commissioned letters that are performed each night unseen. After premiering in March, the new run will feature new letters.

After the success of Emma Dennis-Edwards’s Funeral Flowers in the spring, Harts Theatre Company have joined Pint-Sized and Damsel Productions as The Bunker’s resident companies, while Ann Akin and Anoushka Warden join Debbie Hannan on The Bunker’s team of artistic associates.

From 3 to 21 December, Akin will produce Matilda Ibini’s new play Little Miss Burden, directed by Hannan, bringing together 90s nostalgia and Nigerian culture to tell the truth about growing up with a physical impairment.

The Bunker has also introduced a programme of B-Sides to ensure emerging artists have a place to thrive. Including new work from Annie Jenkins and Liv Wynter, this curated run of Sunday and Monday nights will fill the stage with cult hits, experimental work and future classics, reinforced by the return of Pint-Sized’s week-long festival.

Sonnex said: “Theatre is a village. When we wait in the foyer, when we watch a performance, when we talk about the show over a drink, we reinforce our togetherness, our shared language. We watch in unison as a congress of actors, writers, directors, designers tell us stories to unite and challenge us.

“We are ensuring that the artists in our community have a place to experiment in our B-Side season. The Bunker is proud to work with so many talented artists that represent our society. I believe they will be mainstays in our theatre village for years to come.”

He added that The Bunker would be continuing its partnership with Black Ticket Project helping young black people access the arts, giving away more than 250 tickets across the season.

Otherwise, please click here to continue to the Bunker Theatre...
x
Send this to a friend