Emily Hardy chats to Glee’s Telly Leung about his show at the London Hippodrome, Rent, Godspell, Allegiance, and life as a musical theatre performer on Broadway. 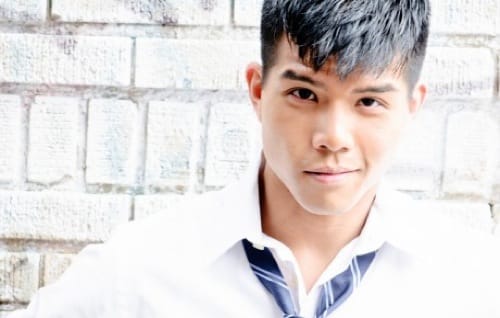 TL: It’s so funny. I love working on Broadway, but to perform in the West End would be a dream come true. I went to London in 2006 for a weeks vacation from Wicked and I fell in love. I think most Broadway performers dream of living in London for a while, to do a show that is so popular here that the whole cast get taken over to London. The guys from Hair a few years ago were living the dream.EH: There seems to be more and more of that happening now. Have you seen Matilda yet?TL: I have! I just saw it! It’s so fantastic. I grew up on Roald Dahl, believe it or not. I read all of his books as a kid.

EH: You and me both.

TL: I know how hugely popular he is in Britain; he really caught on here too. I feel like Roald Dahl made me love reading.

TL: I do. I really do. I’m an only child – a son of immigrant kids from China, and my parents definitely had other dreams for me besides theatre. They wanted me, understandably, to get a blue collar job, to be a doctor or a lawyer, earn 6 figures and live the American dream – a life that, being immigrants, was not available to them. So, I studied hard and I got into this maths and science school in NYC but, it was there that I decided my brain was too lopsided. I needed to exercise the other side by doing something else… like theatre. I starting doing drama after school and the first thing I ever did onstage was a production of Pippin.
As I got older, I loved going to see theatre. The blessing of growing up in New York is that Broadway is on your door step and there were two shows that really blew my mind:

The first was Rent. The characters were people I saw on the street every day and I could see myself being in it too because it was such a diverse cast.

The second was Hello Dolly with Carole Channing. I remember I had just finished my SAT’s and I wanted to reward myself. A rain storm hit Time Square and I was drenched sitting in the freezing cold, air conditioned theatre. But I didn’t care. At the end of act one, Channing sang Before The Parade Passes By, and it’s a moment that obviously stuck with me because that song features on my solo album. She possesses this unique ability to make everyone in the theatre feel as if she is singing only to them.

EH: Do you feel like Broadway still has those archetypal performers?

TL: Yes, but it’s all very different now. The performers I really admire are those who are unique: The Alan Cummings, the Sutton Fosters and the Kristin Chenoweth’s, for example. I think the requirements are different now though, with acrobats and actor-musicians and everything else. That triple threat thing doesn’t really exist anymore. When I did Godspell last year I had to join the musicians union because I played piano and sung at the same time. I never thought I would have to do that. It was the most nerve-wracking thing I’ve done.

EH: Rent was the show that turned everything around for me when I was growing up, but my favourite musical to listen to was Godspell. I never really got what was going on but I played it and played it until I wore the CD out. Your 2011 cast album, in my opinion, is the best recording of the show to date.

TL: Thank you. There really is something special about both of those shows; it’s so funny that those are your two favourites. Those are the shows I am always cast in – the ensemble shows. Rent ran 13 years on Broadway but only a very small group of people were actually in it because people didn’t leave. Why would they want to leave such a wonderful ensemble? Everyone in those shows is an important story teller. It makes sense to me that those two are your favourites.

EH: Have you ever dabbled on the creative side of things?

TL: I’m starting to do a bit of producing and writing, but what I love to do are my own cabaret shows. Back in the day, you could just rent a room at Don’t Tell Mama, 46th Street and get friends to come along so that you’d have an opportunity to grow as an artist and master the art form.

EH: We go stale if we don’t forge those opportunities for ourselves in-between jobs.

TL: Exactly. My first Broadway show was Flower Drum Song with Lea Salonga as the star, but we opened and closed within four months. When it closed, I learnt a very hard lesson in show business. I didn’t feel done, so I started putting a show together and developing the patter. Now, every time I finish a Broadway project I try to create something that’s my own. I also teach on the side. I love being able to give kids the beginnings of techniques and tips that they can take away with them, especially when they are so full of passion. I love acting, don’t get me wrong, but I have a feeling that I’m not really meant to act. I’m meant to retire teaching, not acting. I would be nowhere without my teachers.

EH: Do you feel like Broadway is accessible? Do the emerging kids stand a chance?

TL: There’s a lot of celebrity casting here, as there is in London, but at the end of the day, talent, drive and persistence do pay off. And that’s all we can tell them. It’s survival of the fittest and survival of the most patient. And of course, it’s not always what you imagine it to be. The minute you make performing your profession, you have to balance art and commerce. If money was not an issue, everything would be different, but as it is, you do the big successful, commercial musical to earn the cash and then, later on in the year, you do Antigone in a church basement somewhere for the artistic pay off.

EH: Maria Friedman said that the big, commercial shows are the ones that buy you your kitchen.

TL: That’s exactly right. I’ve been in the business since 2000 and it really is a balancing act. And listen, I’m at an age right now where I occasionally question what I’m doing, but I recently just figured it out: It’s because I grew up an only child and when I join a company, it’s instant family. With every show you do the family grows. Everybody has been on top and everybody has had a show close and had to collect unemployment the next day. Because everybody understands the cycle of show business, we can support each other. That support system does not exist in Hollywood, for sure.

EH: What are you working on at the moment?

TL: A new musical called Allegiance with George Takei and Lea Salonga. The show is about the internment of Japanese Americans during WWII – a period of history not many people know about and it focuses on a family torn apart by the politics. We’ve been working on readings and workshops of the show for over three years and we finally did our world premier last year at the Old Globe in Santiago. It broke box office records so we brought it here, humpty-dumptied it, (took it apart and put it back together again) and we’ve just done our big industry presentation. We hope that this will now lead to a Broadway run in the spring next year.

EH: You’re incredibly passionate. It can’t have been easy to get a completely new, unbranded musical off the ground.

TL: It has demanded a lot of sacrifice and determination, but the piece is worth it.

EH: Are you excited about performing in London at the Hippodrome?

TL: I’m so excited. The initial reason I’m in London is for G3 – a big convention for Glee fans, Gleeks. I couldn’t go on tour with the Warblers because I was working on Allegiance so this will be my first opportunity to meet fans from across the pond. And, whilst I’m in town, I’ll be performing my show with my jazz trio. Several of my American friends have played the Hippodrome: Sherie Rene Scott, Caissie Levy, Michael Patrick Walker. I love that it is bang-smack in the middle of the west end and it is such a perfect space for my show.

EH: Can you let us in on the set list?

TL: Last year, I released an album of cover songs with new arrangements called I’ll Cover You (which is my favourite Broadway love song ever). We’ve done Stevie Wonder, show tunes and even Madonna in a new way. We’ve reinvented them, experimenting with meter and tempo but retaining what people love about the songs. For example, we do In My Life, by the Beatles, but we do it as a lullaby. My parents, being Chinese immigrants, learnt English by watching TV and listening to music; my song choices are absolutely influenced by what they listened to. When I was a baby, the only thing that would stop me crying was music by the Beatles.

EH: You were never going to go into Maths and Science then!

TL: I know! Never. So, in short, the show consists of arrangements of the songs that matter to me and tell my story. It’s on July 20th and 21st, and Declan Bennett from Once, (my buddy from Rent), is going to be performing with me on the Sunday. He’s so fantastic – the genuine, tortured song writer. You know, my dream of dreams would be to pack a bus one day with my trio and tour the country doing my show.

EH: It sounds fantastic. I can’t wait to see it.