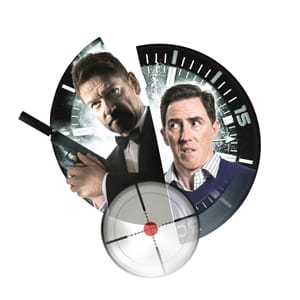 Directed and adapted by Sean Foley, The Painkiller will be the fifth production in the Plays at the Garrick season and will play from 5 March until 30 April 2016.

Foley said: “I’m delighted to have the chance to further develop this comedy with the remarkable double act of Kenneth Branagh and Rob Brydon, who, together with the brilliant Mark Hadfield, were a joy to direct in the first production.

“I know that they are excited as I am to also be welcoming to our cast the extraordinary talents of Claudie Blakley, Marcus Fraser and Alex Macqueen, and we will all be working as hard as possible to bring this darkly hilarious farce to explosive life for London audiences.

Meanwhile, The Painkiller will be the professional debut for Bristol Old Vic Theatre School graduate Fraser, who plays the Policeman.

The Winter’s Tale, Harlequinade / All On Her Own, Red Velvet, The Painkiller, Romeo and Juliet and The Entertainer make up the inaugural seven-play season of work for the Kenneth Branagh Theatre Company.