Mark Ludmon reviews This Is Shakespeare by Emma Smith published by Pelican Books. 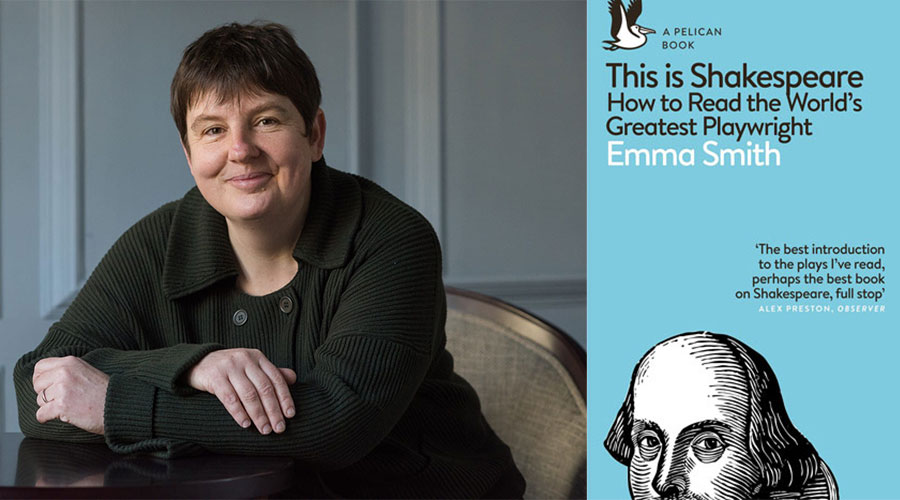 This is Shakespeare: How to Read the World’s Greatest Playwright
Emma Smith
Pelican Books
Five stars
BUY A COPY

Emma Smith, a professor of Shakespeare Studies at the University of Oxford, draws on her extensive knowledge and scholarship for This Is Shakespeare: How to Read the World’s Greatest Playwright, now out in paperback. However, despite this academic grounding and the grand promise of the book’s didactic title, it actively seeks to dispel the idea that Shakespeare’s plays are holy texts to be solved like puzzles. She demonstrates that they are “not monuments to revere” but living, shifting pieces of writing for theatre that continues to be interpreted in new and exciting ways into the 21st century.

The title itself is a little misleading. It is not an instruction on how to “read” the texts but more a guide to finding your own understanding of his work. Smith regularly refers to the “gappiness” of Shakespeare’s writing – the many ambiguities, the opaque characterisations, the silences, the lack of stage directions – which have allowed critics, readers, and theatre-makers to identify their own meanings. This can create a “careful impartiality” that leaves plays open to different interpretations depending on your political outlook. She notes that the plays prompt questions rather than provide answers, reflecting how Shakespeare is all about exploring ideas and uncertainties.

Smith tackles 20 of the 37 existing plays that Shakespeare is believed to have authored, from The Taming of the Shrew through to The Tempest. These have all had whole books devoted to them over the years – I have several on my shelves just on Hamlet – but Smith rises to the challenge of cramming an impressive selection of ideas and insights into around 15 pages on each one. These are not SparkNotes, although she manages to touch on many of the key themes, critical responses, and interesting historical details. Instead, matching the brief set by the book’s title, she demonstrates the different ways to approach the plays.

One way might be to pick up on a small detail and run with it. She explores Julius Caesar through the entry point of the tiny, often-deleted scene in which Cinna the Poet is mistakenly murdered by the mob, while her route to understanding Coriolanus comes from picking apart a brief moment in which the eponymous war hero forgets the name of a man who gave him shelter. In Twelfth Night, the supporting character of Antonio (often depicted in modern productions as gay) provides the entry to a particularly interesting analysis of the play’s complex networks of desire and gender.

Alternatively, you can look at the sources that inspired Shakespeare, exploring how deviations from the past point towards some kind of authorial intention. A well-trod path for study, these provide illuminating insights that touch on wider themes, such as Shakespeare’s transformation of three elegantly dressed courtly ladies in Holinshed’s Chronicles into the terrifying weird sisters of Macbeth. Smith also examines the plays within the structures of tragedy and comedy, finding some of them too slippery to fit into one form or another and occasionally switching between the two halfway through. She is also interested in the material practicalities of Elizabethan and Jacobean theatre and the first published “folio” texts, from rewrites and staging to the commercial appeal of sequels.

Smith peppers the chapters with examples of modern productions, reflecting her experience as a production adviser for the Royal Shakespeare Company, the National Theatre, and London’s Donmar Warehouse. She reveals how directors have tackled the “gappiness” to create their own vision of each play, mostly citing productions from the last 50 years, from John Barton’s 1974 RSC production of Richard II to David Tennant as Hamlet in 2009, but also looking at the shameless rewritings of the plots in the 18th century. From Keanu Reeves to Baz Luhrmann, film adaptations also make an appearance.  These are not the only contemporary examples in the book. Smith introduces delightful comparisons, such as a surprisingly apt allusion to TV comedy Friends in the analysis of Much Ado About Nothing. Using references such as celebrity culture and the #MeToo movement, she succeeds in making the book accessible and relevant to the general reader while still occasionally touching on more scholarly ideas around teleology, hermeneutics, and post-colonial studies.

Pulling together academic scholarship with performance history and centuries of critical responses, Smith reveals how the gappiness in the writing permits us to fashion Shakespeare into what we want him to be for our own time. The book is not only incredibly informative but succinctly highlights how and why we can find our own meanings in Shakespeare’s plays. With NT Live and the Globe, among others, streaming past productions during shutdown, the book – now published as a cute blue pocket-size Pelican paperback – also serves to provide 20 excellent introductions to how to watch the plays in lieu of programme notes.