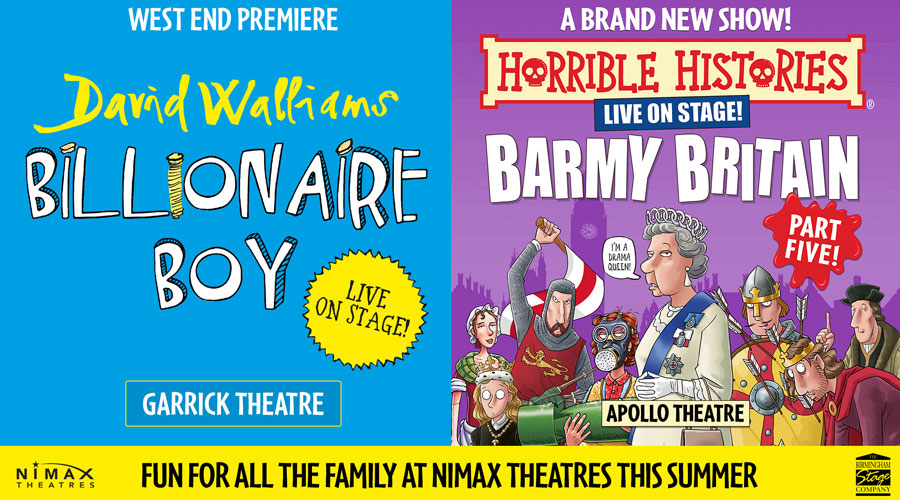 A year after UK theatres closed, Birmingham Stage Company are delighted to announce they will be back in two of London’s iconic West End theatres with the West End premiere of David Walliams’ Billionaire Boy and the world premiere of Horrible Histories: Barmy Britain – Part Five! to bring family entertainment into the heart of the capital.

Following the runaway success of the award-winning Gangsta Granny in 2017, bestselling children’s author David Walliams is returning to the West End with his second adaptation, Billionaire Boy.

Billionaire Boy started life as a novel in 2010, published by HarperCollins Children’s Books. In 2016 it was adapted into a BBC production and has since become a Christmas television favourite.

David Walliams said: “I am absolutely delighted this fantastic family show of my book is coming to the West End. It is really funny and I can’t wait to see it again.”

Billionaire Boy tells the story of Joe Spud, the richest boy in the country. He has his own sports car, £100k a week pocket money and two crocodiles as pets. But what Joe doesn’t have is a friend. So he decides to leave his posh school and start at the local comprehensive. But things don’t go as planned for Joe and life becomes a rollercoaster as he tries to find what money can’t buy.

Alongside the debut of Billionaire Boy, Birmingham Stage Company are delighted to bring a brand-new Horrible Histories production to Shaftesbury Avenue, with Summer 2021 marking ten years since the original record-breaking Barmy opened in the West End. The world premiere of Barmy Britain – Part Five! is full of crazy new characters and rude new rulers from Britain’s barmy past.

Will you be conquered by King William? Will you sink or swim with King Henry I? Will Thomas Becket get the chop? Go house hunting with King Henry VIII! Join the gorgeous Georgians as they take over England! Break into Buckingham Palace and hide from the Queen, then watch out for the witch of World War Two!

Whilst the UK continues its fight back against the pandemic and children continue to miss out on live arts, the West End is coming alive this summer to bring back live theatre for children and their families. For added reassurance, the capacity at the Apollo and Garrick Theatres has been currently reduced to circa 50% to comply with COVID-19 Secure guidelines with socially distanced seats and will continue to adhere to government guidelines.