The UK’s first-ever socially distanced Big Top panto is to take place in the grounds of a beautiful country estate. Aladdin starring Jaymi Hensley at the Luton Hoo Estate in December 2020. 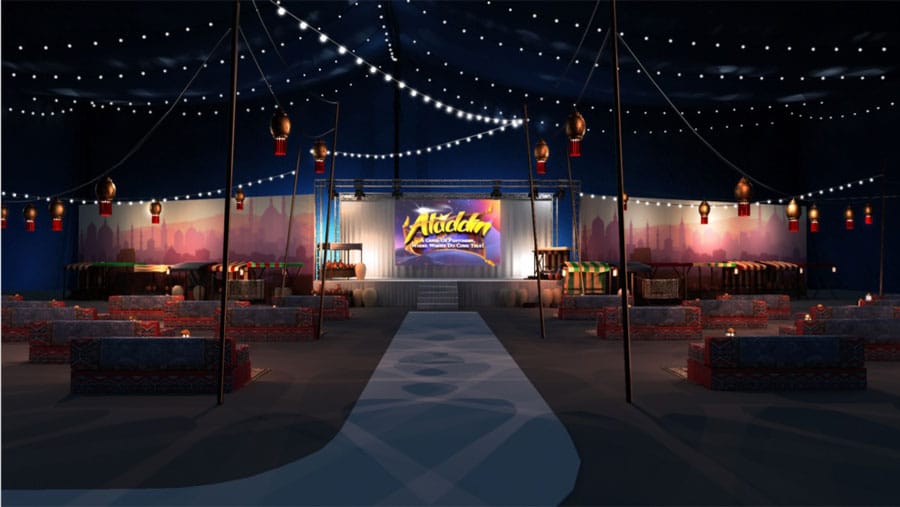 Jaymi Hensley is to star in a socially distanced big top panto production of Aladdin – A Genie-us Pantomime in December 2020.

Aladdin – A Genie-us Pantomime is the brainchild of entertainment producer Andy Mills-Brown who is determined pantomime will go ahead in 2020 despite theatres still being unable to open at capacity.

Instead of a traditional theatre setting, Andy’s magical production of Aladdin will see panto’ fans enter the theatre of Agrabah in a Big Top. And rather than rows of seats close together, the Big Top will be filled with socially distanced sofas suitable for up to four people.

Andy, who is Executive Producer of the production, is Founder and CEO of multi-award-winning theatrical entertainment producers TAG (Talent Artistic Group).

Speaking about Aladdin, Andy said: “Like everyone else in the entertainment industry our business has been devastated by Covid-19 but we really are determined that the show must go on.

“We would love to be working with theatres this year but as that just cannot happen at the moment we decided we would do our utmost to ensure the great British institution that is the traditional Christmas pantomime, can go ahead.

“Our production of Aladdin will be unlike any pantomime people have experienced before. The show will take place in the most enchanted setting of a Big Top tent and everyone will have their own personal area with a four-seater sofa.

“It will be different, there’s no question about it, but we feel this is the most sensible and exciting way to be able to stage a pantomime that people will feel safe and comfortable at and most importantly, enjoy.”

With an amazing cast, dancing, singing and all the tradition you expect from a Panto, this fun-filled family show promises to be entertaining from start to finish.

The full cast is yet to announced but Jaymi Hensley will be spreading his magic as he takes the role of the Genie.

Jaymi, who has appeared in several pantomimes and toured as Joseph in the UK production of the smash-hit musical Joseph and the Amazing Technicolor Dreamcoat last Autumn, shot to fame when he and fellow Union J band members came fourth in the 2012 series of The X Factor.

Jaymi said: “I am very excited to be getting back on a stage and in a panto’ too. For British families a visit to the panto’ is synonymous with Christmas so I am delighted Andy and his team are doing this.

“It’s going to be a great show and the fact we are doing this outdoors in a Big Top will just make it even more magical.”

The Big Top Panto theatre, which will be covered and heated, has a capacity of 600 and bookings are for a minimum of four people who will be assigned their very own four-seater sofa in a socially distanced area of Aladdin’s Arabian market.

The outdoor theatre with indoor comfort will see Aladdin performed at the Luton Hoo Estate on the border of Bedfordshire and Hertfordshire from Tuesday December 15 to Sunday January 3.

BOOK NOW FOR ALADDIN IN THE BIG TOP