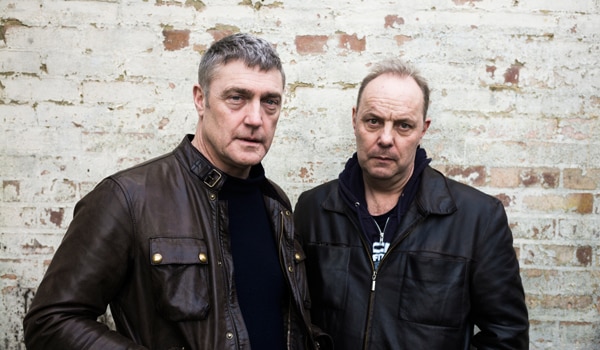 Q: What initially drew you to A Steady Rain?

VR:  I was looking for a really good contemporary play and one that didn’t have a very big cast as we couldn’t afford to pay a lot of actors. I came across Steady Rain and liked it so much I thought I’d like to do it myself. I don’t usually do much theatre – I’ve only done a couple of plays in the 15 years.

DS: I was immediately drawn to the amazing script. Very rarely do you read a play and think I absolutely have to do it and that happened for me. It was the kind of drama I just love to watch, the classic American film noir like Seven and the network TV series The Killing. The chance to work with Vincent Regan as well as I’d heard lots about him over the years.

Q: Vincent, you’ve just finished up at the East Riding Theatre. That must have been an experience

VR: It took a lot of years for us to get the theatre set up. When I first moved to Beverley, East Yorkshire, there was no theatre in the town and I felt there’d be a demand if we got one opened. At the time of the recession, we had no funding but were given an old Baptist chapel from the council which we love as it’s a very charming place with a real atmosphere. When we did Steady Rain, we sold out for three weeks. We had 170/180 people coming a night so it proved to be quite a success.

Q: How will it differ at the Arcola from the ERT?

VR: ERT is a more traditional procedure march, Arcola is more of an in-around experience. You’re actively aware of where the audience are. We’re currently doing some subtle restaging at the moment. You could say it’s an immersive experience.

DS: It’s one of my favourite theatres they do a lot of really good new writing here and it’s really connected with the community. There’s a lot of people that like this style of theatre a lot and see the Arcola it as a happening place so I think it’s going to going to do really well here. 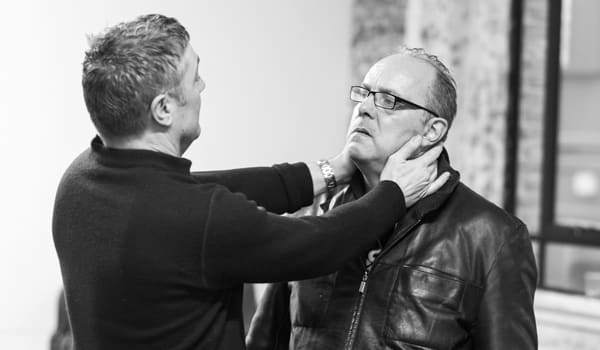 Q: What sort of audiences do you get? Do you think there’ll be a stark difference between Yorkshire and London?

VR: Old people in the north, young people in London. We’ve got young people coming – we do have young people in Yorkshire! – but our majority of our audience is older whereas in London, it’s a much younger crowd. What I’m excited about is it’s very cinematic, it’s almost like watching a box-set from HBO. It’s definitely for an audience of young people, especially for people that don’t come to theatre it’s got such a strong narrative. They’ll really enjoy the narrative and hopefully come and see more plays.

Q: It’s done well Stateside. Why will this play be of interest for British audiences?

DR: There’s definitely a curiosity here and a massive appetite here. We love so much of this noir American drama. Beyond that, Keith Huff is an amazing writer. His dialogue and his description, it’s a talent and word-of-mouth will men people will come. Arcola bookings are (already) better than a lot of the plays had in the early stages.

Q: David, you’re well-known for your stint as Jay’s bullying dad in The Inbetweeners. What have you been up to since?

After The Inbetweeners, I tried to do straight acting. In England, what I get on TV tends to be comedy so I changed it up and went to America for a little while. I got a part in a vampire series called The Strain which Guillermo del Toro produced which was great. I was over in Canada filming for three months and got to work with David Bradley which was fantastic. I had a fantastic scene with David Bradley and another one with an American actor called Jamie Hector.

And then ironically, I just got back to England and was in the second season for a comedy series called You’re the Worst and the character was not dissimilar to Jay’s dad. We go to LA to see my son who’s a writer and we caused havoc. I was weirdly trying to get away from comedy and ended up doing just that!

Q: What do you do to prepare for the role each day?

DS: I always start first with the script, looking for all the clues of character in the script. It’s a bit of detective work. From the script, you start to get the psychology of the character then you start working inside out, the physicality’s of the character. I’ve seen a lot of cop stuff of this genre so it’s something that’s immediately accessible to me. I start thinking like a policeman, start behaving like a policeman, becoming a bit methody on it. A big part is working with Vincent, building a relationship between the two characters, so there’s a lot of work, it’s a two-hander. There’s an awful lot of dialogue to learn. It’s pretty much a full-time job for me at the moment – not only getting the script down under my belt but also getting into the psychology and physicality of the character.

VR: I read the play every day. I sit down in the dressing room and I’ll go through the play beforehand. I also try to get as much rest as I can, have a good meal an hour beforehand.

Q: What’s your favourite moment in the show?

VR: As this is a two-hander, you’re on stage all the time and there are very long speeches where you describe action. But when you catch the emotion and you’ve got the audience in the palm of your hand and completely engaged, that’s a great thing for any actor on stage. There are moments of coldness, then there are real moments of tenderness and sadness and (when) you can sense the audience going through the emotions with you, that’s always a great experience for an actor. 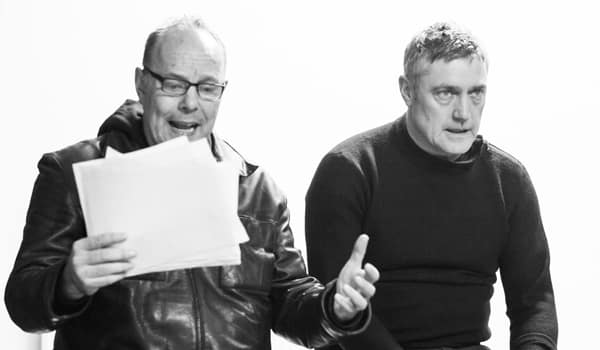 Q. When playing challenging characters, do you ever feel sympathy for them? Just take Denny and Joey, they inadvertently gave back a boy to one of America’s most notable serial killers

DS: These are robust policemen who are used to being out in the street, speaking in a sort of vernacular, they’re not massively empathetic towards people. Yet I have tremendous sympathy for my character. He’s a regular guy, a good guy. I always find a connection with the character I play; I have to find something in them that I can empathise with them to relate back to myself. Even if you’re playing an absolute swine you can find an empathy with the character or point of reference.

VR: Absolutely, with an actor you’re aware you have to find something to love in every character – even if it’s a monster. Denny and Joey go through difficult periods in their life with drastic consequences, but whatever bad things happen in the play, fundamentally they’re good people – just affected by very bad circumstance.

Q: The narrative is inspired in part by the corruption of the Chicago police form. How easy is it for corruption and temptation to loosen morals? Do you think people can get side-tracked by temptation?

DS: If you’re not very wealthy and there’s a temptation to earn a quick buck, then maybe run some prostitutes on the side make a bit of money, I think of a certain mentality unless you’re a real boy scout cop it, it’d be quite easy to have your head turned especially if everyone else is doing it too. I don’t know for definite, but there are certain police forces in any given decade where corruption has been rife and this play is a mish-mash of times. There’s a little bit of the 70s in there, a bit of 80s and definitely a suggestion that there is police corruption.

VR: When you’re given power in the police force, certainly power over people, it’s power that’s the corrupting thing. If there’s a chance that you could make some money on the side, some people would make that decision and others wouldn’t. The character I play is one of those people whose moral compass is a bit skewed.

Q: It’s a world that offers little chance of escape or redemption? Do you think this applies to real life, say with ex-offenders?

DS: Redemption’s a very personal thing. If you’ve been imprisoned in life for murder, I guess you have to find a purpose. It all depends on what you need redeeming from. In the play there’s religious symbolism all the way through, a hefty dose of Catholicism and the cleansing is rife throughout.

VR: I’m an optimist and a great believer in giving people second chances for personal redemption. This hasn’t affected how I portray my character, however. I don’t make any choices for the character that isn’t in black and white, you’re just the disciple as an actor.

Q: While Keith Huff has described it as two cops, a table and chairs and two coffee cups that tell the story, it’s been optioned for a film adaptation directed by Stephen Spielberg. Do you think a film can do this story justice or does it work more in a theatre setting?

DS: It works well on both mediums and I can see it as a dark, intense psychological drama. Theatre production is very much a story-telling exercise and allowed the audience to use their creative imaginations. We deliver the dialogue and allow the audience to go into a journey.

VS: Theatre is a different kind of fish to filming and TV but it’s really enjoyable as it cuts loose and it’s just you and the audience which is very different but very enjoyable.

Q: What are your short and long-term goals for the play?

VR: I want to raise profile nationally and bring the shows down to London do this as we’ve only been going for a year. I’m hoping in the future to be involved with the Arcola and the Arcola to be involved in the ERT so it’s creating a relationship really. I’m hoping the play is a huge success, I hope a lot of people come to see it; it’s one of the plays that deserves an audience.

A Steady Rain runs from 10th February to 5th March 2016 at the Arcola Theatre. Book Now

Layla is a London-based writer and freelance journalist. Her words have appeared in VICE, The Telegraph and The Independent among others. Formerly Culture Editor at Kettle Magazine, Layla is continually captivated by London’s vibrant theatre scene. Her biggest acting acclaim was playing the moon in a school play.