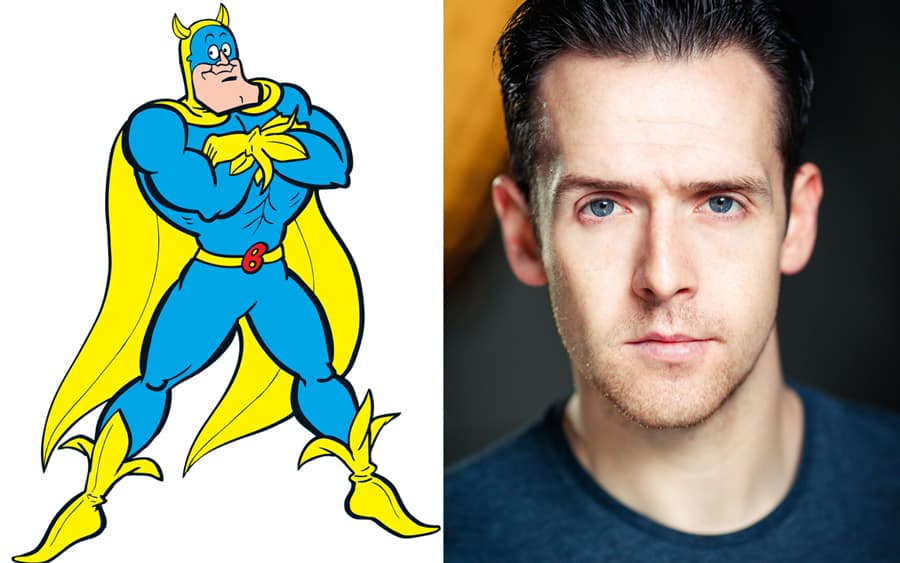 Casting was today announced for Bananaman the musical which is to run at Southwark Playhouse from 15 December 2017.

Bananaman, the Man-of-Peel, is flying out of the pages of much-loved comic Beano, and the hugely popular TV cartoon, in the world premiere of Bananaman the Musical, the hilarious new musical comedy by Leon Parris.

Bananaman is a unique member of the superhero ranks. He may have a jawline you can see from space and sport an exciting tight, lycra outfit, but this superhero has the muscles of 20 men and the brain of 20 mussels. Which isn’t much! Bananaman will be attempting to save the world at London’s Southwark Playhouse this Christmas.

Matthew McKenna (The Phantom Of The Opera, Sunset Boulevard) is to play the handsome hero Bananaman.

Superman’s on holiday, Spiderman’s not picking up – our only option, our very very last option is …Bananaman. This new show with original music and songs is sure to a-peel to both young and old BANANAfans!

Bananaman began life in the Nutty comic in 1980, and was a runaway success, transferring to The Dandy before joining the world’s longest-running comic, The Beano in 2012 and he is now one of Beano’s flagship characters. A send-up of the likes of Superman and Batman, he was the subject of the hugely popular TV cartoon that ran between 1983 and 1986 for three series and 40 episodes on the BBC and featured the voices of Tim Brooke-Taylor, Graeme Garden and Bill Oddie from The Goodies.

Bananaman the musical is written and composed by Leon Parris and directed by Mark Perry.

BOOK TICKETS FOR BANANAMAN THE MUSICAL