London’s hit production of Anything Goes starring Sutton Foster has announced a very limited cinema release on 28 November and 1 December 2021. 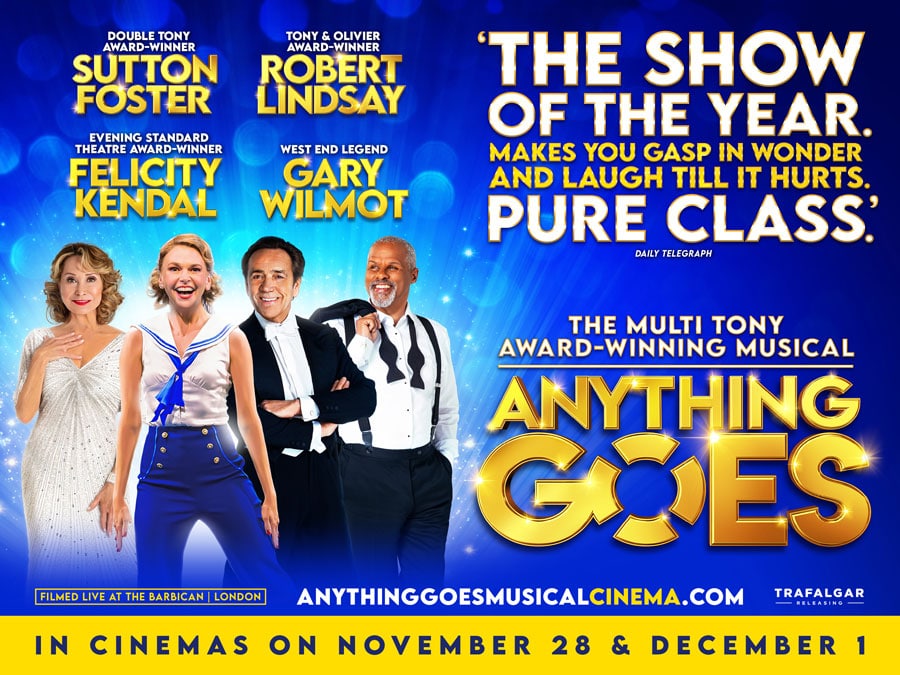 Since Anything Goes opened this summer at the Barbican, audiences have been on their feet night after night giving this multi-Tony Award-winning show multiple standing ovations at every performance. The critically acclaimed production features a 50 strong cast and ensemble has proven to be one of London’s hottest tickets. Anything Goes continues to play to sell-out houses, as audiences flood through the Barbican Theatre doors to witness this truly spectacular musical comedy. Plans for an international cinema release will be announced soon.

When the S.S. American heads out to sea, etiquette and convention head out the portholes as two unlikely pairs set off on the course to true love… proving that sometimes destiny needs a little help from a crew of singing sailors, a comical disguise and some good old-fashioned blackmail. This hilarious musical romp across the Atlantic, directed by the multi-award-winning Broadway director and choreographer Kathleen Marshall, features Cole Porter’s joyful score, including I Get A Kick Out of You, You’re the Top and the show-stopping Anything Goes.

Anything Goes has music and lyrics by Cole Porter, an original book by P.G. Wodehouse & Guy Bolton with Howard Lindsay & Russel Crouse and a new book by Timothy Crouse and John Weidman.  The musical also stars Samuel Edwards (Les Misérables / Wicked) as Billy Crocker, Nicole-Lily Baisden (The Book of Mormon / Let’s Face The Music) as Hope Harcourt, Haydn Oakley (A Christmas Carol / An American in Paris) as Lord Evelyn Oakleigh and Carly Mercedes Dyer (West Side Story/Chicago) as Erma.

Producer Howard Panter says: “The multi-Tony Award-winning glorious production of Anything Goes, directed by Kathleen Marshall, is not to be missed. London audiences already cannot get enough of this energetic and uplifting classic musical which has been sold out night after night. From four outstanding leading actors – Sutton, Robert, Felicity, Gary – to the spectacular supporting company, the glorious set design, the breathtaking choreography and of course the wonderful score. It really is ‘the show of the year’ that everyone should experience and I am delighted that via this two-day cinema release the show will get an even wider audience across the UK.”

FIND OUT MORE ABOUT ANYTHING GOES CINEMA SCREENINGS

Read our review of Anything Goes