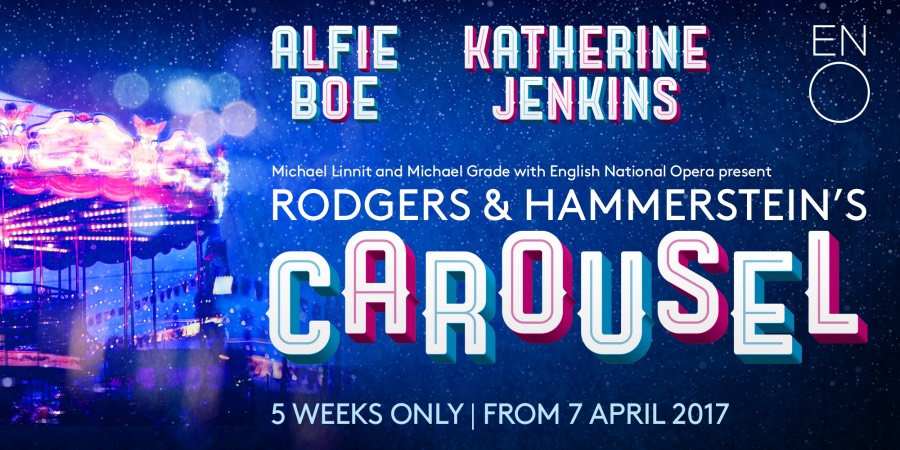 Rodgers and Hammerstein’s classic musical Carousel is to be produced at the English National Opera starring Alfie Boe and Katherine Jenkins as Billy Bigelow and Julie Jordan. The production will be presented for 41 performances only from 7 April 2017 to 13 May 2017 at the London Coliseum.

Following the success of Sweeney Todd and Sunset Boulevard, this new semi-staged production will be directed by Lonny Price. The production will feature the award-winning ENO 40 piece orchestra and chorus.

Fifteen years after getting caught up in an armed robbery and taking his own life, the charming carousel barker Billy Bigelow gets a chance to return to earth and make amends. Discovering that his daughter Louise has grown into a lonely, troubled teenager, haunted by her father’s legacy, Billy vows to restore pride to his family.

Carousel features a sumptuous score by Richard Rodgers with lyrics by Oscar Hammerstein II and features classic songs like If I Loved You, Soliloquy, June Is Bustin’ Out All Over and You’ll Never Walk Alone.

Currently, on a sell-out tour of the UK with Michael Ball, English tenor and actor Alfie Boe has wowed audiences in the UK and Broadway with his performance of Jean Valjean in Les Miserables. On Broadway, he played J M Barrie in Finding Neverland and Rudolfo in Baz Luhrman’s La Boheme.

Katherine Jenkins will make her West End debut as Julie Jordan. The Welsh lyric mezzo-soprano, singer and songwriter represented Wales three times in the Choirgirl of the Year competitions and was a member of the Royal School of Church Music Cathedral Singers and the National Youth Choir of Wales. She has appeared extensively on television both in the UK and the US including the series Popstar to Operastar and Dancing With the Stars.

Tickets are now on sale for Carousel.