Our very own Helena Payne talks about Pleasure Dome Theatre Company’s production of Lorna Doone at the Valley Of The Rocks. 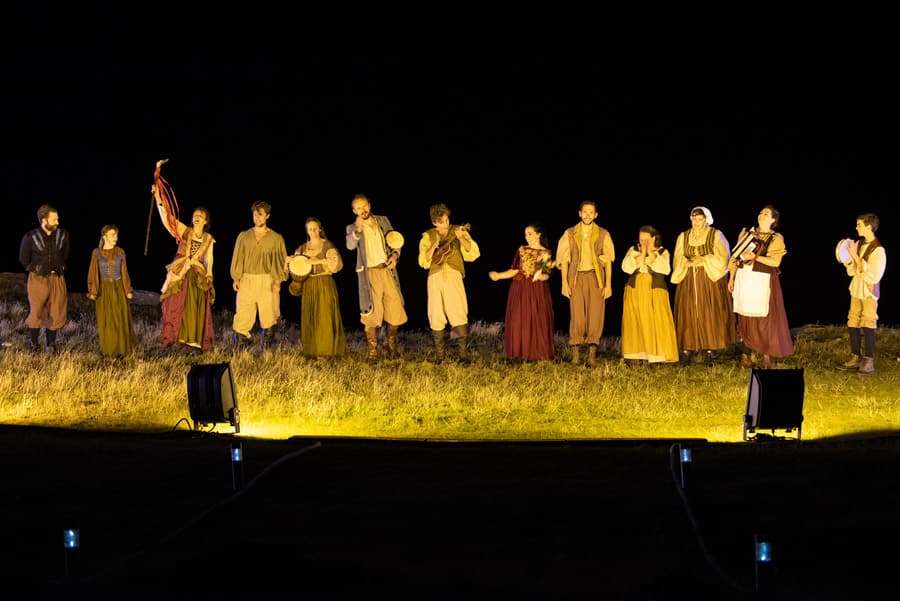 This, the fourth year Pleasure Dome Theatre Company have tempted the elements on the windswept coast of North Devon, contains many firsts: a new cast, a major anniversary (Lorna Doone was written 150 years ago), a new script – dramatised by Helena Stafford Northcote – and above all, fantastic weather. After 3 years battling gale-force winds, torrential downpours and stage-struck goats, Pleasure Dome finally lucked out with the weather. 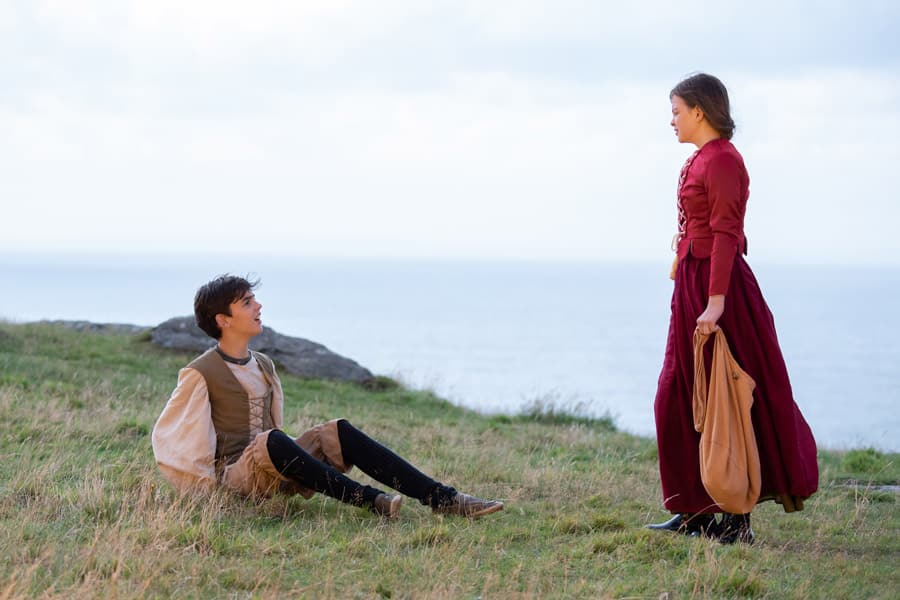 And, it must be said, the audience loved it, with record audiences and spectacular audience feedback. Under Scott le Crass’ taught, beautifully choreographed direction, the action comes thick and fast and the pace is never allowed to falter, something of a novelty for a 19th-century parlour tome.

In the dramatic surroundings of the Valley of Rocks, it’s clear that the company have come to understand how to craftily use the wild surroundings to their fullest effect. The action on the stage area itself stretches almost 30 metres; the whole natural world, from the rocks to the scrubland to the mountain paths, becomes the canvas on which the plot unfolds. The audience, seated in the middle of the action, is constantly having its attention drawn in contrasting directions – with scenes sufficiently compelling to halt picnics in mid-bite. Jai Morjaria’s lighting picks out the drama of the rocky scenery, creating the greatest backcloth for Lorna Doone that can be imagined: the brutal yet majestic reality of Exmoor. 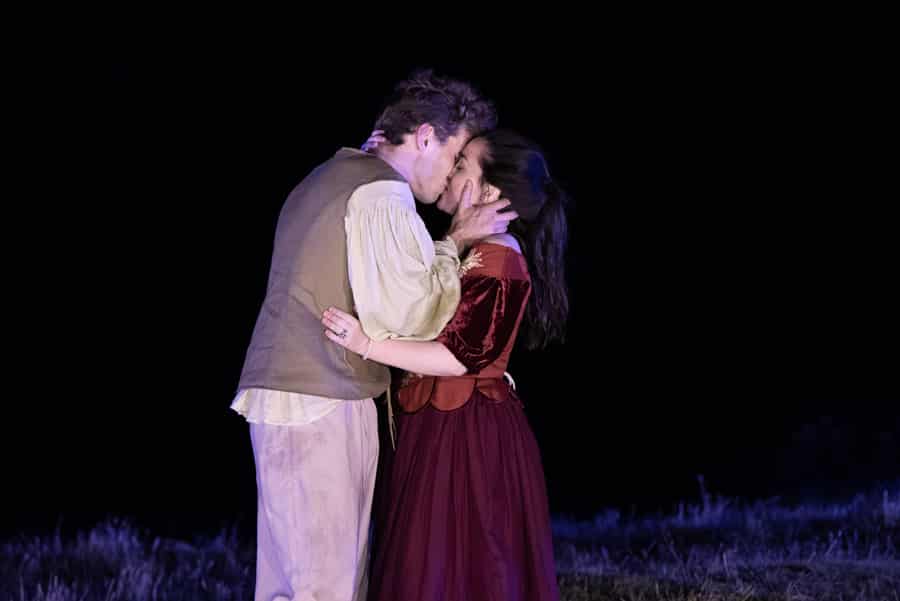 The two lovers, Lorna Doone and John Ridd, a West Country Romeo and Juliet, are charmingly portrayed from childhood by Freya Warren-Brand and Taylor Rose, through to their young adulthood by the alluring Josephine Rattigan and robust Edward Kaye. The scene in which they metamorphose from child to adult is one of the show’s most engaging moments, all the more effective for its simplicity. Rattigan and Kaye shoulder most of the key scenes, but this is emphatically an ensemble performance. 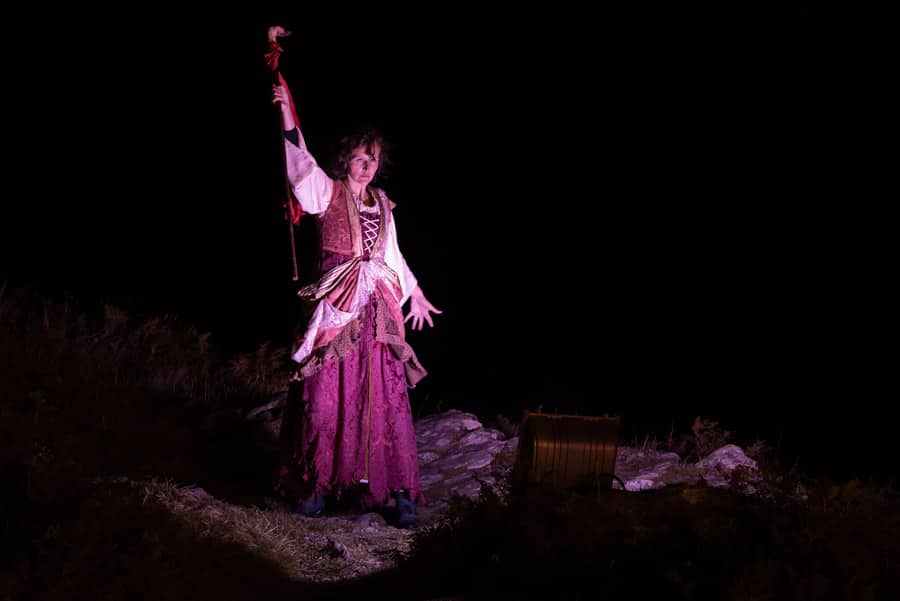 All the cast (with the notable exception of Lorna) double constantly. Jamie McKie makes a suitably evil Carver Doone, all unhealthy obsession and bullying menace. Yet in the role of Tom Faggus, a lovable local highwayman, he reveals a more engaging and softer side – especially in his blossoming relationship with Annie Ridd, played with verve by Roxanne Tandridge.

Steven Jeram makes his Charlie Doone, Carver’s sleazy sidekick, unpleasant and cowardly. Yet he steals the show as the old rustic, Jem, whose home-spun wisdom adds levity to some of the play’s most charged moments.

Nayomie James, as Sarah Ridd and the unfortunate Margery Badcock, is a tower of strength, holding the family together through almost insuperable odds. In this, she is more than ably assisted by Helena Payne’s Gwenny Carfax, whose presence throughout the play contributes pathos, knockabout humour and some quite beautiful singing.

Rachel Rose takes the role of Mother Meldrum, a local witch or sorceress who reputedly lived in the very valley of the production. Not surprisingly, she looked entirely at home in her surroundings among the rocks and the seascape, holding her staff aloft and incanting dark warnings.

Matt Gibbs begins the play as the ill-starred John Ridd Senior, then becomes the fallen noble Sir Ensor Doone. However, it’s as Jeremy Stickles that he commands the audience’s affections. Gibbs plays the part as a toff with a heart. By the end of the show, though, and after many exhausting adventures, it’s implied his heart and Sarah Ridd’s may well be beating as one.

Theodore Hadlow created the part of Judge Jeffreys and stole the show as the Preacher in the famous wedding scene. Using the classic Shakespearian device of presaging horror with humour, the moment that Lorna is gunned down on church ground is made all the more shocking as we were all laughing together immediately beforehand.

The spectre of Lorna Doone still haunts the cultural consciousness of our West-Country identity, but the novel is complex and lengthy. Distilling it into two hours is a considerable challenge but Helena Stafford Northcote has not only captured the essence of the story woven into the heart of Exmoor, she has recreated it for a 21st Century audience, and introduced themes of women’s empowerment to add to those of community.

This Lorna is no swooning adjunct to John Ridd – like her ‘sisters’, she’s fighting against injustice on the front line. Likewise, Tabitha Payne’s Lizzie is empowered by her self-conducted education. And Helena Payne’s Gwenny Carfax gets one of the evening’s biggest laughs as she bludgeons a hapless Doone out of the plot. This is not so much bodice-ripping historical fiction as baddy-bashing.

Lorna Doone is a show with colourful characters, adventure and fighting, stunning natural scenery, beautiful costumes, atmospheric music and pure drama. It is a story about love, about family, but most of all about community. In these divisive times, perhaps the power of community can aid us in understanding and respecting our differences, helping us find more that unites us than keeps us apart. One thing that has united audiences in the Valley of Rocks, however, has been the acknowledgement that they have witnessed a uniquely charming and enjoyable evening’s performance.