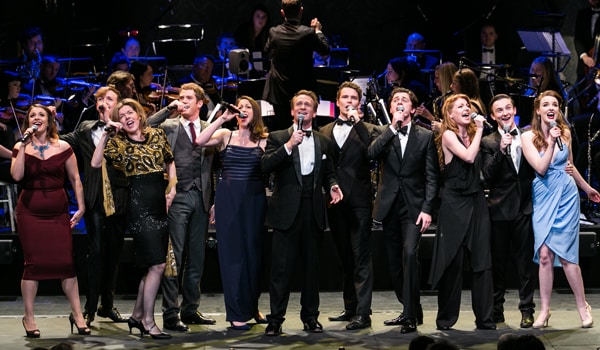 ‘I found that what lighting does for the visual aspects of the theatre, orchestration can do for the aural aspects.’ Jonathan Tunick

For two performances only, a fine line-up of singers and a thirty-piece orchestra led (with panache) by Alex Parker performed a delectable selection of numbers from the back catalogues of Jule Styne, Stephen Sondheim and Jerry Herman – all ‘Kings of Broadway.’

It was a rewarding evening, but not always in the most expected or obvious ways. For all the many fine incidental moments of individual singing and playing, the real heroes of the event were three individuals invisible on the night, whose names were tucked away in a remote sub-section of the programme – Jonathan Tunick, Jason Carr and Martin Higgins – the authors of the masterly orchestrations, both lush and deft, that provided the greatest pleasures and surprises.

Orchestrators rarely get much coverage. Many of us assume that Broadway composers make and always made their own arrangements, but this was and is almost never the case. Moreover, a lot rests on the orchestrator’s work: it is more than glitter and grated chocolate scattered on top of the cake. It is his creative palette that adds the final dramatic twist to the composer’s intentions. He (and it always seems to be he not she?) adds the last colour washes and layers of varnish that shape our reactions. However, we very rarely get to witness their work because for reasons of economy the usual accompaniments are a pit band or less.

So it was a particular treat to have a thirty-strong orchestra on up on stage conducted with both elegance and panache by Alex Parker. When the strings came in for the overture to ‘Gypsy’, there was a visible reaction in the audience, as though we all suddenly realised what we had been missing. I found myself making notes on harp glissandi, perky percussion, woodwind chatter and subtle string underscoring that enhanced familiar songs in ways I had simply not noticed or appreciated before. There were some problems of balance in the first half but after the interval there was a fruitful and more relaxed engagement between the players and singers operating from the forestage.

This was not an evening that sought to find deep thematic links between Styne, Sondheim and Herman: it was simply a celebration of their enormous contribution to Broadway history that judiciously blended many of the most famous individual songs alongside material that was less familiar. It was some of these untrumpeted gems that most caught my attention. In Herman’s case it was a reminder of just how many fine numbers there are in ‘Mack and Mabel’ that we do not know as well as we should; for Styne, that there are so many fine stand-alone character numbers that have not travelled as far as they should because the shows in which they originated did not have a long life; and, finally, a reminder of the miracle that is Sondheim’s ingenious ability to conjure up such depths of emotion from re-combining what are originally just tiny wisps of melody and fragments of harmony.

The twenty two singers spanned many generations and levels of experience and most took their opportunities well, but most especially those who were adept in making the hand microphone their friend rather than their foe. There were plenty of stand-out solos, snappy duets, and company numbers, but where this format most came into its own was in the several medleys chosen either from a single show or to illustrate a single genre of song (eg. and most insightfully – ‘Parades’). You never get to hear songs in these groupings outside celebration events, and there are thus many insightful points of comparison to be made.

With such a variety of material on display any selection of highlights is even more subjective than usual in a review. That said, I was particularly taken by Caroline O’Connor’s versions of ‘Broadway Baby’ and ‘Time Heals Everything’, which really developed the character as much as the melodic line. Among the less well known performers, Richard Fleeshman did a great job with ‘Buddy’s Blues’, one of those songs that is hard to bring off without the context of the scene (from ‘Follies’) to work with, and Bradley Jaden gave an intriguing and original reading of ‘Maria’ from ‘West Side Story’. Anna O’Byrne and Jack North gave a delightful version of ‘Let’s See What Happens’ from the little-known ‘Darling of the Day’, and North once more led the way in a superbly dapper ‘Put on your Sunday Clothes’, which served as the finale to the whole.

Perhaps the emotional heart of the show was to be found in a sequence of character numbers for leading ladies, which showed all three composers at their peerless best. I have mentioned Caroline O’Connor already, but Caroline Sheen, Anne Reid, Laura Pitt-Pulford, and Janie Dee all dug deep in these songs, which seem capable of endless reinvention in the hands of different generations of performers. Perhaps that is the best marker of the evergreen quality of these composers, and the finest witness to their continuing dramatic relevance and emotional salience today.

But, to return for a moment to the theme of my opening comments, woe betide the singer who does not pay attention to orchestral detail! I don’t want to make a bit deal of it but it was an error for Janie Dee, in an otherwise fine rendition of ‘The Ladies who Lunch’, to stray from the lyric and give a second toast to Pinter rather than Mahler, because there is a witty woodwind warble of a quote from the latter’s ‘Fourth Symphony’ neatly inserted into the score at that point.

This was a delightful evening, bursting with talent at all points, and consistently enjoyable. It is good to be able to stand back sometimes and reflect on the detailed musical joys of these composers absent stage apparatus. However, even when you allow for lack of rehearsal time there were loose ends and untidy production aspects that could and should have been caught in time. Some singers introduced their numbers, while others did not, and if we can’t always have an M.C. with the qualities that the impeccable late Ned Sherrin showed in ‘Side by Side by Sondheim’, this was an evening that cried out for some such figure to preside over and tie up the proceedings. The Palace and the Palladium are great blingy showcases for pageants such as this, but like large ships they need careful handling and can’t be taken for granted. Lighting, choreography, continuity and sound design all needed more work in these settings and let’s hope that next time they will get it. If so, then there will certainly be another star pinned to the masthead by me.