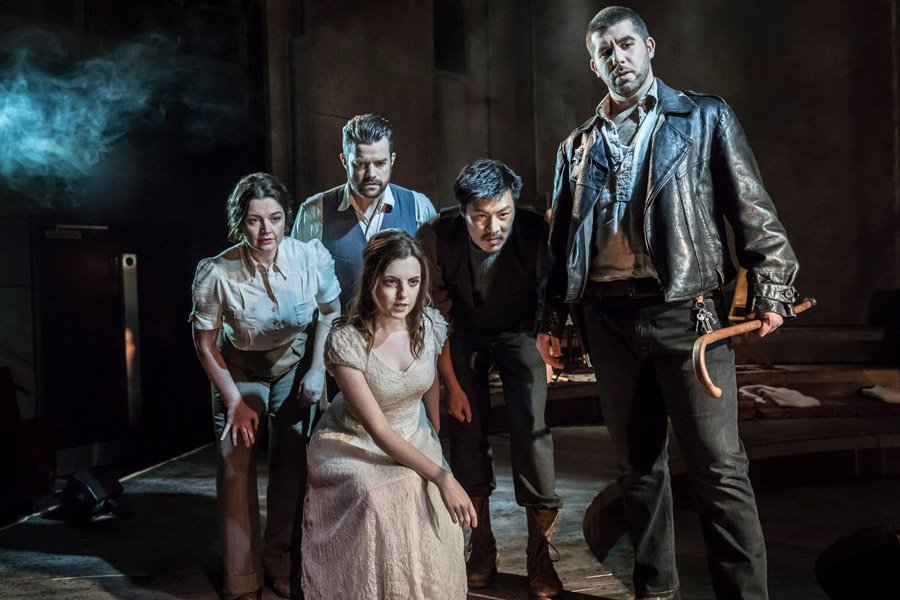 The idea of a ‘haunted lighthouse’ musical ghost story must have proved irresistible to the authors of this little opus, which has music and lyrics by Duncan Sheik (‘Spring Awakening’, ‘American Psycho’), book and lyrics by Kyle Jarrow, conceived by Keith Powell. And why not? They are treading in the well-worn footsteps of creatives like Henry James, Virginia Woolf, Benjamin Britten and Jack Clayton. Names to conjour with, as it were.

Here, we find ourselves on the Maine coast, dotted with lighthouses much beloved and immortalised by Edward Hopper – that poet of introspective isolation – and quite deliberately on the very fringes of America. And we are in 1942, the USA’s first full year of the second world war, with U-boots menacing the shores and fighter aircraft tearing across the skies. One such warplane, ablaze and carrying the father of the little orphan boy, Christopher (Fisher Costello-Rose or Stanley Jarvis), smashed into the waters of the ocean, propelling his mother into a state of permanent nervous collapse and removal into the local asylum for the insane. Thus, through the eyes of this Innocent, we are brought to the brink of life and death, to the border between the rational world and what lies beyond. He becomes prime material for the attentions of a pair of laconic spirits who reside in the tower (Simon Bailey and Niamh Perry), who, having gone to their deaths earlier as a result of Aunt Lily’s failure to light the beacon, now specialise in spooking this latest addition to the address. Meanwhile, Lily eeks out a living in the company of a Japanese American handyman, Yasuhiro (Nicholas Goh), who lends a touch of Melvillian exoticism to the story, much to the enduring chagrin of local Sheriff (Simon Lipkin) who eventually has the job of hunting him down as an Internment evader. And that, pretty much, is that. There’s a lot of fairly lengthy exposition, plenty of recapping of past events, and not much in the way of action: what events do occur, like Christopher getting stuck in the briney, are repetitive and cyclical. The cast do a terrific job of trying to humanise and dramatise the situation. However, theirs is a story that doesn’t really go anywhere.

Designer Andrew Riley has made this aspect of the work his guiding principle, and has created a stunning concept for the staging, realising it in concentric circles of wooden decking that sink down into the well of The Other Palace’s main stage, its upper levels holding the 7-piece band (a beautifully disciplined rock quartet with French Horn, trumpets and reeds, all led by MD Daniel A Weiss, with perfect sound from Gregory Clarke), and chairs for the convenience of the cast who are onstage throughout each of the two acts. Add to this Mark Holthusen’s artful projections, including slightly surrealist wave-like animations, and Alex Drofiak’s moody lighting, and you have one of the handsomest productions to grace this stage in a long while. It has a simplicity and coherence that are quite wonderful and a delight in their own right. Director Adam Lenson moves his cast around on this space with masterful precision, timing everything to the undulations of the country-and-folk-rock-inflected score with swirling, gyrating motions this way and that, around and around, and up and down its levels. The whole thing is presented with impeccable care and loving respect for every syllable and note of the text.

The cast, equal to the demands made of them, deliver performances of equally meticulous care and minutely controlled nuance. Always refreshing to listen to, they remain steadfastly convinced of the merit of their roles and the simple non-story they have to relate. And, moment by moment, the text seems to call for this kind of attention. The dialogue is generally quite well written, and the musical numbers are intelligently crafted, with the arrangements of Jason Hart, and especially the brass and wind contributions of Simon Hale, are magnificent and make the music sound quite ravishing and enthralling. It should work. It really should.

And yet it doesn’t… not quite. While we admire the artistry and beauty of the presentation, we are also constantly aware of being held away from it at arm’s length. The sardonic tone of the coolly mocking ghosts, and the unerring capacity for the human characters to avoid any kind of revelatory, open interaction (as opposed to calculated revelations that tend to deflate rather than inflame tensions) combine to disengage the hearts and indeed also the minds of the audience. We are aware of witnessing ‘something’, but we always seem to be glimpsing it obliquely, out of the corner of our eye, as it were. We can never meet it head on. This may well be the deliberate intention of the writers, or perhaps of the interpreters, or maybe of both, but it has the effect of cooling our enthusiasm for the characters and disengaging any possibility we might have had to empathise with them, much less care.

As for the music itself, it’s finely written, but the more you hear of it, the more you think you have heard it somewhere else, in a more exciting form. The opening number itself, so strongly reminiscent of The Eagles, is just one bold pointer towards a creative well-spring that lies elsewhere. Each musical item succeeds in doing this: directing us away from this show and towards any number of other ‘inspirations’. This ‘second-hand’ quality in the score is another effect that makes us switch off and stop paying attention. Overall, it’s an interesting experiment, a novel departure from the ‘norms’ of musical theatre. If it doesn’t quite fulfill its ambitions, well, that’s not the worse thing in the world, is it?

BOOK TICKETS FOR THE WHISPER HOUSE