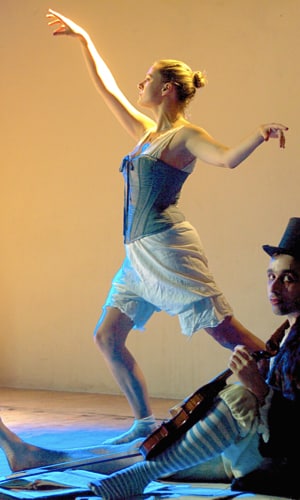 The Pell Mell Theatre Company has gained a reputation for putting on radical and vibrant productions of old classics. So I was interested to see what they’d do with Twelfth Night, one of my favourite Shakespeare plays and a story which is well embedded in the popular psyche.

It’s a play that needs no introduction (but here it is anyway); young Viola is separated from her brother Sebastian at sea and disguises herself as a man to enter the service of the Duke who rescued her. The wealthy countess Olivia romantically pursues Viola, who is herself pursued by the Duke.

It’s clear from the start that this is going to be a production with a difference. The first three minutes are an arresting explosion of dance and mime, without a word being spoken. This sense of anarchy runs deep through the evening, and whilst it doesn’t always work, it shows an originality and creativity that means you’re never quite sure what’s coming next.

The costumes from Giulia Scrimieri are delightful and a visual feast; full of clownish vivid colours and weird little touches. Even Lucy Laing’s beautiful Olivia has a touch of the Corpse Bride about her, whilst Toby’s gang of mischief makers are suited up like the royal family from a pack of playing cards.

The physical movement is fantastic and some of the shows comic high points (the tricksters hiding behind the bushes and Antonio’s ‘yellow garter’ scene) were given a lease of life due to some intelligent blocking and physical comedy. The accentuated movements were only distracting on one occasion, when a few of the ensemble were doing a bit of gymnastics in the background of the play’s establishing scene.

Whilst the production’s manic energy led to some brilliant costume and staging, it also led to a bit of over-acting. Lawrence Boothman’s demonic and grotesque Feste was a good example of this. With most of the cast acting the clown by default (it was a circus inspired production after all), Feste was left with nowhere to go but act as a sort of demented hyper-clown. Boothman’s natural charm, charisma and great singing voice generally made this work; at his best he reminded me of Alan Cumming’s Emcee in Cabaret. However, there were times when it did feel a bit like chewing the scenery – notably during the interrogation of Malvolio in the style of an American gameshow host, one of the innovations that didn’t quite hit the spot.

It was a brilliant team effort from a talented cast – Ella Garland’s Viola was likeable and sweet and had fantastic chemistry with Lucy Laing’s Olivia. Andrew Seddon was also appropriately pathetic as Malvolio although isn’t played quite contemptibly enough to feel he’s getting his true comeuppance.

Caroline Short put in a strong turn as the quietly scheming Maria and Angus Howard’s Sir Andrew was measured and funny throughout. Also, a word for Toby’s merry band of pranksters – their facial expressions and lurking sense of drama really caught the eye and made something special out of some potentially minor parts.

Jenny Gamble can’t have had a colossal budget for the set but the end result is both intelligent and creative. The clever use of an impromptu boxing ring and some sharp projections on the set’s white curtain brought the show’s second half to life. There were seemingly some new musical additions to the script from composer Adrian York and they all felt very much in keeping with the time period; so much so I couldn’t say which parts were down to him! The dance sequence at the end of the production was also great fun and ended the show with a bang rather than a whimper.

When it comes to a tried and tested classic like Twelfth Night, it’s sometimes quite rare to come away feeling you’ve seen something new and different. For better or for worse (mainly better), Pell Mell have dug deep creatively and come up with a lively and high-energy production that you’re certainly not going to see at the Globe any time soon.

Twelfth Night runs at the Space Theatre until 12th August 2015