The result is something that follows the great tradition of Noises Off and The Play That Goes Wrong, a slightly shambolic love letter to the stage and all of its obstacles, the creative struggles, the backstage arguments and all. It’s also wonderfully meta and self-aware, with constant reminders that this is a show, the characters are in a show, and who on earth would watch something like this? Cue a wry smirk to the audience. As soon as the audience gets too comfortable in the world created onstage, the character of Hunter will announce that the scene we’re watching is getting too long, and throw the show into the next one. It’s self-referential to the extreme and works wonderfully

There’s always the concern that these ‘behind the scenes’ type shows are exclusively for theatre ‘luvvies’ and the press night audience did seem to be performer-heavy, with empathetic groans and laughs as they recognised the frustration of, for example, losing a role to the girl who sings through her nose, but fits the costume better. 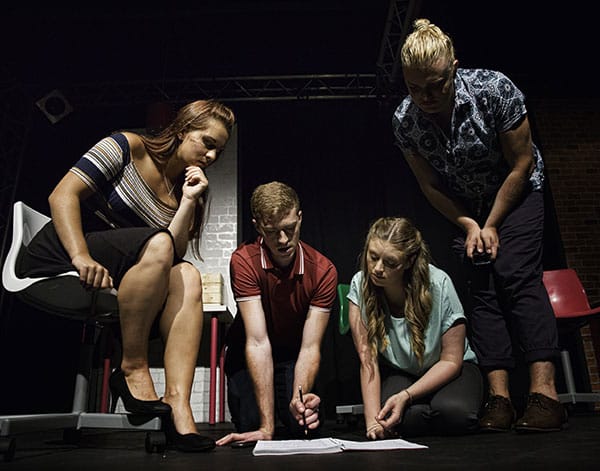 But this isn’t strictly theatre kid fare – Hunter Bell’s book is packed with enough witticisms and subtle gags to raise a smile from any audience member, all delivered with panache and boundless energy by the show’s plucky cast of four (five if we count keyboardist Larry, played by Musical Director Oliver Rew, carrying the show’s musical numbers with ease and great ability).

From Wicked to Avenue Q, no element of 21st century Broadway is safe. Pop culture references litter the script, placing it very firmly in an early noughties setting and yet indicating that [title of show] will go down the quirkily retro route as opposed to sounding dated. The cast go full pelt throughout the vivacious two-hour show, piling on the tributes to the musicals – we get jazz hands, outstretched diva arms, interpretive dance dream sequences and even a Les Mis-esque march in the opening number

Louie Westwood as Hunter truly shines in this performance. Camp and exuberant, every declaration is accompanied by a theatrical flourish, on the verge of breaking into song at any moment. Westwood creates a hilarious, over the top character without ever lapsing into being annoying. Daniel Mack Shand as Jeff serves as an excellent foil, reserved, knowing and self-deprecating. He performs with reassuring confidence and more than stands his ground against the larger than life personalities of his friends. 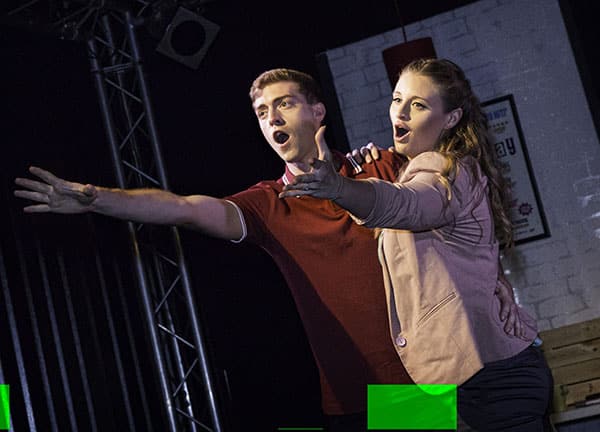 Malindi Freeman is an unexpected highlight as kooky Susan, fabulously droll during her big number ‘Die Vampire Die’. Susan is also hyper aware that she’s a character in a musical and plays it to hilarious extremes. Chloe Hawkins as eternal chorus girl Heidi showcases a strong, sweet voice and fine comedy timing.

A simple set, including the referenced four chairs and a keyboard, allows the action to flow effortlessly from scene to scene. Again, this is referenced by the characters, as they marvel at being able to flit between locations with nothing more than incidental music. The entire show is a riot of noise, laughter and energy, and best of all everyone involved looks as if they’re having the most ridiculous fun. It’s infectious and by the surprisingly touching finale the, audience is fully rooting for this oddball quartet.

All in all, [title of show] is simple, straightforward entertainment and an affectionate look at the process of just putting on a performance. As the characters, themselves remark – who says four chairs and a keyboard can’t make a musical?