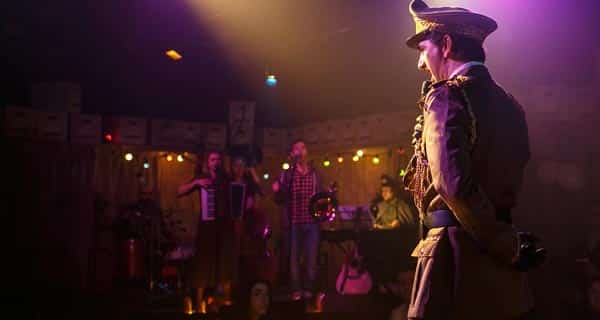 These Trees Were Made Of Blood
The Little, Southwark Playhouse
21 March 2015
3 Stars

Cabaret can mean many things to many people. There is a whole tapestry of expectation from the dizzy, gaudy heights of Liza Minelli’s green-fingernailed exploits in the film version of the great Kander and Ebb to the intimate pleasures to be derived from a solo artist performing a range of songs linked by beguiling or insightful patter. In the early 20th Century, a particular kind of cabaret came to prominence in Germany. Weimar Kabarett. A particular, political cabaret: sexy, full of dark, satirical humour, and presided over by a charismatic Master of Ceremonies, this was intimate and grimly ironical fare. Provocative and mirthful, but with revelatory resonances.

Kander and Ebb took the form of Weimar Kabarett and jazzed it up for their groundbreaking Cabaret. Now playing at the The Little, the smaller space at the Southwark Playhouse, is These Trees Were Made Of Blood, a work very firmly in the Weimar Kabarett mould. Devised by Amy Draper (director), Paul Jenkins (writer) and Darren Clark (music), all committed and talented, it sets about shining a light on the Dirty War of Argentina (1976 to 1983) and the fate of the Disappeared, young dissidents, critical of the military rulers, who were taken by the authorities and never heard from again.

The framework devised for the production is The Coup Coup Club (a clever play on the Kit Kat Club which instantly sets the groundwork for military dictators and oppression) a seedy nightclub where far-right ideologues gather to celebrate their victories over a generous tipple and crisply fried empanadas. It feels very otherworldly, as if Alice had fallen through a hole in shabby chic and landed in a place that had not seen a determined cleaner in a decade and where grime and clutter are good friends with tables, chairs, benches, and the enforced bonhomie of strangers is all pervasive.

The walls are lined with photographs of the Disappeared, sometimes covered by a slight, dirty looking shimmer of a curtain. A shelf runs around the top of the entire space, and upon that shelf nestles storage files which a clear bureaucratic purpose. There is a simple, charming old-fashioned kitchen area in one space; an elevated space opposite it where a super-cool multi-instrumented band plays and sings; and a central platform space where the MC dominates and other cabaret acts perform. Georgia Lowe’s design is impeccably underground, wonderfully, domestically bleak.

Unlike Weimar Kabarett or the Kander and Ebb masterpiece, however, the subject matter of the various acts which play out in The Coup Coup Club is not universally understood. It may be an indictment on the World but not everyone is aware of the shocking details surrounding the Disappeared. And without at least some sense of the background, These Trees Are Made Of Blood can’t work as well as it might.

There are two key things which one needs to understand for the show to work properly:

(a). The mothers of the Disappeared took vocal steps to make their search for their missing children a problem for the ruling military junta, and their marches and protests were effective and continue to this day; and

(b). The military utilised Death Flights to silence their enemies; drugging them and then throwing them, alive, from planes as they flew over the sea so that there they would drown and disappear forever.

If you don’t know those things, it can take a long while for the purpose of some of the songs and acts in The Coup Coup Club to make sense. Unlike Minelli’s Cabaret, where everyone knew clearly the background against which it was set, These Trees Are Made Of Blood educates about the atrocities it is enlivening in song and sketch as it goes along; a much harder task.

Nevertheless, the concept of The Coup Coup Club works very well. The artists work in their performance spaces as well as in and around the patrons. It’s uncomfortable at first, but the easy charm and relentless persistence of the performers becomes warming and familiar, lulling one into complacency – and thereby making one feel almost complicit in the dreadful truths when they come to be uncovered.

The pastiche and slightly hippie, slightly folk, slightly country music played by the small band assists immeasurably in creating a sense of warmth and frivolity which ensures that the intense, graphic horror of the personal tragedies which unfold is deeply felt. Clark’s music achieves its purpose admirably. Raw, intensely felt vocals from Josh Sneesby, Rachel Dawson, Eilon Morris and Anne-Marie Piazza provide a lush and sometimes painfully haunting backdrop to proceedings. Some of it is out of tune, but, curiously, that does not matter here. Indeed, it emphasises the conviction behind the songs.

About half-way through the first Act, after a lot of scene setting that does not make much sense without some detailed knowledge of the Dirty War, the central conceit gets going. A woman is looking for her daughter who has gone missing. The Coup Coup Club is used as a way to make the audience feel empathy with the mother; this is very clever and works a treat.

From that point on the Kabarett becomes a slow burning fuse, with powerful and disturbing vignettes along the way. The General’s power to silence and abuse increases and amongst an ocean of platitudes about unity, the need to suppress dissidence and the failings of the left, there are islands of unimaginable horror.

One moment that burns on the mind involved the Disappeared daughter (Charlotte Worthing) of the frantic, searching mother (Val Jones). In a disturbing scene, the General takes a very long, sausage-like balloon, and stuffs it into the girls’ mouth. It disappears into her entirely; it feels like a moment from a ghastly, pornographic snuff film. The use of the balloon is an example of Kabarett possibilities at their most powerful.

This is a brave and important theatrical work. It seems too long though, perhaps by thirty minutes, and would benefit from being a straight through event, where drinks and snacks could be ordered from tables in the old Weimar tradition, rather than being artificially amputated for an interval. Once the hunt for the missing daughter gets underway, the rolling momentum would be best unstopped.

London does not see political, polemic Cabaret such as These Trees Are Made Of Blood very often. This production is instructive and arresting. It makes you want to research the Dirty War and find a way to assist those brave, fearless mothers and their search for closure. And it makes you question why you found Barnett’s matinee idol General so compelling, reminding you forcibly that all that glistens is not gold.