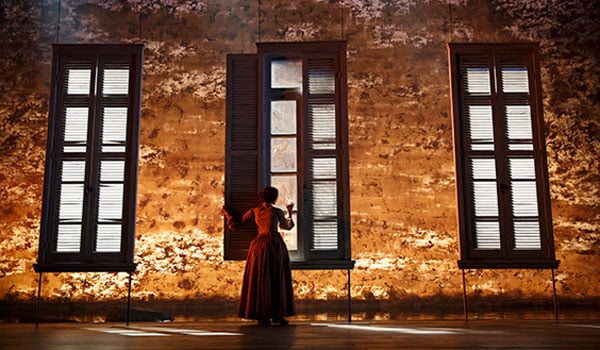 The importance of excellent scenic design is often overlooked, particularly in star vehicles or theatrical experiences where the motivation for attendance is assumed to be something other than a thirst for theatrical satisfaction. But, occasionally, the design becomes such a critical part of the overall success of the theatrical experience, that one wonders how plays and musicals are attempted without the best, illuminating set design possible. Recent random examples include Bob Crowley’s astonishing set for the Carey Mulligan/Bill Nighy Skylight, Justin Nardella’s insightful design for the London debut of Casa Valentina, and Robert Howell’s delightful work on Matilda.

So it is with the remarkable design from Beowulf Boritt for Roundabout’s production of Thérèse Raquin, a new adaptation from Helen Edmunson based upon Émile Zola’s famous novel, now playing at Studio 54, directed by Evan Cabnet. Boritt’s design is an integral part of the emotional and dramatic fabric of the production and, without it, this production might be limp and ineffectual.

Boritt uses space sensationally here. At times, the full extent of the stage is exposed, height, depth and breadth on show, signifying, deliciously, the freedom of the world. The floor extends to half the depth of the stage where it meets water which runs the length of the stage. The water represents escape, nature, cleansing. Its constant presence is tantalising and one yearns to splash and swim.

Four tall pillars frame one side of the stage and, unfeasibly delicately, suggest confinement, repression, imprisonment. Looked at one way, the stage might be a window to the world from a locked tower – an abstract, perhaps, of the kind of view Rapunzel might have gazed upon daily. 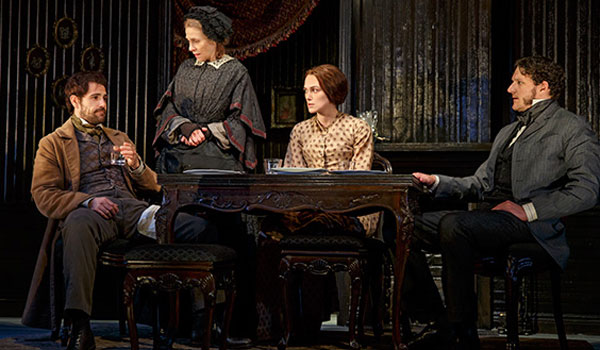 Projections change the vista from time to time. The most impressive, and almost suffocatingly overwhelming, is a riff on Monet’s famous Water Lillies (well, one of them). The image is instantly identifiable; undeniably French, emotive, sensual. But the palette is unfamiliar – Browns and golds; like a sepia image of Monet’s work to which potent colour is added. It’s hauntingly atmospheric.

Then, the house where Thérèse Raquin lives is flown in. All darkness, old-world fusty, cramped and cluttered, the two rooms we see seem very small against the largeness of the freedom space. The ceilings are low – the sense of being caged, trapped or imprisoned, surrounded by decay, is tangible; you almost feel like your own breath is constricted, for fear of inhaling the dust of the past that so freely swirls in those rooms.

Boritt’s set is so eloquent that pages of dialogue are saved by it. There is no need to labour the situation in which the titular character finds herself as the action begins. Just seeing her in the vast open space and contrasting that to the tension in the cramped household of Madame Raquin, as controlling a malevolent matriarch as can be found in modern literature, establishes clearly the desperate nature of Thérèse’s plight. 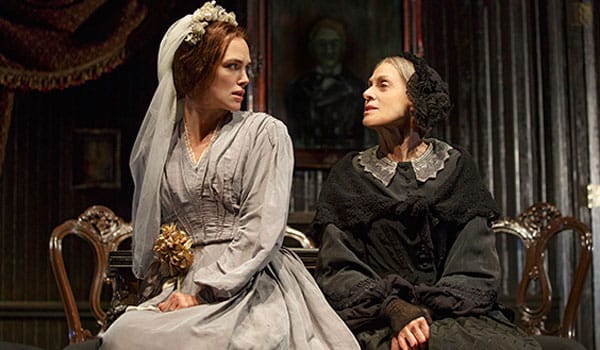 Forced to live with her Aunt and work in her shop following the death of her father, Thérèse is a picture of misery. She wants to flee her Aunt and her precise demands and experience life, but penury and the disapproval of society keep her in her place. Her Aunt lavishes her attention and money on her spoilt, irritating and hypochondriac son, Camille, and eventually Thérèse’s doom is sealed: she is wed to Camille, a loveless union that brings both unhappiness.

The mindless repetition and pattern of her life, including card nights each Thursday with Madame’s slightly pretentious friends, brings Thérèse to the edge of sanity. Then she meets Laurent, and old friend of Camille’s who now works with him at the Railway. Laurent and Thérèse begin a passionate affair, both desperate for the other. While she has Laurent, Thérèse is alive, properly, for the first time in her life.

Their assignations occur in Thérèse’s room whenever Laurent can skip off from work early. But when Laurent’s manager stops his early leaving, the two lovers are desperate to find a way to have each other, to be together. Driven by their insatiable need for each other, they agree to murder Camille so they can marry. They drown him, but before he dies, Camille bites Laurent’s neck.

As the neck wound festers, so does the bond between Laurent and Thérèse, as each is haunted by what has been done to Camille. Guilt and fear convert their passion to dangerous disharmony. Madame has a stroke and is rendered paralysed when she overhears the duo discussing what they did to her beloved Camille. Confined to a wheelchair, with really only her eyes moving, Madame’s watchful, knowing glares keep Thérèse and Laurent on a razor sharp precipice. Death proves the only escape they can accept.

Cabnet’s clear and perceptive direction is sound for the most part, and there is an emphasis on visual aspects of the production which make it something special. Thérèse, alone on a rock, contemplating escape; the awkward, near inept, murder of Camille followed by the images of the sodden lovers, breathless on dry land; Madame’s hand creeping into view, just as the stroke fells her; the restless sense of Camille’s spirit having possessed the bedroom where Thérèse and Laurent cuckolded him. Using silence as expressively as sound, Cabnet presides over a production rich in detail and incredibly tense to experience.

The only real omission is a clearer sense of the lust-ridden passion between Thérèse and Laurent. Given that their need for each other sexually is so intense that murder is more viable than going without each other, Cabnet makes no real attempt to convey the sense of that. There are no scenes where clothes are ripped off the lovers by each other, no nakedness, no sense of repetitive, compulsive carnal encounters: yes, the affair is depicted, but in a very buttoned up way, which curiously undermined the power of the plot.

There are no complaints about the casting. Judith Light is in sensational form as the manipulative Madame, portraying a clear sense of venom dripping from every helpful suggestion or smiling acknowledgment. After the stroke, Light’s performance is truly mesmerising: it is difficult not to watch her expressive face and eloquent eyes radiate feelings and emotions. The scene where she tries to spell out with an alphabet her son’s murder is absolutely gripping. This is a phenomenal performance.

Gabriel Ebert is properly ghastly as the smarmy, intolerable bore, Camille. He makes your skin crawl the way Thérèse’s surely must have. It’s fascinating to watch, because despite everything that is dire about the character, Ebert manages to navigate it so that when he is murdered, it is truly shocking and affecting. So indelible is the thought of Camille that Ebert paints, that the haunting sequences reverberate with insidious power.

Matt Ryan is extremely attractive as Laurent, and one has no difficulty understanding Thérèse’s overwhelming desire. It’s not just Ryan’s physical beauty, but the way he makes the character insinuating, beguiling and slightly, excitingly, dangerous. It’s a terrifically well-judged, very masculine performance which sits in stark contrast to Ebert’s perfectly pitched Madame’s boy.

There are excellent turns too from Jeff Still and David Patrick Kelly. Kelly, in particular, makes the most of a key dramatic turn, creating an ice-cold moment of pure panic when the secret of Camille’s murder seems set to be discovered. 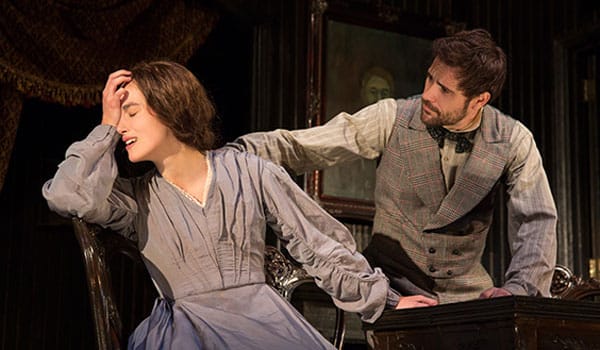 But the hard work of the play rests on the shoulders of ten actress playing Thérèse, here Kiera Knightley, making her belated Broadway debut have twice appeared in the West End. Her film experiences help Knightley here enormously – she can make a silent gaze speak volumes and she is at home with creating visual images of stunning power. She is silent for much of the play, but not the slightest bit in the background for that.

She makes the most of every opportunity, whether walking behind Camille by the sea, or squaring off with Madame or being intoxicated by the presence of Laurent. And when she does speak, she makes every word count, giving a lyrical beauty to many passages and a tired, humiliated fear to others. The final breakdown of Thérèse is immaculately judged, truly impressive.

Jane Greenwood provides exceptional costumes, most of which are in shades of black, grey or brown, and which pick up the palette in Boritt’s scenery. Hats off to Keith Parham for an extraordinary lighting design which shimmers through the emotional scale as events play out: dark, cold light; hot, lusty light; warm, suffocating light; gentle rays of freedom and the grey that comes when things are bleak. It’s rare to experience lighting as emotionally tuned as Parham’s is here. It is a major achievement. Josh Schmidt’s original compositions effectively compound the emotional impact of the production.

Zola wrote a terrific, psychological thriller and Edmundson’s adaptation here is faithful to his intent, tender and terrifying in equal measure. Cabnet’s top notch cast do great work, enlivening the many interlocking threads, and making a powerful, theatrical treat full bodied. It could do with more emphasis on the carnality which unlocks doom for Thérèse and Laurent (Camille too) but given the wonderful acting, sets, costumes and lighting, no one should feel too short changed.